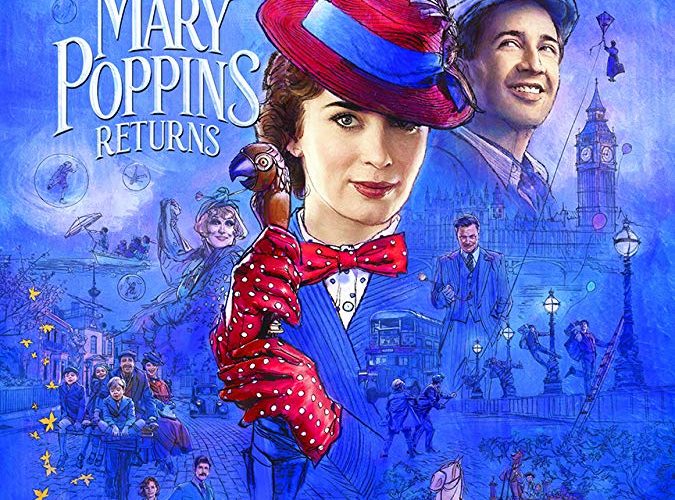 Mary Poppins Returns can’t possibly be expected to transcend its historical foundation. It’s been over half a century since the Disney original seeped its way into the collective consciousness. Julie Andrews is all but synonymous with the stern, yet cheerful magical nanny. Songs like “Spoonful of Sugar,” “Supercalifragilisticexpialidocious,” and other Sherman Brothers’ creations are now musical standards. Hence, any long-in-the-making, Disney-stamped sequel will inevitably be forced to pay homage to the original and re-introduce the concept of Mary Poppins to a new generation. Mary Poppins Returns serves too many cultural and financial masters to be its own beast, so it’s forced to make space in a middle ground circumscribed by nostalgia.

While that’s not necessarily a deal breaker, director Rob Marshall and screenwriter David Magee don’t help matters by tying the film to its predecessor in almost every way imaginable. It’s one thing for the macro narrative structure to walk the same path, but many of the musical sequences have one-to-one comparisons with those in Robert Stevenson’s original, e.g. an extended hand-drawn animated sequence, a dance number a la “Step in Time” featuring lamplighters instead of chimneysweeps, and numerous instrumentals that quote from the Sherman Brothers soundtrack. Ideally, these allusions serve as tributes, but they really just force comparisons with the 1964 film to which a 2018 sequel can’t measure up. Composer and lyricist Marc Shaiman has had plenty of success in the past (Hairspray, sure, but South Park: Bigger, Longer & Uncut stands as one of the great modern movie musicals), but his soundtrack for Mary Poppins Returns can be charitably described as forgettable. Unfortunately, the Sherman Brothers’ shoes are too big to fill.

Emily Blunt, however, fills Andrews’ shoes with remarkable aplomb. Her take on Poppins mostly amounts to adopting Andrews’ cheery heart while putting a sassy spin on the character’s stern demeanor, and yet her radiant energy effectively keeps the film afloat. Like in the original, she essentially plays a mediator, someone who facilitates peace in a household fraught with uncertainty by reminding its inhabitants of imagination’s awesome power. She imbues the children with a sense of wonder that had been diminished by circumstance and reminds the adults of what it was like to be young. Blunt succeeds because she never attempts an impression and merely channels her own style into the iconic character.

The original Mary Poppins privileged spectacle over narrative; Stevenson essentially tied together musical sequences with a thin redemptive storyline for the curmudgeonly George Banks (David Tomlinson). Mary Poppins Return offers a much more focused story: Mary Poppins (Emily Blunt) returns to Cherry Tree Lane where a grown-up Michael (Ben Whishaw) raises his three children (Pixie Davies, Nathanael Saleh, Joel Dawson) with the help of his sister Jane (Emily Mortimer) in his childhood home. Michael is on the verge of losing his home following overdue loan payments and must come up with the enormous sum in full before the end of a five-day deadline. The plot presents an interesting emotional foundation: Michael, under financial strain and contending with the recent death of his wife, exhibits shades of his strict, distant father, especially when he takes out his frustrations on his otherwise angelic children. There’s a potent idea somewhere about how grown children often assume the worst qualities of their parents and how it requires active work to rid themselves of those bad habits. Neither Marshall nor Magee have any interest in developing that theme any further, though, so the film relegates the Michael character into a superficially tragic niche, forcing Whishaw to act like he’s on the verge of tears for the entire film, before quickly redeeming him by the end. Since Mary Poppins Returns has such a vested interest in playing within Stevenson’s sandbox, it’s a shame they squander an opportunity to actually engage with the emotional fabric of the original film.

If fans of Mary Poppins aren’t turned off by the sequel’s slavish devotion to the original film, they will probably be delighted by the many references in the sequel: the return of Michael and Jane’s kite, Admiral Boom and his canon sitting atop the roof as if they’ve never left, the eye-rolling reveal of what happened with Michael’s tuppence, etc. The 92-year-old Dick Van Dyke makes a late-period cameo to briefly sing and dance again, and, yes, rest assured, it’s quite delightful. Ironically, Van Dyke’s nonagenarian vigor puts Lin-Manuel Miranda, who plays his younger lamplighter counterpart, to shame. Miranda shares Van Dyke’s dreadful cockney accent but can’t be appropriately goofy, so he mostly relies on his own back of tricks to middling success, i.e. there’s a Hamilton-esque number that’s profoundly out of place in the film.

Though the film’s fidelity to its forbearer limits its potential, Mary Poppins Returns’ new characters suggest that a more stand-alone take wouldn’t have been much better. Colin Firth plays the gaslighting villain, a PG-friendly Trump avatar whose badness isn’t contextualized as much as assumed. Meryl Streep makes a one-scene appearance as Poppins’ cousin, a character that might as well be ripped from a crappy late-period Tim Burton film, and the less said about her or her God-awful musical number the better. An Angela Lansbury cameo was seemingly created for Julie Andrews, but nevertheless oddly remains in the film despite Andrews’ non-participation. These creations are transparently designed to pander to adult audiences, or, worse, pad out an already poorly paced film. Honestly, Mary Poppins Returns is better when it’s working within familiar territory.

As much as Mary Poppins Returns frustrates upon analysis, it’s far from unwatchable in the moment. Certain sentimental scenes, like Whishaw’s solo about his late wife, work in spite of the corrupted frame. The animated sequence only intermittently works as spectacle, but it’s nevertheless an aesthetic achievement that serves as a reminder of Disney’s bygone triumphs. The kids are cute and not that annoying. While it’s not, as Blunt implied it could be, a “great unifier” in Trump’s America, there are much worse saccharine escapes. Ultimately, there’s just too much extra baggage for Mary Poppins Returns to soar to great heights.