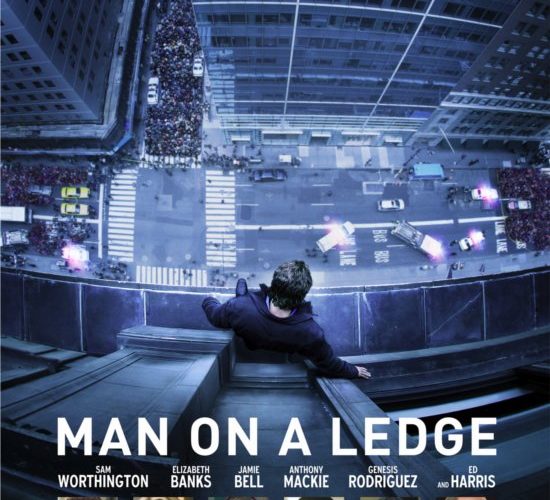 [Review] Man On A Ledge

Man On A Ledge is a film that will be revered in Screenwriting I classes all across this great nation. Like a beacon of hope, this “action thriller” will embolden film students to shrug off their professor’s instance on featuring characters instead of caricatures, avoiding deliberately on the nose dialogue and setting up credible conflicts with a true sense of risk involved. This film goes to great lengths to show that none of these issues seem to get in the way of turning your amateur script into a big-budget Hollywood flick. Congratulations on the ignominy, screenwriter Pablo F. Fenjves!

The film is less of a standalone piece and more of a composite of other, far better genre films, all melded together like money-making stew. A dash of The Fugitive, a heaping helping of Inside Job and just the right amount Dog Day Afternoon (with requisite “ATTICA!!” homage), then add a ledge and some Oceans 11 just to hedge your bets. What the film lacks in plot it lacks equally in dialogue. It’s jam packed with Movie Lines, the kind of bon mots people only say when they’re a projected 2D image, which helps explains why no character has any depth, physically or otherwise. Sam Worthington stars as Nick Cassidy, a now-imprisoned cop who is set up as a fall man for David Englander (a mustache-twisting Ed Harris), a formerly rich real estate mogul who turned into a bankrupt real estate mogul during the financial crash. His get rich quick scheme involved his $30 million diamond escorted by a flank of cops, two of which were dirty; the other one was Nick. Englander says Cassidy stole the diamond, cut it into pieces, and sold it on the black market. Now Cassidy is imprisoned, his last appeal denied, while Englander is about to build a brand new building in Manhattan with the $40 million from Lloyd’s of London insurance recoup. Cassidy is convinced the diamond never left Englander’s hands (or, more specifically, the large, fortified, Mission:Impossible-styled safe room at the top floor of his office building).

What’s an innocent man to do? Using a leave from prison to attend his father’s funeral, arranged by former partner Mike Ackerman (Anthony Mackie), he escapes and sets into motion a multi-tiered plan into action. Nick stands on the ledge of the Roosevelt Hotel acting as a bright, shiny object while across the street, his brother Joey (Jamie Bell) and girlfriend Angie (Genesis Rodriguez) break in to Englander’s compound in order to steal the diamond, “for the first time.” As they pull off the caper (communicating via radio), Nick tries to prove his innocence to Lydia Mercer (Elizabeth Banks), a negotiator who carries a recent black mark: not talking another New York cop off the ledge. Through twists and unexpected turns, they attempt to clear Nick’s name before he falls–or gets pushed–off the titular ledge. Man On A Ledge is lousy with great actors stuck in lousy, unfulfilling roles, including Titus Welliver as the Cop In Charge On The Ground; Ed Burns is the Cop Who Begrudgingly Learns To Respect Mercer; and Kyra Sedgwick as the Over-The-Top Sleaze Journalist (her live report sign-off gets the best reaction in the film, take that for what you will). All of them play a factor as the movie winds towards its inevitable conclusion, a game of connect the dots that any routine film watcher could pick up on.

With such talent in front of the camera, the fault for this has to be leveled on the heads of those behind it. As I’ve already mentioned, the script, with clunky dialogue and flat characters, doesn’t help. But the actors don’t seem to be allowed to stretch the material to make any sort of interesting choices. That’s no doubt aided by the lack of expertise from first-time director Asger Leth, a documentarian making his debut in the realm of fiction. For all the inventive ways he and cinematographer Paul Cameron shoot building exteriors (and lord are there many), he does not get that same kind of dynamism from any of his actors. There seems to be a rigidity in each performance, with each actor given a fixed note to play throughout the film, which leads to a rather dull symphony when orchestrated together. Notice the extra fidgety facial work Worthington feels compelled to do while on the ledge, or how Ed Harris just scowls and grunts all of his dialogue no matter the situation or locale. Poor Ed Burns spends two-thirds of the movie telling Elizabeth Banks what a poor negotiator she is before spending the remaining third telling repeating some form of “y’know kid, you ain’t half bad,” done with the zeal of a man throwing a tennis ball against a wall for an hour. And it’s hard to blame him.

This puts a lot of onus on the plot to carry out the general arc, which is more perplexing stumble than exciting train ride. In a film like this, logistics are not extremely important, but a general idea of who these people are would help, especially in relation to the break in. The heist is built up to be something that can only be pulled off by experts, which Joey and Angie don’t exactly look like. They’re just competent enough to pull it off, but incompetent enough to make us sweat.

But how does Nick know so much? I had two uncles who were NYC police and they barely know how to set a thermostat, let alone how to disable the high security alarm system remotely. Saying “we’ve been practicing for a year” doesn’t make these questions go away; it makes me wonder “where? how? could we see it?” which shakes me right out of the film. Luckily there’s just enough of an excuse to get Miss Rodriguez into her underwear, which did, in fact, re-engage me. Sadly, that’s a trick you can only use once.

For all of this film’s myriad faults, I can’t say they didn’t deliver on their promise. There was, in fact, a man on a ledge. If only there was a better film surrounding him.

Man on a Ledge is now in wide release.