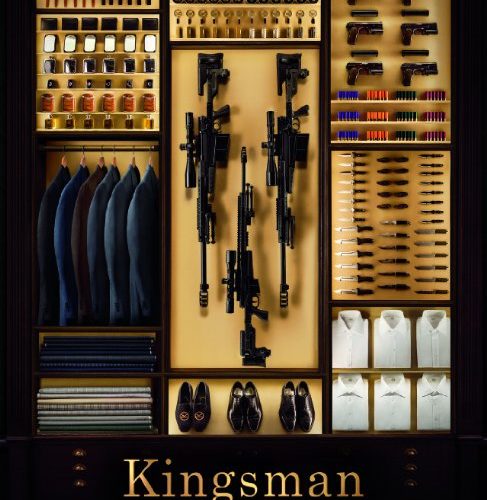 Kingsman: The Secret Service, the latest pairing of comic scribe Mark Millar and director Matthew Vaughn, wants to sell itself as a fresh and irreverent take on British spy antics, a silly shot-in-the-arm that harkens back to the campier days of James Bond. With the genre favoring more stoic and gritty explorations as of late, it’s an initial thrill to see Colin Firth decked out in a bespoke suit, umbrella in hand, dispatching bad-guys as if we lived in a world where the most commonly know Avengers were still Emma Peel and John Steed.

Fun while it’s running, Kingsman attempts to create a forgotten and likely extinct world of clandestine nobility and pseudo-Arthurian morality, grafted onto the gentleman spy motif as it was in the 60’s and 70’s. Very loosely adapted from Millar’s graphic novel, the film wastes no time in trying to sell itself as the next Kick-Ass, albeit with a distinctly British sheen. A pair of opening scenes—one moving from the Middle East to a London flat and the other an attempted rescue mission at a snowy mountain cabin—thrust us into a hyper-violent world that exists somewhere in the limbo between Bond and Peel and goofier brethren like Austin Powers and Derek Flint. Firth, charming as ever and appealingly outfitted as a capable action hero, is Harry Hart, one of the titular Kingsman, code-named Galahad, seeking out an angry young street thug named Eggsy (Taron Edgerton) and giving him a makeover as a suave spy. Following a template similar to the first Men In Black movie, young Eggsy is recruited from his dead-end life and given a peek into a world that exists under the surface of our own, all of this done not so much on his behalf, but on his father’s, who once gave his life to save Galahad and the other agents. Located under the façade of a tailor shop, the Kingsman base of operations is exactly what you’d expect it to be; posh, luxurious, decked out with gadgets and weaponry, and running on an archaic system that sees all of its participants outfitted with names from the legend of the Round Table, including tech expert Merlin (Mark Strong) and figurehead Arthur (Michael Caine).

Vaughn slickly rehearses his X-Men: First Class formula for the early going where Eggsy and other young recruits get put through their paces in the Kingsman recruiting process. As familiar as all of this is, Edgerton’s fresh-faced but plucky performance and Vaughn’s visceral tests make these sequences energetic and nimble instead of tedious. Although it’s eventually overshadowed by the bloodshed of the second half, there’s an extremely effective sky-diving scene that involves the trainees being dumped into the air and then informed that one of them doesn’t have a parachute. As they speed towards the ground, Eggsy rushes to improvise a plan to get them all safely into the target zone. Strong and Caine pull nice supporting work here, while Firth is off indulging in a Fleming-inspired foiling of a megalomaniacal scheme.

The villain of the piece is Valentine, played by Samuel L. Jackson sporting a lisp and a track-suit, a media mogul who’s moonlighting as blood-shy, but homicidal, environmentalist. At Valentine’s side is his doting lackey Gazelle (Sofia Boutella), a parapalegic who now has deadly blades for legs. The sight of Boutella galloping along like an inspirational ad, only to then slice out someone’s throat or bisect a human head, is absolutely silly but just as much fun as watching the fifty-something Firth dispatch entire rooms of individuals as if he were duckpin bowling. All of Kingsman plays at this tight-wire act of balancing the gratuitous and would-be subversive with what is essentially wholesomely generic comic-book boilerplate.

At a certain level, the movie works, especially in the first half, where Firth shines as Harry, driving the audience to reconsider both he and his character. There’s a helping of James Bond, but there’s also Mr. Darcy under there, although the leaden script keeps moving away as we start to get a look under Harry’s knightly armor. It’s here also, that most of the comedy actually works, without descending into the smug self-satisfaction of the late chapters. In a particularly amusing scene, Harry tries to prepare Eggsy for the transformation he’s about to embark on, citing more modern rags-to-riches grooming films like Trading Places and La Femme Nikita, none of which the young man has seen. An intrigued Eggsy, though, does ask “So it’s like My Fair Lady, then?” A dinner between Valentine and Harry features a fast-food feast that’s ironically indicative of everything wrong with the mindset of both spy and psychopath.

The very tenuous base upon which Kingsman is built threatens to collapse in what is sure to be the film’s most controversial scene. Firth enters a Westboro-style ultra-conservative church with a hate-mongering pastor, and the next five to ten minutes feature a strong and harrowingly realistic massacre that transpires in a digitally doctored long-take that feels like it came from the early days of Sam Raimi or Peter Jackson, but with more queasy malevolence and serious intent. There’s a lot going on here, causing us to take inventory of what we are watching and briefly turning the tropes on their heads, eliciting the audience to think about its own attitudes and deeply-held convictions towards the violence onscreen. It’s an interesting scene, but it’s not quite right for the flimsy and slight little movie that surrounds it, and given the context, off-putting and a tad condescending. The moment that follows–finally depriving the film of it’s only magnetic center– hammers the smug tone home further, and before long, Vaughn has shuffled away from the edginess, and is once more capably aping the genre milestones for all they are worth.

For a mid-February release, Kingsman: The Secret Service is a modestly entertaining romp that will probably delight those who like to see a genre turned upside down so all its lunch-money lands on the ground, and purveyors of kinetic and no-holds barred gore will also get a treat. For someone who might actually be interested in the concept of the Kingsmen, in the ideas behind the film, and in following Firth’s Harry to his logical destiny, the film is less satisfying. Several poorly contrived twists dampen the set-up and structure, and Millar’s signature attitudes towards women are not so easily wiped away here either. For all of the attempts to shock all sensibilities provide a real upset to the status quo, Kingsman ultimately fails to leave its audiences shaken or stirred.