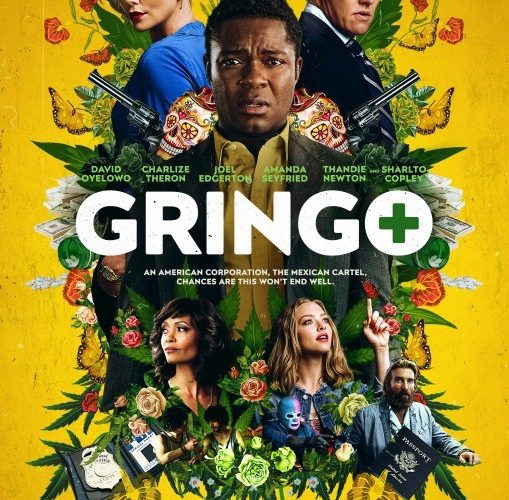 You wouldn’t be wrong to view the trailer for Gringo and think, “I’ve seen this before.” You wouldn’t be wrong to assume it gave away the entire plot either — mild-mannered American is used by his ruthless bosses to perform a dangerous job they refuse to attempt and is kidnapped by a Mexican cartel for his trouble. Will he survive the chaos? Will his bosses save him or extricate themselves from blame? Or will the hapless victim of an increasingly escalating ordeal somehow luck into an escape with or without an avenue towards revenge upon those who’ve done him so very wrong? It’s the same generic potential outcomes every movie with a similar conceit contains and yet the answer isn’t what will keep you sitting until the end.

Matthew Stone and Anthony Tambakis’ script is less interested in Harold Soyinka’s (David Oyelowo) fate than the journey towards it. While the trailer does provide the blueprint of the whole, it actually masks just how much of what it shows is independent from the rest beyond sharing Harold as a main target. Yes, he’s sent to Mexico and, yes, the cartel has its sights on capturing him, but there’s a good hour and a half in between both of those truths. Director Nash Edgerton isn’t therefore handling a traditionally linear propulsion that follows this one man. He’s instead juggling a tapestry of mini adventures that will inevitably converge upon Harold through coincidental run-ins and connections seeking to bottle an otherwise quickly sprawling cast list of selfishly shady figures. Are the over-the-top antics in play worth your time? Since the endgame is such an afterthought as far as entertainment value goes, the film succeeds or fails with its middle act’s insanity. You’re either going to enjoy Harold’s put-upon nice guy shtick as his entire life unravels before his eyes or he’ll grate on your patience. You’re either going to embrace the absurdity of his bosses’ (Joel Edgerton’s Richard Rusk and Charlize Theron’s Elaine Markinson) actions as hilarity or recognize that their stereotypical immoral characters would feel more at home in a caricature farce like Dodgeball than the black comedy Gringo strives so hard to be. One minute a grown man is screaming because of a needle and the next has someone bluntly shot dead in the head.

I was with it for the most part because I enjoy a romp that’s built from innumerable double-crosses and ulterior motives. Whether it’s Miles (Harry Treadaway) talking his cloyingly innocent girlfriend Sunny (Amanda Seyfried) into accompanying him on a risky criminal endeavor sold as vacation or Richard’s brother Mitch (Sharlto Copley) reconciling his old mercenary past with his new altruistic Peace Corps motivations when weighing Harold’s life against a lucrative payday, you know the potential for things to go bad always outweigh the alternative. Stone and Tambakis have crafted their story to intentionally fall apart at the seams, leaning heavily on the comedy through fear those with their lives in danger facilitate. The film is therefore cruel to its characters because its laughter requires it.

My issues stem from its desire to want belly laughs too. My problem isn’t that doing so risks subverting the severity of the situation, but the mean way in which they achieve it. I’m talking Theron’s mockingly derisive Helen Keller impression that comes out of nowhere and a completely wasted Thandie Newton as Harold’s wife Bonnie being used as a prop at best and wearer of a fat suit at worst. It’s one thing to want us to laugh at Harold’s fish-out-of-water patsy, but another to believe handicaps are inherently funny enough to sprinkle in for color. Gringo oversells its “bad people living large by doing bad things before ultimately walking towards karmic retribution” messaging so that the film eventually becomes meaner than the characters within.

The “fun” suddenly begins to fall flat either through repetition or the dwindling number of people we can truly root for. Endearing characters are generally introduced only to turn self-serving enough to be expendable to the plot’s ambitions of confronting Harold with a choice between listening to his heart (the voice of his father saying “Do the right thing”) and his id. I’ll give the film credit because even when it needs Harold to do the “wrong” thing, the ripples of his charity and empathy from the beginning offset any potential ramifications. Every action — no matter how small or seemingly insignificantly — means something by the end because no one onscreen is who he/she appears to be. Friends can always be found in unlikely places. Sadly there are simply too many characters involved. The subplot with Miles and Sunny is the definition of excess as its only payoff is giving Harold another “pure” character to remind him that the world wasn’t completely lost. The more pieces there are, the “cuter” the screenwriters must be to fit them together. Coincidences become ham-fisted excuses to remind the audience of characters’ existence rather than add anything to the story. When one proves expendable due to running his/her course, they disappear until the ending can manufacture one last chuckle in bringing them back. Sometimes you can’t help but feel the wheels turning whenever Harold is off-screen because Stone and Tambakis have to figure out a way to circle back to him no matter how convenient.

Harold becomes a secondary character at times as a result. This is a shame because he is the only person in play that we can latch onto as more than a cartoon. So while we may laugh at the others independent of their connection to him, those sequences always feel superfluous because they aren’t all concerned for him. Oftentimes characters are still engaged in subplots that already served their purpose. Is the endgame of Theron’s Elaine worth the extra time spent setting it up at the expense of sacrificing our interest in Harold? No. Everyone but him is objectively bad and reinforcing this fact only wastes time. Watching bad people be bad gets tiring, especially when there’s someone like Oyelowo transcending the material to lend complexity and uncertainty.

Gringo is now in wide release.