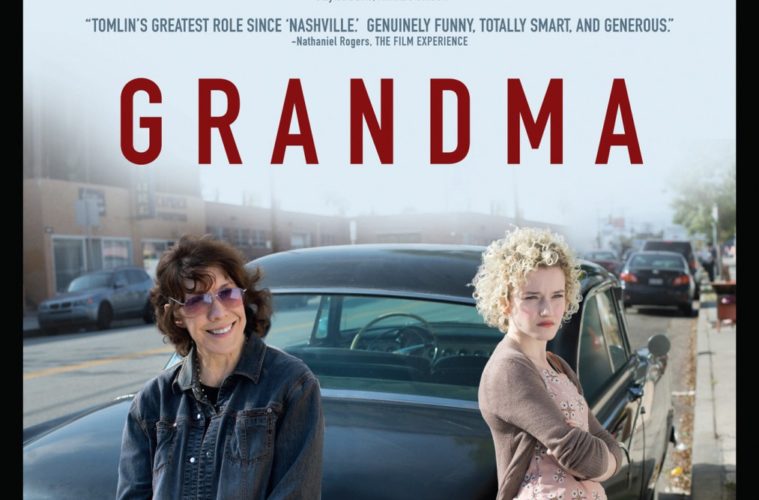 Lily Tomlin has had more than just one “role of a lifetime” in her filmography, but in writer/director Paul Weitz’s Grandma she’s given the type of project that celebrates an entire career. A little gem originally unveiled last January at Sundance, Grandma is a crowd-pleaser potent with Tomlin’s DNA, from the razor-sharp wit in dialogue to the way the movie itself speaks to sometimes pointed, but necessary ends.

Reuniting Weitz with Tomlin after 2013’s Admission, (in which she played a single, very liberal woman who raised her on-screen daughter Tina Fey alone), Tomlin’s Elle is a woman who was arguably more modern well before many others, liberated as an artist and a human being. In this story, she’s a poet and essayist, a lesbian, a mother (and yeah, a grandmother). The film introduces her breaking up with her girlfriend Olivia (Judy Greer, yet again fantastic with just a few scenes), who has been unable to fill the void of Elle’s deceased, great love, Vi. After this break-up (of which Weitz treats as a prologue, driving score and all), Elle’s high school-age granddaughter Sage (Julia Garner) arrives at her door, and needs help. Sage needs money for an abortion, and is afraid to ask her distant, workaholic mother Judy (Marcia Gay Harden, working with an underwritten character). Elle turns out to be of no use – she has no cash, and she’s chopped up her credit cards. However, understanding Sage’s pain in this situation, Elle unwraps the car she had with Vi from years ago, and the two set out to find some money.

The movie’s central dynamics are thoroughly established from even a glance of the poster – those of older and younger, the experienced versus the unexperienced, etc. Sage is like many teens in other movies that include older leads (such as Jonathan Demme’s recent Ricki and the Flash) – she’s ignorant but with a mind ready for molding. Nat Wolff, of recent teen romance Paper Towns, even shows up to put on teen-face as the one who got Sage pregnant, becoming a cheap punchline about how the youths today are more or less cheesy thugs.

Meanwhile, Tomlin’s Elle has an immediate wiseness in seemingly all things but relationships, and a self-certainty about all the bozos in the world. Sage, despite being the onus of this journey, is just there to listen to Elle’s acerbic tongue. Or watch, as when it comes to Elle getting an impromptu tattoo, or getting confrontational at a coffee shop that used to be the site of a women’s clinic. When the story goes “bad grandma” on its thin narrative in such moments, the comedy is hit-or-miss. For example, Tomlin emasculating Wolff is a throwaway victory. The same with when she steals his drugs on the way out.

But Grandma sets itself apart from similar curmudgeon road trips like Alexander Payne’s drowsy Nebraska or Ted Melfi’s god-awful St.Vincent (of which this film is miles ahead more interesting) when its cheap-ish entertainment leads way to certain name-drops and vital conversations. Even when Sage thinks that “The Feminine Mystique” is an X-Men character, Elle’s shout-out to Betty Friedan’s essay wins out over its tacky set up. This attitude becomes a positive attribute of Grandma, via Tomlin – never afraid to speak its mind, even on a soapbox in the middle of a romp. The scene in 9 to 5, in which Tomlin speaks directly to Dabney Coleman’s sexist boss on behalf of the outraged female office worker, has the same spirit. In both films, decades apart, it only enhances the goofy, bigger picture, and proves significant.

Weitz’s original screenplay also stands out by expressing a different flaw within an older woman who isn’t on the path to enlightenment, because she’s already paved that. Grandma curiously shows the complications within Elle’s previous declarations of independence, and how they’ve hurt those from the past and present who love her. There is a fantastic scene that involves Sam Elliott, playing a former flame of Elle (“I always liked women, I just didn’t like myself” she later explains to her granddaughter). Elle goes to Karl for money, and it’s the first time that they’ve seen each other in many years. There’s an arrogance within her to even approach Karl, who has now become like a self-proclaimed Biblical patriarch, and wounds are still visible from their relationship ended many decades, and relationships, ago. The scene is too magnificent to spoil, but it shows Weitz’s strengths in painting an image of a character not seen often as the lead of comedies – the already-liberated woman, but the complicated decisions that come with breaking away from gender roles. Elliott, per usual, is up to portray with staggering peacefulness an intricate image of a modern man. Grandma is very vocally feminist, pumping the clenched fists of its beliefs. It takes no crap in 2015 about the circumstances of abortion, either the horrific experiences had by women during the liberation movement before clinics were available, or the timeless right that women have to do what they want with their bodies. But there’s a catch with Weitz organizing this event – all of the sudden, that Betty Friedan name-drop only reminds the viewer that the male gaze is staring back at Grandma, a very personal story crafted from outsider’s experience. And Weitz isn’t just writing characters for women, he’s directly interacting with their placement, and their connections to each other. As the recent popular Twitter hashtag #ThingsFeministMenHaveToldMe lays witness, all of that can be a sticky business. Luckily, for Weitz and for us, he has the likes of Tomlin endorsing his compassionate adventure, along with a revolving door of appearances that include Colleen Camp, Elizabeth Peña, and Laverne Cox (Orange is the New Black).

Defined by Tomlin’s ever-refreshing sensibilities, Weitz’s film is a rewarding venture for anyone who has ever felt refreshed by her uncommon presence, a movie that completes its images of the past by not using flashbacks, but directly evoking Tomlin’s own. While the yawning shenanigans within Grandma work better for its marketing, Weitz’s film is the rare crowd-pleaser that prevails as an overall movement, with one hell of a leader placed front and center.

Grandma is now in limited release.