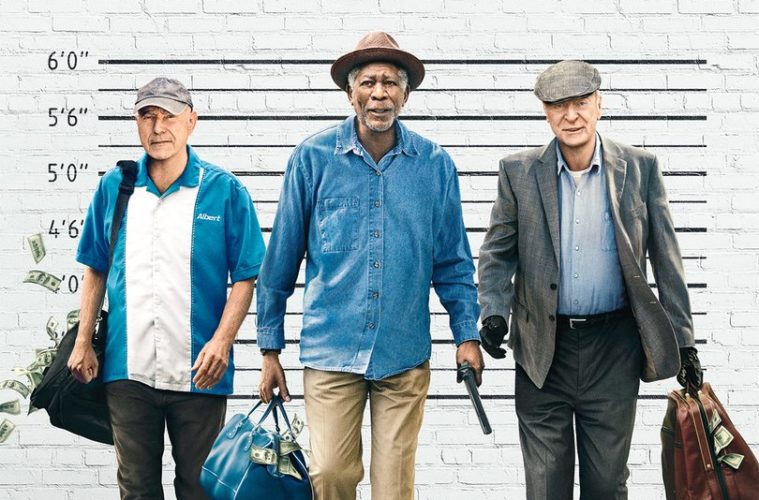 Review: ‘Going in Style’ is a Serviceable, Formulaic Remake

Back before Martin Brest was placed into forced retirement post-Gigli, he had a run of comedy hits including Midnight Run and Beverly Hills Cop. The first of these studio pictures, however, was a heist flick starring eighty-year old George Burns, seventy-year old Lee Strasberg, and fifty-year old Art Carney as clean-nosed roommates inexplicably looking to rob a bank. The fun was in the preparation—a rejuvenated excitement in their lives. The drama came via a long, winding road of tragedy afterwards. So of course Warner Bros. thought about how they could cull together a twenty-first century trio of octogenarians to do the exact same thing. Have them decide to rob their own bank for revenge and ride into the sunset for a senior citizen Hell or High Water.

Well, the result isn’t quite that successful so don’t start handicapping Going in Style for any Oscar nominations just yet. It sadly doesn’t have the dramatic weight considering screenwriter Theodore Melfi pitched the studio on giving society a much-needed “win” after being kicked in the teeth for too long by mortgage loaners. He therefore leverages his film’s success on our delight in laughing at old people doing old things like struggling to exit a bucket-seated chair or forgetting where they are (poor, wasted Christopher Lloyd). And let me say that the audience in my theater ate every single easy joke with a spoon. They thought about their grandparents turning criminals. They thought of spouses and siblings, mothers and fathers. They were most likely fans of Last Vegas, too. Directed by Zach Braff in his first gun-for-hire job not made for TV, the camera must only capture the elderly antics of his cast for success. Besides a quick transition from a hand-drawn map of the bank’s interior to the actual locale, directorial flourishes are absent—a godsend to those who dislike Garden State and Wish I Was Here, a tragedy to someone like me who loves both. Luckily his cast oozes charisma with Michael Caine as ringleader Joe, Morgan Freeman as ill, loyal friend Willie, and Alan Arkin as the unsurprisingly curmudgeon Al. Despite their criminal ambitions stemming from the uninspired dissolution of their pensions (their former company sold overseas, the bank taking their money to pay creditors and profit), we do actually sympathize with their plight.

The problem is that we don’t necessarily care about it. Whereas the skit-like interludes progressing Joe and his buds forward through hijinks work, all the heartstring-tug relationships exposed and introduced without one iota of originality don’t. So each time I genuinely enjoyed myself like with Josh Pais hamming it up as the “villainous” bank manager opposite Caine’s energized onlooker during an opening scene’s robbery (Joe had to get the idea from somewhere), I inevitably was made to languish through the pitiable tales of family living far away and granddaughters saddled with deadbeat Dads. The latter stuff may get some emotions flowing for you, but seeing so clearly how each instance is really meant to set-up obvious cause and effect scenarios loses it points on the authenticity scale. It’s a hoot to watch the trio stumble through a practice run at “being bad” by robbing Kenan Thompson‘s grocery store. The bank heist is also an effectively drawn and nicely orchestrated plan with John Ortiz‘s Jésus training them (for a cut) while they use their abundance of smarts to cover all angles thanks to age, Law & Order reruns, and a career in steelwork (write that formula down). But how do these things happen? That store is where Al’s love interest Annie (Ann-Margret) works. Jésus is an acquaintance of Joe’s ex-son-in-law/absentee father. Everyone is therefore a pawn. And because the script relies so heavily on a foolproof heist, this coincidental nature subverts the drama while the desire for an exacting nature renders the senior comedy absolutely puerile.

Saccharine drama with little room for misfortune all while dementia jokes land to giggles is a formula for success these days, though, so congratulations. They set out to make an innocuous escape starring three Oscar-winning actors that delights without any heavy lifting and they’ve done exactly that. So if serviceable is enough for you, enjoy. I personally look for more, especially from this type of acclaimed pedigree. Add the reality that Matt Dillon‘s straight man FBI Agent and Peter Serafinowicz‘s ex-son-in-law are whipping boys, Lloyd’s not-all-there old-timer the butt of gags even his eccentric physicality can’t conjure laughs from, and Ortiz’s Jésus an intentionally misleading afterthought and Going in Style leaves a lot on the table when gazing beyond surfaces. There are no surprises, for better or worse. For me the highlights are Ann-Margret’s blatant flirting and Siobhan Fallon Hogan‘s quirkily no-nonsense waitress. Thompson’s shtick is funny and Pais is delightfully irredeemable, but they’re both disposable. The women are the consistent pieces that even evolve somewhat while the rest serve their purpose and disappear (save Serafinowicz, although his role is too clichéd and easily forgiven to truly praise). They’re the only two characters who really challenge our leads in any meaningful way too. Ann-Margret has Arkin’s number and isn’t afraid to prove it while Fallon Hogan turns the friendly yet barbed banter of a server and her “regulars” into someone we feel we know. They prop scenes up while the mechanics and inherent comedy of amateur crime simply excels on its own merits regardless of those involved.

As for the headliners: they do what they do best. Freeman has the dramatic role and therefore shines brighter by never being relegated to fool. Caine balances serious and light as he moves back and forth between family issues and his new career path into thievery. And Arkin pretty much sits back to deliver his cynically sarcastic retorts like we’d expect. None are performing brain surgery, but none phone it in either. They look like they’re having as much fun playing their parts as their characters do readying for the craziest day in their fictional lives. The hiccups they must overcome are as far from authentic as possible, but no one should be anticipating anything better. I didn’t love it or hate it, but I’ll definitely forget it.