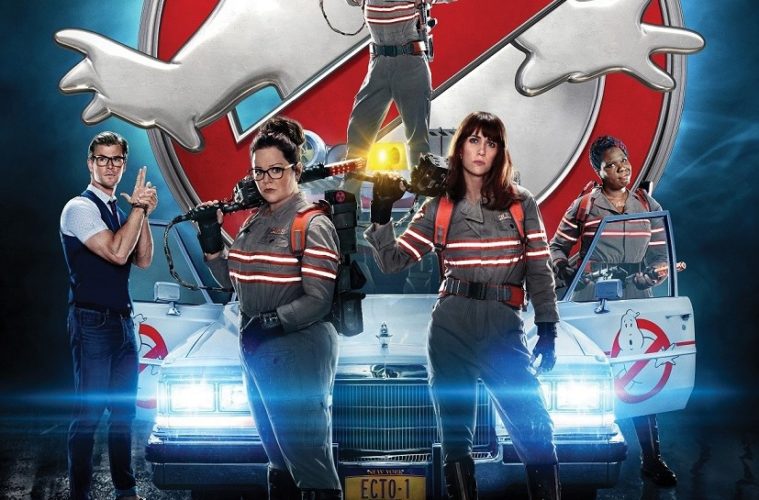 Having displayed comedic chops through his entire career and an eye for action in the last few features, Paul Feig was the ideal director to handle a new version of Ghostbusters. Teaming the actors who have most excelled when working with him (Kristen Wiig and Melissa McCarthy) while giving a spotlight to some deserving talent (Kate McKinnon and Leslie Jones), the right ingredients were in place to carry on the spirit of this franchise — or, let’s be honest: just the first film. While it doesn’t quite reach the height of laughter or thrills of Feig’s best work, Ghostbusters has a persistent dose of rollicking, scrappy fun that the ideal summer blockbuster should contain — all the way past the last credits.

Many years ago, Erin Gilbert (Wiig) and Abby Yates (McCarthy) co-authored a book about paranormal activity, but their friendship became fractured as the former entered academia and the latter continued down her path of trying to find something strange in the neighborhood. In the present day, Erin is surprised to find her book resurfacing on Amazon, its unfounded claims hindering her chances to get tenure at Columbia University. She seeks out Abby, who is now working with engineer Jillian Holtzmann (McKinnon) in a bid to get the book wiped from the Internet. Of course, this leads to her eventually getting roped into their ghost hunt, becoming fully committed when their conjectures become a reality, i.e. a ghost appears and projectile-slime-vomits into “every crack” of Erin’s body.

Familiar faces of every variety show up, callback jokes aplenty compound, jobs are lost in the pursuit of paranormal investigation, the mayor gets involved, a paranormal threat looms over New York City, etc. Yet even when falling into an unchallenging mold, akin to The Force Awakens in following a structure that recalls its original predecessor, it is the new elements that help Ghostbusters work as well as it does, particularly due to a pair of new cast members.

McKinnon’s Jillian — in a role that might have gone to co-star Wiig earlier in her career — steals the show with wide-eyed giddiness and perfect comedic timing. Whether it’s an impromptu dance routine to DeBarge’s “Rhythm of the Night” or unwittingly putting her fellow Ghostbusters in dangerous situations, an entire viewing of the film could be dedicated solely to watching McKinnon’s fun-loving reactions to the events taking place. The combination of her goggles, hair-do, and general costume will also be a hallmark for countless Halloweens to come.

The other stand-out, and perhaps the only actor in which every joke lands, is not part of the main quartet: Chris Hemsworth as Kevin, the impossibly sexy, useless secretary who is so dimwitted he covers his eyes to plug his ears and spouts out “existential” lines such as, “Have you ever realized an aquarium is just a submarine for fish?” Hemsworth — who stretched his funny bone in last year’s ill-considered Vacation and as Thor (when scripted by Joss Whedon) — is the lovable comedic punching bag whenever he’s onscreen, and, along with McKinnon, reaches the absurdist heights that Ghostbusters otherwise falls short of.

For dramatic table dressing, Wiig’s character revisits her past as a lonely child haunted by a ghost, which spurred her relationship with McCarthy’s Abby. It’s an effective moment and helps provide some substance — which unfortunately isn’t extended to Jones’ Patty Tolan, who joins up later in the game in yet another nod to the original. She has the right amount of energy, but her jokes often fall flat. (Ten years later, Oprah car giveaway puns work about as well as they do on a Kanye West album.) Meanwhile, Neil Casey‘s Rowan is about as blandly uninteresting as a villain can get, at least until he transforms.

With a brightly colored palette thanks to Robert D. Yeoman (the go-to cinematographer for both Feig and Wes Anderson), Ghostbusters opts for more of a candy-colored sheen than László Kovács’ grimy feel from 1984. While making things pleasant enough, this results in a lack of tangibility, particularly in the go-for-broke muddledness of the finale — save for an entertaining action beat featuring McKinnon.

Even if all the comedy and action doesn’t land, there’s enough charm to be had with the main cast. Feig and co-writer Katie Dippold even manage to get in a few compulsory jabs at YouTube trolls along the way, but perhaps the biggest triumph of all is that they’ve introduced a team one would actually like to see continue answering the ghost-busting call. This new version of Ghostbusters will rarely make one bowl over with laughter, but, like the first film, it has a consistent amount of lighthearted, amiable fun.