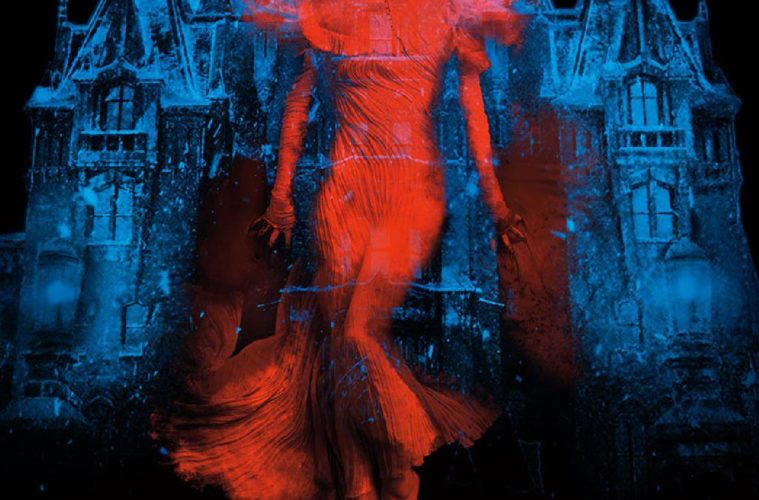 Crimson Peak works as many things: a melodramatic romance; both the recreation of a period and a revival of the way movies have made us perceive it; a genre-jumping comedy; and a critique of capitalistic excess. It does these things earnestly and without compromise, and it’s far braver — far more admirable — for having done so. What Guillermo del Toro’s new film doesn’t work as: a haunted-house picture. Although the director will personally tell you it’s not meant to fit this mold, the genre’s shape and intended impacts are certainly identifiable enough to spring to mind. The extent to which it fails here is rather clear, and the entire endeavor is sadly hobbled as a result. Maybe this film is just too brief. It’s admirable that a director of del Toro’s clout would assemble a talented ensemble and team of skilled technicians for the purpose of making something so defiantly open-and-shut — even more so when he still takes advantage of a decent budget to build convincing worlds in and out of the scary mansion on a hill. This is acceptable for a while, as so often happens when something is a constant pleasure to simply stare at. It’s also a bit smarter than simply looking nice: understanding the perceptions we have of our cinematic past(s), he and cinematographer Dan Laustsen have constructed two facile worlds. First is the golden-toned domesticity and industry of Buffalo, New York — the world’s electrical capital in this film’s year of 1901 — from which Crimson Peak’s ambitious protagonist, Edith Cushing (Mia Wasikowska), finds an escape via Sir Thomas Sharpe (Tom Hiddleston), a romantic Englishman who doesn’t meet her father’s (Jim Beaver) approval. After said father is horrifically bludgeoned to death, however, they can be joined in matrimony — but not without relocating to Sharpe’s English castle and living with his distant, black-donning sister, Lady Lucille (Jessica Chastain).

It’s all so silly and portent-filled that the signifiers are practically leaking from the screen’s sides, and is is in no way a negative reflection on del Toro and Matthew Robbins’ screenplay. The second world is that English mansion, the dark-tinted palette and winding architecture of which plays like as much a representation of how we, the audience, expect a haunted house to look and feel as it is a direct homage to classic horror. A sole, black home in a gray countryside, it has blood-red clay oozing from the grounds as soon as one arrives, and it’s so present in the climate that it’ll shoot from the water pipes as soon as you turn them on. Hiddleston tells us this and the home’s incessant creaking with a straight face and dashing tone — “The east wind,” he says almost wistfully — and, even with supernatural elements being its bedrock, the movie does little to refute his approach to this situation. It would make Mel Brooks smile.

Those elements are where the film begins turning into a curious failure. Since childhood, Edith has been haunted by a spirit that’s warned her of a “Crimson Peak,” which, needless to say, is a source of concern when it turns Thomas’ home is called… Crimson Peak! A CG ghost begins appearing, warning her of dire consequences for stupid behavior. The mystery of what, exactly, is being referred to will prove only a bit more interesting than the thrills del Toro is trying to communicate. The specifics of where he fails is a bit unclear, which might end up speaking to a uniformly bland quality of these sequences. More than being too self-contained and telegraphed (e.g. what could be behind the creaking door that’s slowly opening?), they’re most defined by an effect that’s never convincing or, for that matter, conniving enough to communicate a sense of danger.

Then again, Crimson Peak is generally marked by slipshod shooting-editing strategies, with enough too-short shots and unnecessary cuts to make me wish some, any deliberately measured film could be put in front of del Toro and editor Bernat Vilaplana. There’s the sense that design and mood came before shot selection; for as much as it has those two things in spades, the third ingredient is — and I don’t think this is a demanding or unfair assumption — what ties them together. (A glance between Hiddleston’s Thomas and Beaver’s patriarchal figure would thrum with so much more meaning if our eyes weren’t darting to keep track of who is where because the shots keep shuffling around.) True to the weird balance of being better as a melodramatic romance, the finest sequence is early, back in Buffalo: a dance sequence that pivots on the dancing partners not allowing a candle to extinguish. Wisely, del Toro frames this sequence in long, dancing shots that join with Wasikowska and Hiddleston without losing sight of the other expressions driving this drama, allowing the same telegraphed quality to be more natural a part of its visual fabric.

This can be tolerated for most of Peak’s runtime, given the simple fun that comes with Lady Lucille devilishly tormenting the naïve Edith and a nebbish Thomas attempting to assert himself. (Credit is also due to Charlie Hunnam, a Buffalo doctor whose attempts to win Edith’s affections pay off when he has a reason to cross the Atlantic for her.) And then it climaxes with a disappointingly action-driven knife fight — which, fine, is not something we see enough of in mainstream cinema — that thrives on gore effects first, character drama second.

By film’s end, Crimson Peak is fascinating for the myriad ways it veers right and wrong, and it speaks to the stronger passages that their weaker brethren can be overlooked within reason. Yet there’s a better movie resting somewhere inside here — one that evinces as much affection for its mood as it does its tone, as much interest in its drama as the possibilities of what symbols might instill in its viewers. For Halloween-season fare, this is a step above the typical offering. But we should demand better.

Crimson Peak will open in wide release on Friday, October 16.