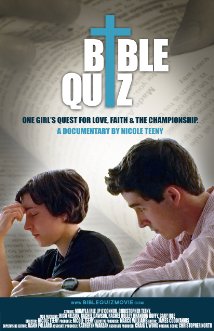 Pitted against each other in teams, Christian teenagers compete in a grueling face-off of Bible trivia, answering complex scores of questions with the rapid-fire delivery of an auctioneer. Basically an evangelical version of youth trivia shows like It’s Academic, the titular event of Nicole Teeny’s new documentary doesn’t exactly suggest the high-stakes of The Hunger Games. In fact, at first glance Bible Quiz looks to be a wholly dull affair since the game itself is a basically harmless tradition without any of the twisted undercurrents that made Christian-themed docs like Hell House or Jesus Camp compelling to those outside the faith. It is a pleasant surprise to learn that Teeny, who knows this environment, its challenges and its joys, has made one of the most entertaining and endearing documentaries to come around this year.

The reason Bible Quiz works is because the game itself is not the film’s subject, nor is the culture that birthed it the focus. Refreshingly, Teeny avoids emphasizing or critiquing the world she enters here, and succeeds by choosing one student in particular to serve as our eyes and our ears into this microcosm. Seventeen year old Mikayla, a spunky, self-aware girl whose small frame and mousy brown hair incorrectly suggest a slight presence, is the film’s real center. While many of the kids participating in the bible quiz challenge have obviously been spurred there by Christian parents, Mikayla is essentially on her own; she’s got an alcoholic mother who’s left the family and a father who is mostly disinterested with this particular hobby. Instead of making the young girl an underdog who sets out to validate her faith, the film is really about her coming of age, an awkward and yearning love story as she strives to do all that she does—not for her family, church or for God—but to nab the attention of her fellow teammate, the dreamy (and somewhat clueless) J.T. Still, Bible Quiz isn’t a secularist attempt to debunk the faith of these kids, their hard work and ambition, or to cast aspersions on Mikayla, who is mostly using the Bible Quiz team as a surrogate family. Teeny avoids any commentary on what’s happening, instead treating the quiz culture itself as commonplace as any other teenage experience, the result being that anyone can relate to the feelings and emotions that are drudged up along the way. Growing up has many facets, and one of those is learning to be comfortable in your own skin, which comprises much of Mikayla’s growth through the feature. Give Teeny some real credit here, because she doesn’t shy away from the fact that the cameras and surveillance are having a maturing effect on this girl and her emotions.

The film unabashedly delves into Mikayla’s budding awareness of how she feels about JT, what she really values in this team, and her growing understanding of her own faith and values. A scene where she watches some of the other girls debate religion with a possibly homeless, atheist street busker is handled with real delicacy; everyone involved has good intentions, but she sees more and the camera lingers on the crumpled dollar she’s left in his guitar case as her voiceover gives her own thoughts on being evangelistic. When Mikayla tells one of her teammates that she doesn’t understand why people want to drink, the girl responds with the expected religious jargon. Once she’s read the climate in her friend’s answer, her tactic is to retreat, recalling some of the verses about drunkenness she’s memorized for the competition, using them to blend back into the surroundings. But we have already seen Mikayla visiting her mother’s home and questioning the alcoholism that tore apart her family and as an audience we know her initial statement comes from a place other than devout disdain.

Bible Quiz uses the setting and the competitions themselves to build a sense of how all these people relate with one another. The quizzing scenes can only be so interesting; some of these kids are so breathlessly rattling off the answers we are lucky to even grasp the topic, let alone the context. As such, all of the tension and nervous energy is conveyed through talking heads that feel so unforced and authentic that they disarm us with how naïve and goofy some of the players are once out of their comfort zone. Bemusement is the order of the day, not scorn; one of the funnier segments involves a chipper young girl explaining that ‘lipginity’ merely means that she’s abstained from kissing so far. The air of sexual suspicion that hangs over every scene adds to the awkwardness that characterizes Mikayla’s friendship with J.T. After a stunning victory they accidentally hug, and their dizzy reactions add another layer of likable charm to the story. J.T., Chris and the other players are basically good kids who treat the quizzing exactly like any other competitive sports event, but are aware enough to know the irony of fretting more over winning than experiencing spiritual growth. That Mikayla feels legitimately loved and accepted is also to their credit, and it’s nice to see how positive the experience is for her. She’s a smart kid, still striving to understand what she believes even when she knows she is a little bit apart from her fellow team members.

As a film, Bible Quiz is a legitimate triumph, not least because it takes the time to get into the skin of the people it’s observing. Everything we come to learn about bible quizzes, the teams, and the nature of the competitions is conveyed through those young kids who are fiercely committed to this. The result is not a treatise on faith or indoctrination, or even a sports drama with teamwork winning out. At the end of the day, Bible Quiz tells the best possible story it could tell, that of a young woman coming to terms with her own growing-up, as heartfelt and uncertain and as honest as it can be.

Bible Quiz premiered at Slamdance Film Festival, where it was awarded the Best Feature Documentary prize, and screens tonight at the Newport Beach Film Festival.