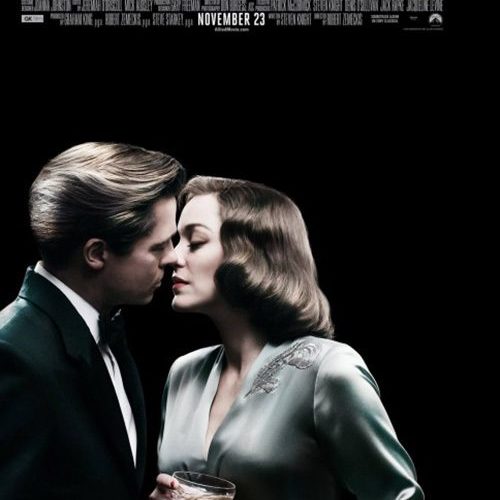 Allied is not a subtle film, clear from the minute its title dissolves away, letting the word “LIE” linger just long enough for you to audibly laugh. However, if you’re turning to Robert Zemeckis for subtlety you’ve made a horrible error. The film is a sweeping, glossy tryst between Casablanca and Mr. & Mrs. Smith. Though not as eminently delightful as the former (though just as glamorous), but as reliably digestible as the latter, it serves to engross and satisfy, achieving both without breaking a sweat.

Against a very faux, but beautiful backdrop of North Africa in 1942, the film places Brad Pitt’s Max Vatan and Marion Cotillard’s Marianne Beauséjour in the heart of Casablanca, girding themselves for a likely suicide mission. Their chemistry is immediately palpable, and with tension mounting, the two fall in love against their best instincts in tradecraft. Here, Steven Knight’s tightly wrought screenplay begins to move with a refreshing expediency. It never confuses an epic scale with an overlong runtime, as period romances are wont to do. As Max begins to suspect Marianne of being a Nazi spy, the film continues its impressive clip with nary a lull. The pace is a direct result of Zemeckis’ handywork with several deftly maneuvered sequences. Tit-for-tat meetings with Nazi officers (August Diehl, seemingly popping right out of Inglourious Basterds), embassy shootouts, this year’s most anxiety-inducing bedside clock, and more all lay the groundwork for a nail-biter in the purest sense.

The moments in between rest heavy on Pitt and Cotillard, who are more than up to the task, though Jared Harris never serves to disappoint, in a supporting performance that’s somewhere between Claude Raines and Alec Guinness. Lizzy Caplan as Max’s sprightly sister serves the film’s only real casualty, relegated to a sideline role that fails to make any use of her best attributes as an actress. They are characters nonetheless, and play as such. Our two leads, however, do not. Their performances are wonderful, no doubt, but don’t feel like they necessarily belong to this film. In a world covered in the sheen of digital antiquity, the way Max and Marianne choose to look or not look at one another speaks volumes, granting a bit more nuance than a film where two people make love in computer-generated sandstorm might allow. About that sandstorm: The director still hasn’t entirely shuffled loose the coil of his motion capture works from the early aughts, apparent in a number of the film’s more grandiose vistas. He’s always had an affinity for visual flourishes, and while his foray into animation felt like experimentation or whimsy, the best possible results of it feel on display in his recent work: Flight’s spectacular plane crash, The Walk’s dizzying climax, and now this sweeping sandstorm. Again, no accounting for subtlety, but that’s not why Zemeckis is worth celebrating. The artificiality adds a lightness to the film rather than plasticity. There are moments on hand here that feel playful but at home, allowing a respite from anything too overtly grave or severe. Invoking every WWII-era thriller from Notorious to Phoenix, Zemeckis adds an undeniable charm to the proceedings — a sense of comfort or even saccharine warmth.

There’s no particularly brilliant conceit on display, nor unnecessary reinvention of the wheel. It makes no bones about its roots, but peacocks them accordingly. Entertainment of the highest order, Allied, like a large portion of Robert Zemeckis’ work, feels like a grand ode to filmmaking of an era past.