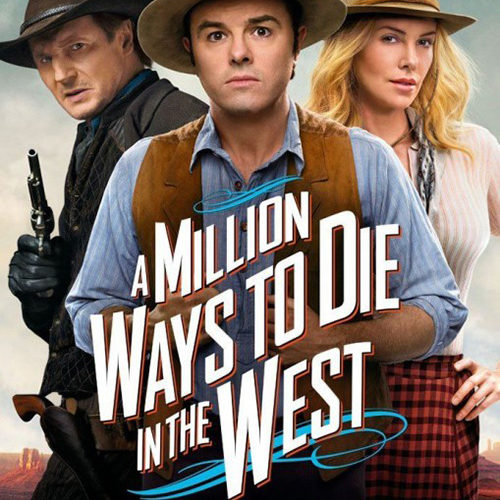 [Review] A Million Ways to Die in the West

I do believe congratulations are in store for one Mr. Seth MacFarlane. After a successful animated comedy that survived cancellation, two follow-ups that never quite caught on with equal cheer, a bit part in the ill-fated Flash Forward as an actor, a ho-hum, neutered stint as Oscar host, and a hilarious first feature that hinted at infinite promise for what his cinematic future held, Seth’s time has officially come. I’m not talking about acquiring the fame to release albums of him crooning nor the recognition to cash-in by writing a novelization of his own script—those are simply perks of the newfound Hollywood fame I am honestly glad he’s cultivated. No, I’m currently standing in applause today because he achieved many men’s fantasy: to make out with Charlize Theron and get paid while doing it.

That was A Million Ways to Die in the West‘s goal, right? It definitely wasn’t to make me laugh. I wish Theron was still married to Stuart Townsend so I could jest about him having to “watch out” only so I could then explain their union (and the joke) to readers who did or didn’t know because that’s exactly what MacFarlane does. He thinks he’s winking—making bad jokes to subvert their precise calculation with awkward explanations he hopes conjure actual laughs—but it comes across as a plea of desperation. Nothing said has substance, whether his “I’m being racist to turn the mirror on racists while also making money from racism” shtick or lengthy diatribes about the West from a twenty-first century man’s viewpoint — it’s all white noise lulling us to sleep.

Thankfully his inexperience as a director—or perhaps an intentional maneuver proving a genius beyond comprehension—allows the first two night scenes to jarringly transition into desert landscapes smoldering under a blazing sun to truly mess with my pupils and ensure I’m awake for the next sequence of over-sharing, poop jokes, blatant misogyny, and physical humor with sound effects so staged that the sound guy better have earned a comparable salary to Liam Neeson. Yes, MacFarlane and writing partners Alec Sulkin and Wellesley Wild render their good work on Ted moot by providing the type of comedy you’d find in a PG-rated family film for pre-pubescent children. Sadly, however, the horrific truth reveals this script to be perfectly suited for the co-ed/aging adult mix at my screening that ate every lazy gag up like Thanksgiving dinner. What worked so well with Ted and in turn what makes Family Guy‘s longevity possible is an unchecked embracement of the absurd. Talking dog? Villainous baby? Conscious manchild teddy bear? They do the trick because MacFarlane forces us to suspend disbelief and go with the flow. It might be because we’re laughing too hard to let our brains catch up, but it’s effective. For whatever reason, A Million Ways to Die in the West tries to exist in some semblance of reality with love, conflict, and heroism in a world unfamiliar to today’s youth. But rather than mock the western genre, the screenwriters have modernized it with catchphrases and celebrity cameos that prove more puzzling than effective. Only MacFarlane’s attempt to one-up his Flash Gordon pop culture reference from Ted can be labeled an exception that proves the rule.

Besides that inspired homage, though, the number of times I chuckled can be counted on one hand. Maybe I’m in the minority; perhaps I’m missing the “joke.” Maybe hearing Sarah Silverman‘s prostitute Ruth weigh the chasteness of foregoing premarital sex with boyfriend Edward (Giovanni Ribisi) against the ten to twenty men she lets violate her daily in trademarked squeaky voice for the umpteenth time is truly funny. Perhaps I’m too stiff to see the merit of the line, “Don’t drink and horse,” when MacFarlane’s Albert gets wasted and attempts to ride home.

There’s a plot in here somewhere concerning Albert’s desire to win back the affection of his ex-girlfriend Louise (Amanda Seyfried) by showing his latent machismo through a hasty duel challenging her new beau Foy (Neil Patrick Harris), but I honestly never cared. Louise and Foy are horribly vapid souls who laugh at their own jokes—albeit so does everyone else onscreen—and Albert’s new “friend” Anna (Theron) is never disguised as anyone but the woman who should love him as an equal despite already being married to the quickest draw in the West, Clinch Leatherwood (Neeson). They simply go through the motions of the plot, tell their jokes with knowing looks or their own laughter, and continue in not quite over-the-top enough performances that lead to cheap guffaws as forced as the stunts causing them.

I think MacFarlane is one of the brightest comedic voices out there and, quite honestly, he let me down. I’m sure he had good intentions with a satirical concept that could soar if handled correctly, but he let contrivances and toilet humor usurp any bite his mind might have believed he injected. It’s bad when you think you’re watching the climactic battle between hero and villain only to see it dissolve as quickly as it began because we still needed twenty minutes of offensive gags concerning Native Americans, midgets, Arabs, and Jews after already enduring the lambasting of Asians and Blacks. MacFarlane and company replace wit with juvenility (swearing, gore, and animal penises) and I pray they right the ship before Ted 2. With optimism waning, I might not care by then.

A Million Ways to Die in the West opens Friday, May 30th.