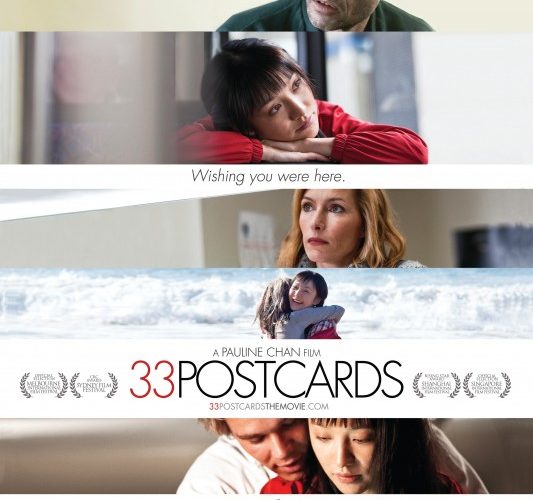 A culturally significant film marking the first official cinematic co-production between Australia and China, Pauline Chan‘s 33 Postcards also provides a moving tale about what it means to care for somebody. Selected to partake in the Tribeca Film Institute program as a screenplay in 2009, its future has always been bright from inception straight through its numerous festival screenings these past three years. A promising start for what’s potentially a lucrative financial partnership, Chan’s access to both countries adds a level of authenticity that would have been sorely lacking otherwise. And while its necessity to use subtitles so every second can be drenched in its theme of overcoming borders and seeing past mankind’s failings may deter mainstream American audiences, it simply proves how close-minded our supposedly modern nation has become. Unafraid to tug at your heartstrings, Chan’s script—co-written with Philip Dalkin and Martin Edmond—is a perfect example of deceiving appearances. 33 Postcard‘s lead character Mei Mei (Zhu Lin) is an orphan with nothing until a generous sponsorship arrives at a very young age. Allowed to attend school, learn English, and sing with a choir that travels the world, her lack of parents and name (Mei Mei translates as “Little Sister”) becomes endurable because of Dean Randall (Guy Pearce). His words are what keep her warm at night and hopeful for a future she would never have had without him. Knowing he, his wife, and kids were out there in their Australian beachfront home gave her reason to strive for more and one-day visit the closest thing she’s ever had to family.

But when the opportunity presents itself in the form of an Australian tour, reality ends up being drastically different than the visions conjured through a decade of correspondence. Overly trusting and naïve, Mei Mei roams Sydney in search of her hero and finds cold dispositions, rough neighborhoods, and little assistance. The address she was given provides Dean’s brother Gary (Rhys Muldoon), a man quietly dismissive when asked where he might be found. Only the boy on a motorbike (Lincoln Lewis‘ Carl) squeezing Gary for money is willing to take her to see him and solely due to the lustful prospect of her holding him tight during the ride. It’s when they reach their destination that the severity of Dean’s situation is revealed and the path towards Mei Mei’s potential destruction begins. While she’s off trying to find her Mr. Randall, the choir she’s conducting must fulfill their engagements. It therefore falls to the orphanage’s Miss Chen (Elaine Jin) to ensure Mei Mei’s safety. Staying behind to keep in contact with a police force that won’t declare her missing until 48-hours lapse, we realize how powerful her compassion is for those in her care. This begins what turns into a heartfelt circle of love overcoming its barriers to show we’re never alone. As Dean’s lies kept Mei Mei protected across the Pacific, her success gave him solace for deeds he cannot forgive himself for committing. And as Miss Chen drops everything to find the girl she helped raise these past ten years, Mei Mei finally understands her luck hasn’t all been bad.

Add in Carl’s desire to get out from under his car thief father’s (Terry Serio) thumb along with Dean’s lawyer’s (Claudia Karvan) own parental problems with a divorced husband and estranged daughter and you have plenty of examples depicting disappointment and loss. But somehow this stranger from China arrives to give everyone pause through her strength and courage to never give up on those important to her happiness. It’s a culture clash of sorts as she becomes involved with a shady bunch that for the most part subvert expectations by being kinder than one would imagine, but such good fortune can’t last forever. Sacrifices must be made and the bonds we create must stand for something more than selfish gain. Family—in all its forms—finds a way to prevail. Chan and company’s plot progresses towards a darkly authentic climax before making its way towards happier tidings, but I guess that’s just par for the course. While disappointing my abnormal thirst for depressive outcome, its sense of redemption and salvation is key to the message at hand. And above any shortcomings its characters’ fateful collisions of good and bad intentions may provide are the excellent performances leading the way. Lin is truly a girl out of her element that learned English during production and found an effective balance of innocence and stubbornness for the part while Pearce breaks your heart struggling to survive when all hope appeared gone. We all strive in life to find the emotional bond they’ve forged miles away and their selfless desire to sustain it proves a worthwhile journey as a result.

33 Postcards opens in limited release on Friday, May 17th.