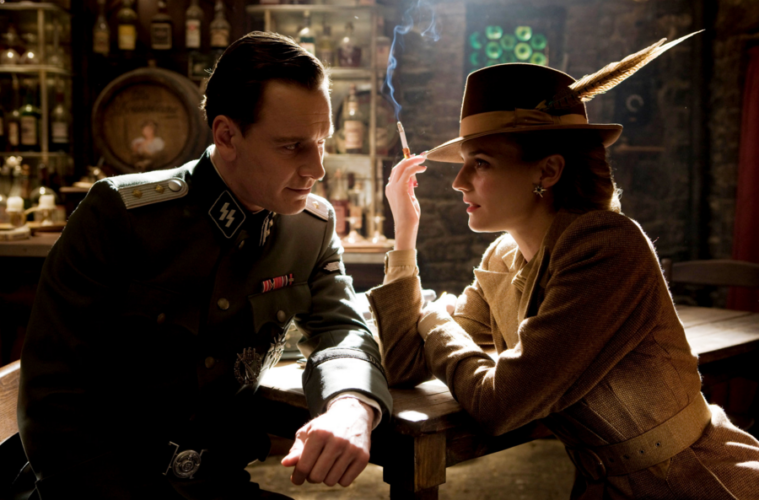 The Hateful Eight, the highly anticipated (and excellent) new film by Quentin Tarantino, begins its limited 70mm roadshow release this week. To mark the occasion, we decided to look back through Tarantino’s explosive filmography for some of our favorite scenes.

Amongst the bullets, pitch-perfect dialogue, and close-ups of Uma Thurman’s feet, we’ve found ten scenes that range from hilarious to downright scary. It’s a testament to Tarantino’s command of cinematic tone, the ability to navigate effortlessly between scenes of starkly differing styles and techniques. While one can endlessly argue over this topic, we believe these are the foundations of what makes Tarantino, well, strictly Tarantino.

Enjoy the list below, including clips where available, and suggest your own favorites in the comments.

It’s the oft-quoted scene that first established Tarantino as a master of dialogue, drawing attention from critics for his unique, pop-culture-infused conversation. Fittingly, the first voice heard in a Tarantino movie is his own, extorting some amusingly crude philosophies on Madonna’s “Like a Virgin.” The scene is also a classic for how it builds to Mr. Pink (Steve Buscemi) and his anti-tipping tirade, which draws the shocked outrage of every murderous criminal at the table. We’re even treated to some stellar back-and-forth with Laurence Tierney and Harvey Keitel, playfully bickering over an old address book, which prompts the immortal line from Keitel: “If you shoot me in a dream, you better wake up and apologize.”

For a sequence opening with a title card that reads “Vincent Vega and Marcellus Wallace’s Wife,” the scene oddly enough has nothing to do with either of the aforementioned characters. Instead, we meet Butch (Bruce Willis) as an off-camera Wallace doles out some of the finest dialogue of Tarantino’s career over the smooth sounds of Al Green’s “Let’s Stay Together.” Wallace wants Butch, a low ranking boxer to throw his upcoming fight in exchange for a envelope of cash. The Pride speech feels thematically linked to another given later in the film, like two sides of the same coin. In the first shot, Willis stares silently at the camera as his proposed fate is dictated to him. In the second, Christopher Walken muses directly to the audience about an all-important gold watch, while young Butch remains helpless and off-camera. Throughout his bruised life, Butch is forced to passively listen as his world is elucidated by those more powerful than himself. Little do they know that Butch’s ass isn’t going down in the fifth.

After Dinner with Candie and Schultz (Django Unchained)

After the deal for Broomhilda’s freedom is agreed upon, Schultz (Christoph Waltz) sits in Candie Land’s drawing room, listening to Beethoven emitted from a nearby harp. Schultz’s mind is on D’Artagnan, the poor slave he saw torn to shreds by dogs that afternoon. Candie (Leonardo DiCaprio) did not choose the label D’Artagnan thoughtlessly, naming his slave after the lead character from Alexandre Dumas’ The Three Musketeers. As Candie eats a slice of white cake (what a great, not-so-subtle detail), Schultz asks what he thinks Dumas would have thought of what happened to poor D’Artagnan. Candie admits, egg on his face for the first time, that Dumas likely would not have approved, describing the author as “a soft-hearted Frenchie.” At which point, Schultz replies: “Alexandre Dumas is black.” Touché, Mr. Schultz.

Death Proof, Tarantino’s half of Grindhouse, was critically maligned at the time of its release. If it feels like the slightest film in his catalog, it’s not surprising. The conceptualized nature of this project forced the filmmaker’s hand, filtering his chatty cinematic sensibility through the required tropes of the genre. Has age ripened this exploitation homage? Hard to say. Tarantino’s inimitable voice breaks through when Kurt Russell’s Stuntman Mike provokes the lovely Butterfly (Vanessa Ferlito) for the lap dance advertised on Jungle Julia’s radio show. He recites the poem immaculately, but Butterfly shuts him down. As a last-ditch effort, Stuntman Mike produces a book, in which he lists everyone he’s ever met. Unfortunately for Butterfly, due to her reluctance to dance, he will be forced to list her in the book as a chicken-shit. She bites, taking the challenge and the lap dance that follows is one of the most lively and fun scenes in all of Tarantino’s films. Stuntman Mike’s challenge is indeed a clever little pick-up line, although it’s basically the same tactic that Biff Tannen uses to goad Marty to fight in Back to the Future: “What’s wrong, McFly? Chicken?!”

A casual discussion of Amsterdam hash bars abruptly turns to European fast food, where everything is just a little bit different as Vincent Vega (John Travolta) points out to his partner, Jules Pitt (Samuel L. Jackson). Famously, the conversation’s centerpiece is the term Royale with Cheese, a Parisian name for a McDonald’s Quarter Pounder with Cheese. The much-homaged, much-parodied dialogue exchange has become iconic, but why? It’s a thoroughly charming introduction to these epochal characters. Not everyone has experienced a hash bar, but we’ve all been to McDonald’s. They seem like normal guys on their way to work, shooting the breeze, save for the fact that they have loaded guns in the trunk of the car. It’s an inventive slice of dialogue, which builds to a delightful punchline. Jules ponders what a Whopper would be called in Paris. Vincent replies: “I don’t know. I didn’t go into Burger King.”

The now-iconic scene is a perfect introduction — not only to Col. Hans Landa, but to Christoph Waltz, whose career up to this point had been relegated to German television. It alone may have netted Waltz his first Academy Award. A French dairy farmer finds himself under interrogation from the exacting Landa, inquiring for the whereabouts of a Jewish family, who just so happen to be hiding beneath the very floorboards on which they stand. On the soundtrack, Ennio Morricone’s “L’incontro Con La Figlia,” a composition cribbed from Duccio Tessari’s The Return of Ringo, forebodingly wails, evoking a tone closer to a horror film than a war movie. It’s not long before Landa discovers the secret, ordering his foot soldiers to riddle the floor with machine gun bullets in an epic blast of blood and sawdust, a truly disturbing prologue to this spectacular film.

At the end of Beatrice Kiddo’s (Uma Thurman) kill list, we find the titular Bill (David Carradine). However, we do not receive the violent showdown many fanboys expected, as The Bride discovers that her daughter is alive, having been raised in this assassin’s hacienda. After the child falls asleep, Kiddo is shot with a dart containing “The Undisputed Truth,” a serum of Bill’s own concoction. As Bill waits for the drug to take effect, he muses on the subject of superheroes, citing his favorite to be Superman. An inspired and truly geeky example of how cleverly pop culture seeps into Tarantino’s dialogue. The metaphor of Superman disguising himself as humble Clark Kent is a stinging jab at Kiddo’s choice of a blue-collar, used-record-store-employee for a husband over Bill, the world’s deadliest assassin. With cold calculation, Bill explains his own reasons behind the act of violence that separated a mother from her child for nearly five years. As the man himself says: “There are consequences for breaking the heart of a murdering bastard.”

It’s a scene that Tarantino did not even direct, and yet would find its way to the top of any fan’s list, as it contains perhaps the finest moments of Dennis Hopper and Christopher Walken’s careers. I say perhaps because of films like Blue Velvet and The Deer Hunter, but the scene undoubtedly ranks closely with those masterful turns. After Clarence and Alabama hit the road to L.A., Cliff (Hopper) comes home to find Vincenzo Coccotti (Walken) and a crew of gangsters waiting for him. As Coccotti unravels the story of Clarence’s disposal of Drexel the Pimp (the equally unforgettable Gary Oldman) Cliff slowly realizes the depths of Clarence’s troubles. He knows these men will beat and torture Cliff until he gives up his only son. Cliff’s only option is to mouth off so offensively to these Sicilian mobsters that they kill him without another thought. And so Cliff begins a speech that will truly become the stuff of legend: “You know, I read a lot. Especially about things… about history.” The Sicilian scene is a towering achievement, which Tarantino himself describes on the DVD commentary track as “one of the proudest moments of my career.”

This is a bit of a cheat, as it’s actually two scenes. Oddly enough, both of which take place before Jackie Brown even meets bail bondsman Max Cherry (Robert Forster). Instead, we focus on Cherry and Ordell Robbie (Samuel L. Jackson), a flamboyant gunrunner with whom two of the bondsman’s clients are employed: Brown and Beaumont Livingston (Chris Tucker) a small-time criminal out on a $10,000 bond. At first, Ordell is only interested in Beaumont’s bond, which the gunrunner pays in cash. Later, after Ordell shoots Beaumont in the trunk of his car, he returns to the bail bondsman, looking to shift his ten grand over from Beaumont to Jackie Brown, who’s just been busted with cash and cocaine. Cherry is quietly shocked by all of this, and even more so when he learns of Beaumont’s death, which Ordell conveys with exuberant delight: “Somebody with a grudge blew Beaumont’s brains out. Oh, shit: that shit rhymes! ‘Blew Beaumont’s… brains out.'” As Ordell gleefully cackles at his morbid realization, Cherry looks on, unimpressed.

As Operation Kino slides into place, Lt. Hicox (Michael Fassbender) and the two German members of the Basterds find themselves in what they expect to be a Nazi-less basement tavern. They’re meeting their contact, movie-star-turned-British-agent Bridget von Hammersmark (Diane Kruger) who, as they arrive, stands up from a table of German soldiers. So much for a Nazi-less basement tavern. What’s great about the scene is how Tarantino refuses to let the supporting players become faceless extras, who can die without thought or care from the audience. Each person in the bar from the German enlisted soldiers to the French barkeep and his daughter have a small moment to shine before the bloody twist. And when that twist comes, it lands with devastating force. It may seem like just another Mexican stand-off in a Tarantino film, one of many. When watched in comparison with his first, the climatic shoot-out of Reservoir Dogs, the director’s vast artistic growth can be seen in the gruesome tavern scene’s brutal emotional impact.