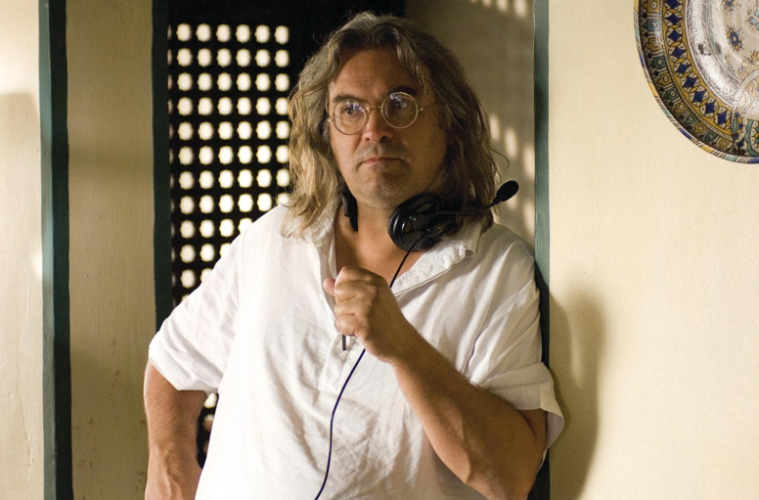 Not long after his own stagnated project was brought back to life, Paul Greengrass is looking to resurrect the abandoned work of Steven Spielberg. As Deadline tell us, the helmer — finishing up the Tom Hanks-led drama, Captain Phillips, for a fall release — is negotiating with DreamWorks to direct The Trial of the Chicago 7, which The Beard had been circling back in 2008. You likely remember this title for the involvement of scribe Aaron Sorkin and star Sacha Baron Cohen, the latter of whom was the only actor formally placed into a role (i.e. Abbie Hoffman) before fears of a SAG strike caused enough delays to see its director’s position vacated. (The efforts of Ben Stiller, also interested in tackling the material, were not sufficient enough to bring it all forward.)

But now it’s back to life, with the studio expecting to sign Greengrass in time to begin rolling cameras by January — a good step for the title, of course, though two of its key components — the screenplay and cast — remain unclear and / or unsettled. What we have, first, is the affect of enough drafts having been worked through by both Spielberg and Stiller, on separate occasions, that, to this end, what draft is put in everyone’s hands might be up for debate; the second simply hasn’t been tackled because DreamWorks are in early days of figuring out everyone’s schedule. Much is to be sorted out, too: a line of eight (later, seven) men charged with inciting to riot at the fiery 1968 Democratic National Convention in Chicago, the trial soon turned into a circus by the expressive defendants. How do you find a right team of performers when each piece is so significant?

While it’s ground that had been well-covered in the excellent live-action / animated hybrid documentary Chicago 10, combining Greengrass’ penchant for verisimilitude with Sorkin‘s sharp, loquacious verbal sparring is something yours truly would consider worth seeking. (So long as the writer’s whole women thing — not a huge problem before, now on full display in The Newsroom — is dialed down by about 12 degrees.) With the ingredients present, a winner might be on their hands.

How do you feel about Greengrass and Sorkin telling the Chicago 7 story?