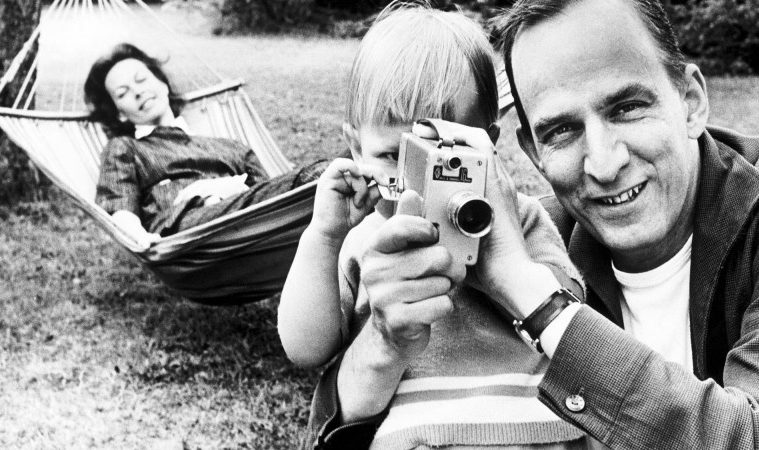 In the year of the Swedish master’s 100th birthday, Margarethe Von Trotta wraps a belated, posthumous gift with her Searching for Ingmar Bergman, a portrait of the artist as seen and experienced by a handful of acolytes and former collaborators, who conjure up a communal memoir so affectionate and heartfelt that by the time Searching clocks its 99 minutes, the feeling is to be leaving a dinner table where people have gathered to mourn a longtime friend-cum-mentor.

This collaborative dimension is possibly Searching’s strongest asset: while Von Trotta serves as the chief chaperon, opening Searching with a shot of the beach where Bergman filmed the opening sequence of The Seventh Seal to take off for an international, pan-European journey into the director’s life, the trip (and the image of Bergman that billows to life along the way) is very much a communal experience. Having accounted for her own artistic liaison with Bergman (who adored her 1981 The German Sisters, and included it in a top ten of his favorite films), Von Trotta sits and chats with legendary collaborators and younger disciples, (from the likes of Liv Ullman to Olivier Assayas, from Carlos Saura to Mia Hansen-Løve, Robert Östlund and Jean-Claude Carrière) as well as family (Bergman’s sons and grandson).

It’s a game of talking heads that never grows boring, and constantly seesaws between footage of Bergman’s canon and archival interviews – of which there are plenty. Assayas and Carrière do their fair bit of lecturing, tracing a genealogy of Bergman’s oeuvre and his influence upon European auteurs that blends academic analysis with personal anecdotes (Assayas’ musings in particular are so lucid and affectionate one could listen to them ad infinitum), and there’s an exquisite and instantly relatable sense of awe in Hansen-Løve’s account of her time readying Bergman Island in the director’s last retreat, Fårö. But it is in the accounts of Bergman’s actresses (Ullmann and Saraband’s Julia Dufvenius above all others) that Searching crafts what is arguably the most interesting portrait of Bergman’s, a man whose regular collaborators often felt like they served as extensions of his own persona (pun intended), or in the piercing words of Dufvenius, “instruments subject to his will.”

The portrait gets somewhat darker when Von Trotta turns her focus to family members, and there is an aching matter-of-fact insouciance in Bergman’s son Daniel when he states: “[Bergman] was always closer to his own childhood than his own children” – a claim that predates a bilious recollection of a father-son argument turned into a fight. Arguing that Searching glosses over Bergman’s mixed record as father and husband would be unfair – another chilling quote by Daniel, “he impregnated women to control them,” speaks for itself – but Von Trotta does not (unlike perhaps the other Bergman doc of the year, Jane Magnusson’s Bergman: A Year in a Life) make those the centerpiece of a scandalous clickbait take on Bergman’s proclivities – but adds them to further problematize her subject, steering clear for a hagiography tout-court.

We hear of Bergman the workaholic, the man who would show up on set 30 minutes before everyone else, required actors to rehearse their scripts for 3 weeks, yet would “never think he was good enough.” And we listen to people recount his linguistic struggles as an expat in Munich – Bergman, a polyglot fluent in French, English and German, who still found it impossible to feel as free in a foreign language as he was with his own, and spent his self-imposed German exile in perpetual lost-in-translation state.

For a movie centered on an artist who came to define the second half of the twentieth century (perhaps the European Auteur par excellence) it’s refreshing to see Von Trotta flashing out Bergman’s eagerness to play with new media – most notably via his digital experiments in 2003’s Saraband. But it is somewhat frustrating to hear little about his legacy among younger cineastes. Aside from an early claim by Östlund (“the strongest moving images of the past 15 years are all on YouTube”), and a meta rupture during his chat with Von Trotta (the Swede suddenly getting so interested in the conversation he starts to film his interviewer with an iPhone), there is very little sense of how Bergman’s work may have been assimilated by new generations – and what – if anything – his canon may mean to today’s audiences.

Those who will turn to Searching hoping to find a rigorous exegesis of Bergman’s work are likely to come out of it disappointed: interwoven in Von Trotta’s European peregrinations, the Swede’s filmography is a jumbled as the journey. But I suspect a detailed, film-by-film exploration of Bergman’s canon was never Von Troppa’s first concern. Searching for Ingmar Bergman does not purport to be a textbook-style, didactic analysis of Bergman’s oeuvre; it’s a communal tribute, a charming letter written by artists the Swede continues to influence, and imbued with a charming, moving sense of gratitude.

Searching for Ingmar Bergman played at the 56th New York Film Festival and opens on November 2.