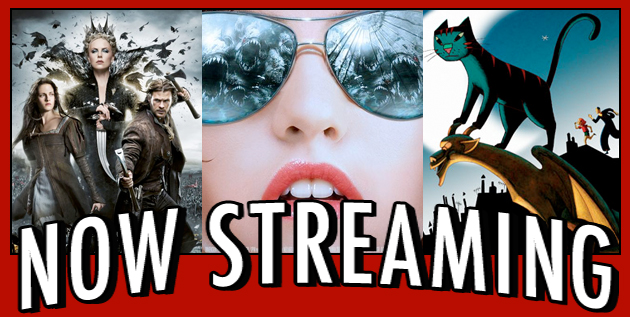 [Now Streaming] Your ‘Snow White and the Huntsman,’ ‘Piranha 3DD’ and ‘Cat in Paris’ Alternatives [Editor’s Note: This will be the final Now Streaming column as creator Kristy Puchko is moving on to other opportunities. We wish her the best and have decided to discontinue this weekly feature since her skills here can’t be matched! For more streaming recommendations we encourage you to check out Instant Watcher or the official Netflix Instant RSS feed]

Within this column we strive to pair the latest in theatrical releases to worthwhile titles currently available on Netflix Instant Watch. This week we offer alternatives to Snow White and the Huntsman, Piranha 3DD and Cat in Paris.

In this dark rendition of the tale of Snow White, the Huntsman charge to kill does not only take mercy on her, but also mentors her in her revolt against the evil queen. Kristen Stewart, Chris Hemsworth and Charlize Theron co-star; Rupert Sanders directs. For more fantasy and fairy tales:

Grimm’s Snow White (2012) Stewart’s is not the only Snow White who is armed. In this spirited TV adaptation of the classic tale, Eliza Bennett plays a blond version of the ruby-lipped princess, whose weapon of choice is a bow and arrow. But will her new-found might be enough to face down the evil queen’s dragons? Rachel Goldenberg directs.

The Fall (2006) Mirror Mirror helmer Tarsem Singh directs this lushly realized fantasy. Set in 1920s California, an imaginative but trouble-making girl meets a sullen stunt man in a palatial hospital. The two form an unlikely friendship as he weaves for her a remarkable tale of heroes, villains and heartbreak. Pushing Daisies’ Lee Pace stars.

Krull (1983) When beastly aliens capture his betrothed, Prince Colwyn sets out on a perilous adventure to rescue her. Along the way  he joins with a band of thieves, a Cyclops, and a bumbling magician known as Ergo the Magnificent. Liam Neeson and Robbie Coltrane co-star.

After creating carnage among the summering co-eds of Lake Victoria, a pre-historic batch of bloody-thirsty piranhas make their way into a bikini-bod stuffed waterpark. Like you do. David Koechner, Katrina Bowden and David Hasselhoff co-star; John Gulager directs. Fearing what lies beneath?

Shark Night (2011) A group of friends planned a beach house vacation full of fun, sun and water sports. But once one of their crew gets attacked by a vicious shark, they just hope to get through the weekend in one piece. Gory with a premise too bizarre to be believes, this island-set tale of terror offers some bloody fun. Donal Logue and Katharine McPhee co-star; David R. Ellis directs.

River Monsters (2009) For something slightly smarter, check out this TV doc series wherein self-proclaimed extreme angler Jeremy Wade reveals what frightening fish truly lurk in the murky waters of rivers and lakes, from the ill-reputed piranha to 700-pound stingrays. Wade debunks myths and uncovers the truth about these mysterious monsters, including vicious Goliath tigerfish in Africa, the snakeheads invading America and man-eating catfish in the Himalayas.

Tremors 2: Aftershocks (1995) Beneath the oil fields of Mexico writhe the man-eating monsters that first made audiences tremble in 1990. The only people can put an end to the pointy-teethed mayhem are veteran Earl Bassett, survivalist Burt Gummer, a young punk out for cash and a fearless scientist. Fred Ward and Michael Gross co-star; Andy Wilson directs.

This Oscar-nominated animated feature unfurls a thrilling mystery through the alleys and over the rooftops of the city of Love, while entangling a cat burglar, young girl, and the clever cat they have in common. Jean-Loup Felicioli & Alain Gagnol direct. The Secret of Kells (2009) This Oscar-nominated feature re-introduced moviegoers to the glory that can still be found in hand-drawn animation. Inspired by the incredible artistry of the Book of Kells, animator Tom Moore conceived of a story of a young monk who discovers the power of his own creativity by facing down the beast of the woods, with the help of an unforgettable sprite. This is a must-see for animation fans.

Mary and Max (2009) This poignant claymation was inspired by the incredible friendship that bloomed between two unlikely pen pals, an 8-year-old Australian girl named Mary Dinkle, and a middle-aged New Yorker with Asperger’s syndrome named Max Horovitz. Writer-director Adam Elliot reveals the twenty plus years of conversations the two shared, discussing their lives as well as sex, kleptomania, psychiatry, and taxidermy. Toni Collette and Philip Seymour Hoffman give voice Mary and Max respectively.

Cartoon Noir (2000) For something more experimental, try this collection of six shorts that offer distinctly unique styles and stories eschewing the expectations of traditional animation. Among the films are “Ape,” which features a couple fighting over a cooked monkey every night; “The Story of the Cat and the Moon,” which is a tale of unrequited love; and “Gentle Spirit,” which is based on a Fyodor Dostoyevsky story. Jon Benjamin Has a Van (2011) If you like your comedy with a healthy dose of irreverence and a dollop of wtf, then you’ll want to board comedian H. Jon Benjamin’s van. Best-known for his voice work in such offbeat cartoons as Home Movies, Archer, and Bob’s Burgers, Benjamin gets plenty of face time in this series which gleefully parodies various news program clichés with a shocking and absurdist blend of humor. Be it exploring the real Little Italy—peopled with thumb-sized Italian-Americans and their alluring daughters—or being bitten by a were-Jew, Benjamin gets into a new fix each week that he tackles with a growling indignation. Brilliantly off-color and boldly bizarre, this comedy show is as awesome and odd as its van’s paint job (seen above).