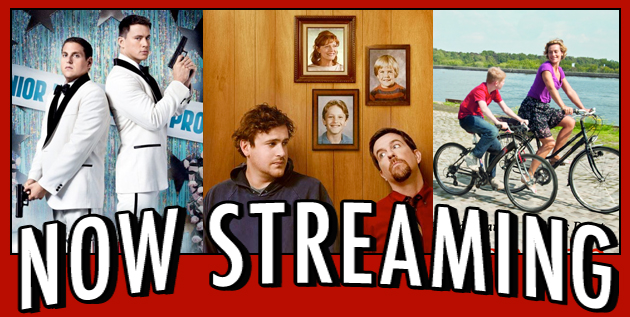 [Now Streaming] Your ’21 Jump Street,’ ‘Jeff Who Lives at Home’ and ‘The Kid With a Bike’ Alternative Each week within this column we strive to pair the latest in theatrical releases to worthwhile titles currently available on Netflix Instant Watch. This week we offer alternatives to 21 Jump Street, Jeff Who Lives at Home and The Kid With a Bike.

In theaters this Friday a star-studded comedy based on a TV drama will face off against an indie dramedy starring TV comedians, and a tender yet tough coming-of-age drama out of Cannes. But if this isn’t enough to satisfying your craving for cop capers, quirky comedy and touching foreign features, we’ve got you covered with a selection of the best titles Now Streaming. Dragnet (1987) Spun-off from the popular 1950s cop drama, this peppy parody stars Dan Aykroyd as Joe Friday, a no nonsense cop whose paired with Tom Hanks’ chops-bustin’ detective. Together this odd couple must uncover the mystery of a charlatan televangelist’s peculiar cult. Christopher Plummer and Dabney Coleman co-star.

Lethal Weapon (1987) Possibly the greatest movie cop pairing, Mel Gibson and Danny Glover team up for trouble in this classic action-comedy. Sparks fly when a harried LAPD detective called Murtaugh (Glover) is partnered with the shoulder-smashing loose canon that is Riggs (Gibson) in a case that grows wilder with every turn.

Beverly Hills Cop III  (1994) Eddie Murphy doesn’t share the spotlight with a partner in his third Axel Foley adventure. Sure, Judge Reinhold and Bronson Pinchot reprise their roles as straight-laced Billy Rosewood and the ever-fabulous Serge, but when his captain is killed by a mysterious and smug suit, no one can stop Axel from getting justice. He follows the clues from Detroit back to Beverly Hills and into the depths of a Disney-like amusement park, where he discovers some dark secrets hidden beneath all the family fun.

The latest comedy from the Duplass Bros. stars Jason Segel as a manchild who must be urged out his mother’s basement by his older brother, played by Ed Helms. Susan Sarandon and Judy Greer co-star. See the cast/crew in their TV hits:

How I Met Your Mother (2005) On this incredibly clever sitcom, Jason Segel co-stars with Josh Radnor, Alysson Hannigan, Neil Patrick Harris, and Cobie Smulders, playing five friends who look to maneuver through the rocky road to maturity in Manhattan with hilarious results. While the whole cast is incredible, Segel is thoroughly wonderful as Marshall Eriksen, a lumbering lawyer with a deep love for slap bets, board games, and his wife (Hannigan) and a crippling fear of Sasquatch. Seasons 1-6 are Now Streaming.

The Office (2005) Now in its 8th season, the American remake of the groundbreaking Britcom Ed Helms has stepped in to fill Steve Carrell’s shoes as Dunder Mifflin’s well-meaning but socially inept boss. But long before the Nard-Dog’s was top dog at the Pennsylvania paper company, he was a nicknaming paper pusher with some serious rage issues. Revisit how he rose up the kooky company’s corporate ladder by indulging in seasons 1-7, all of which are Now Streaming.

The League (2009) Jeff co-writer/director Mark Duplass heads up a cast of game comedians playing football fanatics in this deeply weird and totally hilarious FX sitcom. Each season (as in football season) six friends compete to defeat each other in fantasy football, a passion that leads to wild pranks and incredibly awkward social situations. Whether or not you’re a football fan, this take-no-prisoners show is easily accessible, and perfect for crashing on the couch. Stephen Rannazzisi, Paul Scheer, Jonathan Lajoie, Nick Kroll and Katie Aselton co-star. Seasons 1 and 2 are Now Streaming.

The Dardenne Bros. direct this poignant and raw coming-of-age drama about a young boy seeking love after being rejected by his father. Cécile De France co-stars. [My NYFF review.] Ponette (1996) This heralded French drama explores the grieving process by focusing on a 4-year-old girl (Victoire Thivisol) as she copes with the loss of her mother following a fatal car accident. Thivisol’s powerful performance made history when the talented toddler won the prestigious Volpi Cup, the honor awarded to the best actress at the Venice Film Festival, making her the youngest performer to receive this prize.

The Sleeping Beauty (2010) Acclaimed French filmmaker Catherine Breillat re-imagines the fairy tale of Sleeping Beauty in this enchanting yet deeply strange adventure. Little Anastasia dreams of growing up to be a knight. So when a witch’s curse throws her into a century of sleep, her fantasies become her reality. Along her journeys, she crosses paths with a variety of fascinating figures including an ugly ogre, an evil queen, and a dangerous gypsy. When she finally awakes, Anastasia has transformed into a young woman who must quickly adjust to the modern world and its confining rules of gender expectation. [My full review.]

Pocket Money  (1976) In this spirited feature also known as Small Change, François Truffaut explores some universal experiences of childhood through glimpses into the lives of French children ages 2 weeks to 14-years-old. From perilous baby behavior to dabbling in dirty jokes, giving a friend an ill-advised haircut, and the first experiences in dating, Truffaut captures growing up with a keen eye and a smart sense of humor. Shut Up Little Man!  An Audio Misadventure (2011) This thought-provoking documentary unveils the weird world of audio vérité, a movement that celebrates—or mocks depending on your point of view—the real-life recordings of unsuspecting speakers. Filmmaker Matthew Bate explores this subculture by investigating the people at the center of its most popular product, the “Shut Up Little Man!” recordings. The story begins in 1987 San Francisco, when two twenty-somethings moved in to a rundown apartment building and soon discovered their walls were thin and their neighbors insane. Next door a couple of older men would argue cruelly and relentlessly slinging insults and hurling drunken slurs at one another–including the famous, “Shut up, little man!” To cope with the mayhem, Eddie Lee Sausage and Mitchell D (as the called themselves) began to record their fights, and give snippets of the results to friends. Unexpectedly, the recordings caught on, spawning audio cassettes, comic books, plays and movie adaptations. While the story is interesting, what makes this doc truly intriguing is its murky dive into the ethics of this medium, where people’s private lives are surreptitiously recorded and made fodder for eager eavesdroppers. The results are unsettling in their ambiguity, making this a doc that’s hard to shake. [Sundance 2011 Review]