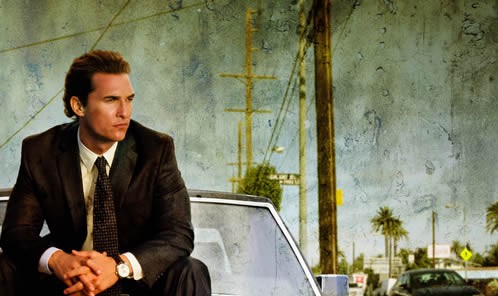 There’s no denying, Matthew McConaughey actually looks like a serious actor when he’s wearing a suit. And if this new trailer is anything to go by, then The Lincoln Lawyer could finally signal the end of his ‘I’m a hot surfer dude, cast me in a rom-com’ era. Hooray!

An adaption of Michael Connelly‘s best selling novel, McConaughey stars as Mickey Haller “a Los Angeles criminal defense attorney who operates out of the back of his Lincoln sedan.” Co-starring Ryan Phillippe, William H. Macy and Marisa Tomei, here’s the rest of the synopsis to get you familiar with the plot:

“Haller has spent most of his career defending garden-variety criminals, until he lands the case of his career: defending Louis Roulet (Ryan Phillippe), a Beverly Hills playboy accused of rape and attempted murder. But the seemingly straightforward case suddenly develops into a deadly game of survival for Haller.”

Check out the Youtube version of the trailer below or click to watch in HD via Apple.

Is this something you’ll be taking a trip to the theater to watch?

Directed by Brad Furman, The Lincoln Lawyer opens in cinemas on March 18th, 2011.