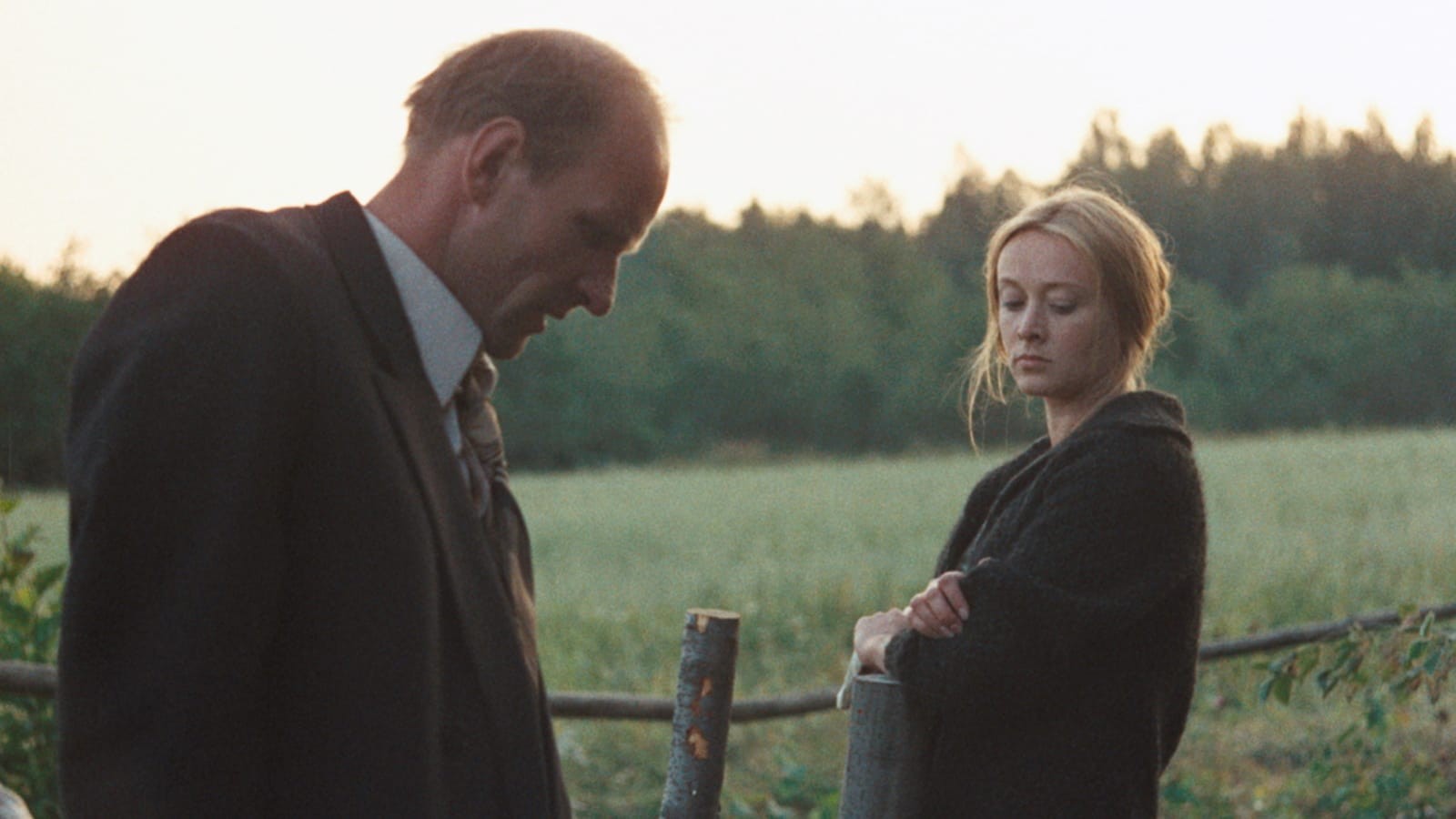 Originally a Cannes selection, then coming to San Sebastian, TIFF, and NYFF where it picked up deserved awards, the Georgian film Beginning is a difficult, sometimes brutal film to watch and then unpack. Déa Kulumbegashvili’s debut is a look at the confines, both religious and familial, put on one woman’s (Ia Sukhitashvili) life as she wrestles with outer and inner demons. Both a lonely and patient film, Beginning acts as mirror and portal, creating turmoil and strife for audience and subject. Challenging yet rewarding, Beginning is phenomenal. – Michael F.

When Simon Stone’s The Dig begins with Basil Brown (Ralph Fiennes) towing his bicycle across the water in a boat towards Sutton Hoo, it’s natural to align our expectations with an archeological adventure. Because he’s labeled “difficult” by the museum that more or less told Edith Pretty (Carey Mulligan) her desire to excavate the mounds present on her land isn’t worth their effort with war looming, the two prove themselves to be a perfect pair of underestimated and ignored figures on the cusp of finding something great. The first whiff of the treasure she always believed was there and he expertly deciphers the whereabouts of finally turns the heads of those who initially turned their backs and we settle in for a conflict amidst the dirt. – Jared M. (full review)

After watching over 400 films in the span of just around four months, director Frank Beauvais reflects on his life and what led to this cinematic hibernation in Just Don’t Think I’ll Scream, an impressive, rapidly-edited, and deeply personal cinematic essay. Created solely from clips of the films he watched, it’s far from the kind of video essays that dominate YouTube, rather selecting the briefest of moments, and usually the least-recognizable of shots, in crafting this self-exploration of a reflective, questioning mind. – Jordan R.

Joe Deacon (Denzel Washington) never wanted to return to Los Angeles. It didn’t matter that he had a good life there before his divorce and estrangement from his daughters. It didn’t matter that he’s now a Sheriff’s deputy in a small town when he used to be a big city detective with the department’s highest clearance rate. His fall from grace scarred him enough to know that setting foot in the City of Angels again would bring the memories he’s struggled to suppress during sleepless nights back into crystal clear focus. Deke has no choice, though, when his boss sends him to procure evidence for a case set to go to trial the next day. And it doesn’t take long to find himself right back where he started. – Jared M. (full review)

American novelist Jack London was an active proponent of socialism, his writing offering self-reflexive deconstructions of their values within distinct, incongruous, futuristic worlds, temporally far-flung but with technology and attitudes contemporaneous to the turn of the century. These qualities are prevalent throughout Martin Eden, Pietro Marcello’s fantastic second fiction feature that stands as a spellbinding synthesis of both London’s speculative ideas and Marcello’s documentarian instincts, capturing the clairvoyance and spirit of London’s writing via Marcello’s sensibilities as a predominantly non-fiction filmmaker. – Kyle P. (full review)

Following the recent restorations of Stalker, Andrei Rublev, and The Sacrifice, the latest Andrei Tarkovsky masterpiece to get the treatment is Mirror, his personal, poetic 1975 collage. Michael Snydel said in his preamble to a discussion of the film with Logan Kenny on Intermission last year, “A Russian auteur unfairly accused of a punishing austerity for much of his career, his 1975 film is a ravishing piece of autofiction that bleeds together the past, present, and future into a non-linear vision that’s less interested in continuity than a bracing emotional logic. It’s a film fixated on memory but not the full stories that shape us as much as the visual shards that inflect a persons.”

While playing a game of “mafia,” Babak (Shahab Hosseini) and Neda (Niousha Noor) are tasked with figuring out who amongst them (it’s an evening with friends rounded out by two more couples) are gangsters and who are citizens. The idea is to therefore lie if you’re the former. Pretend you’re innocent and point your finger elsewhere in hopes that the majority of players choose to “kill” the wrong person. A poker face is king and in this case salvation for those searching for one last victory before kababs are grilled and conversations move to more serious matters. That’s not to say this sort of deceit doesn’t also bleed into those matters too. Secrets are inevitable. They sometimes prove necessary. The question becomes whether you can stomach the guilt. – Jared M. (full review)

In 2017, by the time the Chinese government began to furiously clamp down on the country’s live-broadcasting frenzy, a whopping 422 million Chinese regularly tuned in to stream their everyday lives, and watch other people broadcast theirs. Think of the whole phenomenon as a cross between video games and reality TV. Live streamers, otherwise known as anchors, sit before the camera to perform all sorts of routines, from the most uber-eccentric dance to the most ostensibly banal stroll; audiences reward them with gifts, which the streamers can exchange for cash. Zhu Shengze’s poignant Present.Perfect. follows a dozen anchors over a period of ten months. It distills some 800 hours of live footage into a 124-minute documentary–a black-and-white collage stirring questions that far transcend the country and the zeitgeist it captures. – Leonardo G. (full review)

Where to Stream: MoMA’s Virtual Cinema

For the first time ever, due to rethinking the festival during the pandemic, the films of Sundance Film Festival are now available to stream nationwide. We’ll have much coverage unspooling over the next week-plus, so stay tuned here, and pick up tickets while you still can.

Where to Stream: Sundance Film Festival

Naomi Kawase is a divisive name on the festival circuit, though you might be surprised that’s the case when actually watching her work. A mainstay at the Cannes Film Festival for over two decades, Kawase boasts fluidity in form and feeling. She blends documentary and fiction while putting her stories within a context that reveres the natural world, an approach that has inspired admiration for some and annoyance for others. But whatever one accepts or rejects from Kawase’s films is irrelevant to the fact that she has a distinctive voice, and the way her vision adapts to or clashes against cinematic conventions can be a rewarding experience in itself. True Mothers, Kawase’s adaptation of a novel by Mizuki Tsujimura, might be her most plot-heavy work to date. – C.J. P. (full review)

What Happened Was… (Tom Noonan)

While often considered a cult figure for his roles in Manhunter, Last Action Hero, RoboCop 2, and The Monster Squad among sundry others, Tom Noonan is perhaps most deserving of praise for his fiercely intelligent, emotionally lacerating, and masterfully composed work as a writer-director. 1994’s What Happened Was…, in which he is also lead actor, is a paramount achievement, making all the more shameful its relegation to relative obscurity for more than 25 years. This Friday, however, sees the virtual release of a remarkable 4K restoration, to which I can pay the finest compliment one might afford: as a longtime fan I simply did not think the film could look this nice. Read my full interview with Noonan here. – Nick N.

The Future
Meanwhile on Earth
The Tree, The Mayor and the Mediatheque
Citadel
Woman on the Beach

#LIKE
A Woman’s Work: The NFL’s Cheerleader Problem (review)