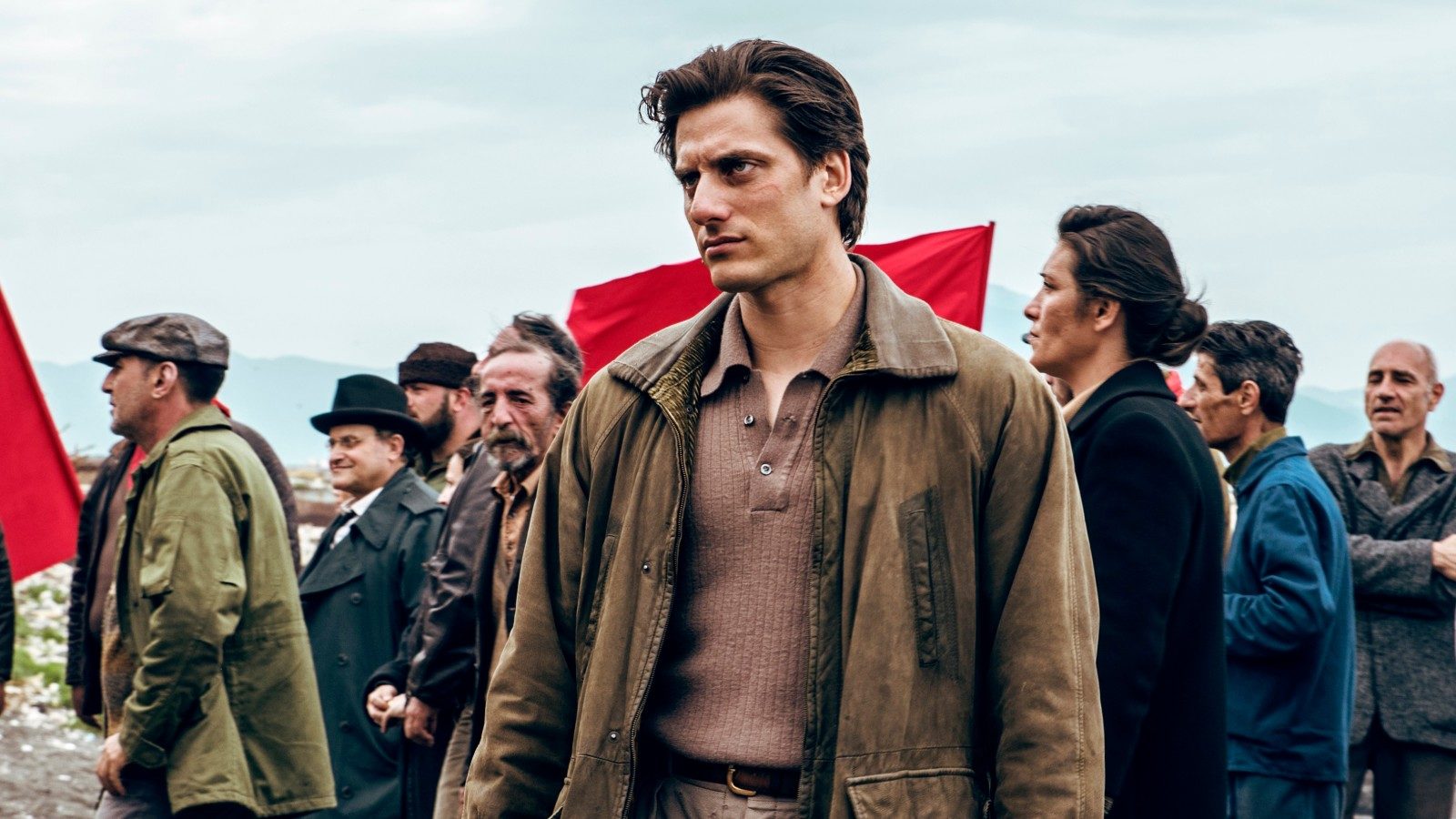 American novelist Jack London was an active proponent of socialism, his writing offering self-reflexive deconstructions of their values within distinct, incongruous, futuristic worlds, temporally far-flung but with technology and attitudes contemporaneous to the turn of the century. These qualities are prevalent throughout Martin Eden, Pietro Marcello’s fantastic second fiction feature that stands as a spellbinding synthesis of both London’s speculative ideas and Marcello’s documentarian instincts, capturing the clairvoyance and spirit of London’s writing via Marcello’s sensibilities as a predominantly non-fiction filmmaker.

Eden follows the eponymous protagonist through pre-World War II Italy, changed from the novel’s pre-WWI America. Despite his undereducation, the young sailor—imbued with wily charm by a mesmerizing Luca Marinelli—is a promising writer, though he’s constantly struggling to make ends meet, frequently unemployed because of firm commitment to his rights as a worker. When not at sea, he’s either searching for an outlet to take a chance on publishing his radical poetry and prose. While Martin’s writing, personal politics, and bohemian lifestyle are often rejected or misconstrued by those around him, confidence and ambition endear him to some, including a cantankerous geriatric duo who sell him books, playfully chiding each other as they haggle for more money. Above all, the person who is most enamored with Martin is his betrothed, Elena Orsini (Jessica Cressy), a demure but headstrong debutante who’s his emotional respite from the crushing reality he faces as a proletarian.

Elena’s advocacy and support gives Martin the motivation to write, although she and her family are apprehensive of the ideological underpinnings of his stories. After taking in an evening movie, the couple express opposing views on the film, which eventually leads to an argument about Martin’s staunch ideology and thus, by extension, his writing, with Elena finding it “raw and sad.” Incensed by her remarks, Martin forces her to walk through a poor neighborhood in the city, primarily depicted through subjective shots from her POV and illustrated via shallow-focus, creating an impressionistic texture invoking the portraiture of 19th-century Italian painters such as Silvestro Lega. Cinematographers Alessandro Abate and Francesco Di Giacomo shoot in lush Super 16mm to bring the period to life, at times implementing archival 16mm and 8mm footage intercut alongside the fictional material, seamlessly blending the two into a boldly unified aesthetic.

This blending of real and fictional imagery gives Martin Eden an extraordinary spectral quality, almost uncanny, like how it can feel looking at colorized photographs from an era generally seen only in monochrome. It further serves as a clever visual metaphor and framing device for Martin’s ambition to succeed as a writer yet remain true to his working-class roots. See the extended third act where we see Martin as a shell of his former self, having regressed into a rich, egomaniacal misanthrope, embracing the resentment deep within him that occasionally surfaced at the lowest points of his younger years. Martin’s egotism gets the best of him, transforming him into a narcissistic recluse who looks older than he actually is, his newfound wealth and cynicism having totally consumed him, turning his hair pale, rotting his teeth, and eroding his compassion for others, including Elena.

Production design thus far evoked pre-war Italian fashions and technology, but Eden now teeters on the edge of two eras: the clothing, cars, and architecture of the Cold War ’60s and ’70s with remnants of the pre-war period present like distortions in time—anachronistic memories that Martin cannot shake as he loses his grip on reality. Complicating matters is a smattering of characters old and new–Elena returns, for example, pleading with the now broken and wretched Martin to leave with her and start over. The encounter plays out like a space in Martin’s imagination, nobody but the two being present, Elena not having aged much if at all. It’s a beguiling climax that begins in intense, riveting melodrama before sleepwalking into a penultimate illusory passage that sees Martin literally chasing after his optimistic youth.

Martin Eden marks a breathtakingly ambitious sophomore effort from Pietro Marcello, balancing elegant melodramatic storytelling with a fascinatingly oblique character study, gracefully mixing non-fiction and fiction narrative styles in the process. With a remarkable central performance by Luca Marinelli, Martin Eden’s rise and fall is portrayed with nuance and flair, utilizing expressive, unconventional editing structures and 16mm cinematography that’s simply to die for. Ultimately, the greatest tragedy of Jack London’s character might not be the love he left behind or that he may never find her again, but rather the years in-between that are now lost, seemingly forever. That is, the years not shown, what could be inferred to have taken place during the film’s indeterminate jump forward between the second and third acts. During this time it’s clear Martin found fame and fortune, yet his connection to his modest beginnings severed and his brightness shrivelled, fading his youthful spirit into a graying shadow fueled by spite.

Martin Eden played at NYFF and opens on October 16, 2020 via Kino Lorber.