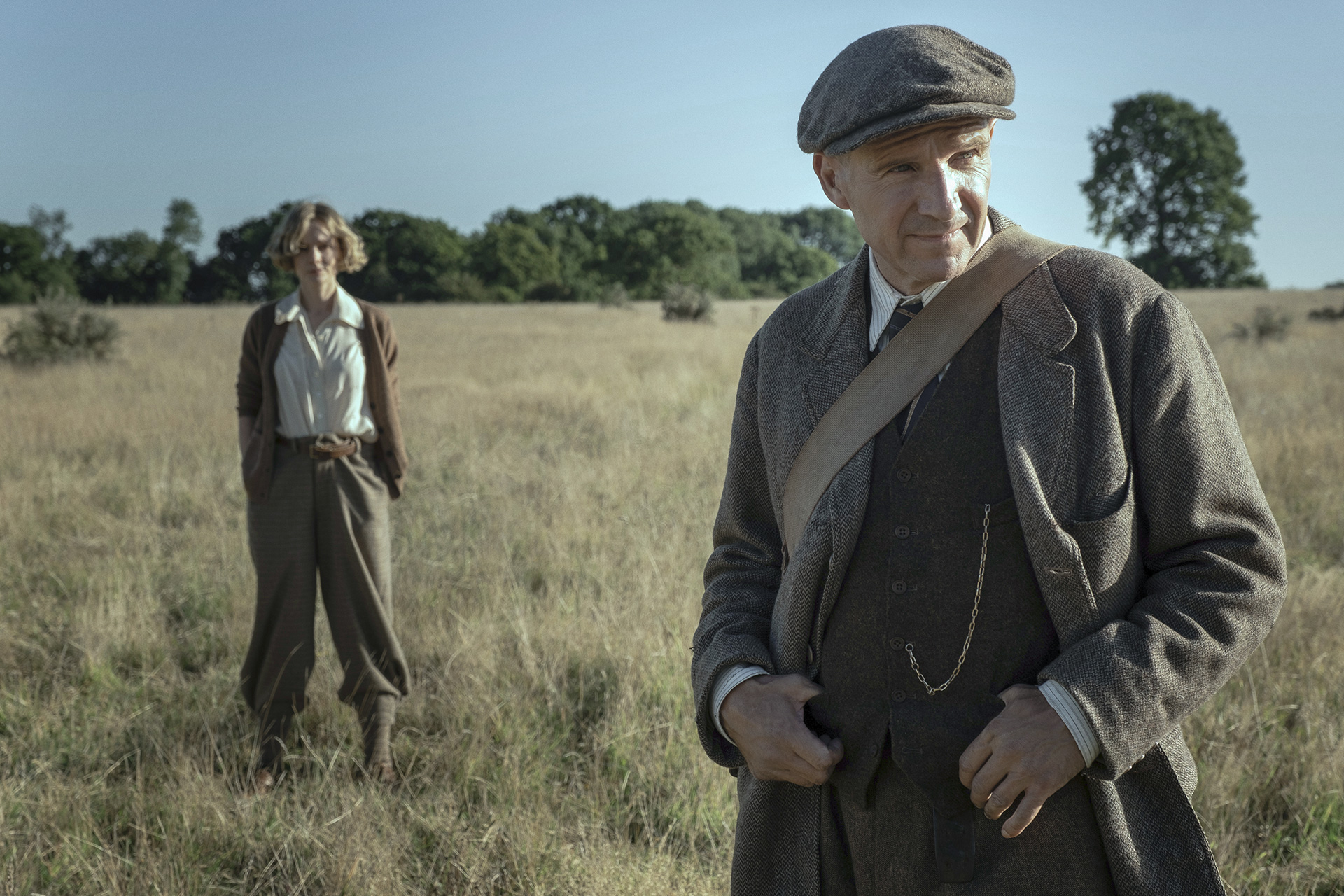 When Simon Stone’s The Dig begins with Basil Brown (Ralph Fiennes) towing his bicycle across the water in a boat towards Sutton Hoo, it’s natural to align our expectations with an archeological adventure. Because he’s labeled “difficult” by the museum that more or less told Edith Pretty (Carey Mulligan) her desire to excavate the mounds present on her land isn’t worth their effort with war looming, the two prove themselves to be a perfect pair of underestimated and ignored figures on the cusp of finding something great. The first whiff of the treasure she always believed was there and he expertly deciphers the whereabouts of finally turns the heads of those who initially turned their backs and we settle in for a conflict amidst the dirt.

While Moira Buffini’s script (as adapted from John Preston’s novel) does include that inevitable struggle (Does ownership of this historically priceless find stay with Edith or go to Britain? Will the artifacts be shipped to the British Museum or stay local in Ipswich? Will credit remain with Brown or become usurped by Ken Stott’s renowned archeologist Charles Phillips?), it’s merely a backdrop for so much more. I should say a second backdrop because, as previously mentioned, we’re weeks from World War II. This is 1938 and Germany is pushing Europe to the brink. Again. Resources are limited, time truncated, and the risk of losing this glimpse into the past almost insurmountable. But what of the people working hard regardless? What of those buckling under the preciousness of today?

What this find represents is therefore far beyond the objects themselves. It’s about heritage and history and immortality. It’s about a young boy who never met his father (Archie Barnes’ Robert Pretty) looking at what’s been buried as a message from the dead. It’s about a widow locked inside a giant estate that sacrificed her love in one war only to watch with sorrow as others ready to do the same during every visit to London. It’s about a man who learned his trade from his father (and he from his) that’s as good or better than anyone who was taught in a university. It’s about how our families guide us in life and death. So what we do with the responsibility of carrying their memory forward matters.

The insignificant battles by comparison of museums vying for acclaim are thus rendered exactly that: insignificant. There are more important things in life than where a trinket can be seen and it’s those very trinkets that prove it because our affinity for them is a direct result of the power they hold. The same goes for the stars in the sky that Brown’s telescope brings into focus and the unyielding desires of humanity on the ground seeking to love and be loved outside of society’s restrictions. What then do we feel upon walking through a museum? Do we wonder how much each exhibit is worth? Or do we wonder about those who crafted and used what’s on display as a way to reach back and recognize ourselves within?

As the barrier between life and death dissolves for these characters toiling in the hot sun, we witness as those who know the latter to be true take a step back to survey the here and now. There’s Edith’s secret illness that everyone (even her young son) sees with full clarity. There’s Basil’s drive to let the work speak for itself as the things he uncovers whisper their truths upon the wind. Add Edith’s cousin Rory Lomax (Johnny Flynn), archeologist couple Stuart (Ben Chaplin) and Peggy Piggott (Lily James), and others and we realize how the gravity of circumstances beyond our control help us focus upon that which is. As those who died centuries (or days) ago can attest, life should never be taken for granted.

The Dig is thus an elegy as well as an awakening. That duality is what history provides us after all. And the parallels and visual cues Stone and Buffini layout can’t help but get us to open our own eyes to how it is we’re spending our time. There are so many beautiful moments whether as a result of editing (numerous sequences merge images of before and after underneath dialogue that encompasses both, the poetic cuts placing emotion above action at every turn) or juxtaposition (Brown sliding drawers of gold under Edith’s bed only to find something more precious and valuable was already resting there in the darkness) that it’s impossible not to get swept up in the quiet anxieties every punctuated laugh of joy helps to combat.

This site is bringing people together by supplying them a distraction from their woes all while providing a safe haven of kindred spirits able to see past the veil of decorum and into the hearts of drowning souls. That Basil can break into Edith’s home despite her butler refusing him entry from the front door is a display of his passion to continue. That Peggy can see beyond her husband’s shyness for what it truly is and know that any future attempting to deny it would ruin the potential for happiness they both possess is evidence that our minds will not abide self-deception when the prospect of tomorrow is no longer something we can afford. And we acknowledge these truths without Buffini forcing dialogue to literally explain it.

Goodbyes are unspoken. Forgiveness implicit. Love unbreakable. That Stone allows this tale to move beyond history’s physical scars to address the emotional ones (if not to also strive and heal them) turns what may seem like a generic period piece on paper into a transcendent look at what makes us tick underneath the cultures, customs, and stations we’re conditioned to believe trap us from reaching our full potential. These people are excavating past the soil and into their own hearts, vulnerably laying bear their hopes and regrets in ways that shatter the divisions between to reveal the humanity connecting them instead. With superb performances (Fiennes, Mulligan, James, and Flynn shine), gorgeous cinematography, lyrical editing, and a complementary score, the film proves a melancholic wonder that isn’t easily forgotten.

The Dig hits Netflix on January 29.