The Score Review: Johnny Flynn and Will Poulter Lead a Heist Film with a Musical Twist 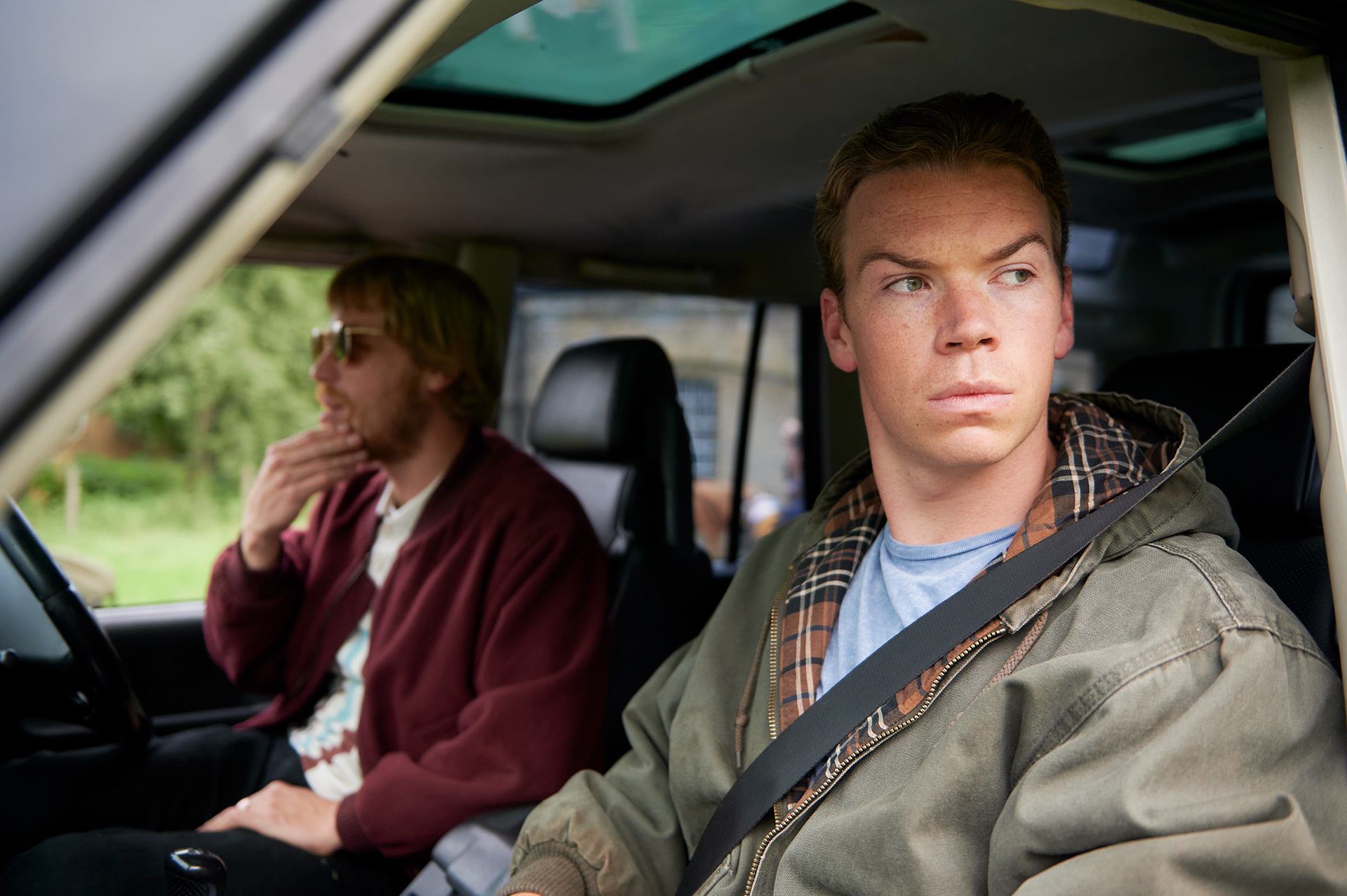 As Troy (Will Poulter) muses on the car ride out-of-town to meet with “professional criminals” (he and Johnny Flynn’s Mike realize they’re amateurs at best, still trying to move their way up) and exchange 20 grand for unspecified goods, “score” is one of those words with multiple meanings. Film score. Settling scores. Scoring on the soccer field. Scoring in bed. While it’s as much a monologue to explain writer-director Malachi Smyth’s decision to title his film The Score as it is the set-up to an as yet-to-arrive punchline during the denouement, the real reason for its existence is to let audiences in on the central dynamic. Where Mike is all business, Troy cannot help himself from living life no matter the stakes, consequences, or his companion’s annoyance.

The reason is simple: Troy is only adding “criminal” to his “amateur” title because his brother Derek forced his hand. Derek is the one who helped Mike secure that cash and Derek’s the one who ended up in jail before they could do anything with it. Responsibility thus falls upon Troy’s shoulders—as someone his brother trusts to do right by him, and as the only other person who knows the money’s hiding place. As soon as Mike knows the cash is in-hand, he’s unafraid to let the young pugilist know as much. Frustration doesn’t, however, excuse the fact that he needs back-up and Troy is good in a pinch—if a bit quick to fall prey to impulse where thoughtful problem-solving is needed.

If that sounds like yet another odd couple case of a cruel pragmatist reliant upon certainty opposite a sweet liability on the Asperger’s spectrum, you’d be correct. And you’d be forgiven for rolling your eyes and letting out a sigh for the death of originality during the opening 10-to-15 minutes too. Thankfully, Smyth isn’t utilizing this recently well-worn gimmick as the point of his film. It’s merely a way to differentiate Troy from Mike insofar as “good” and “bad” goes. Yes, it’s a clumsy way of doing so and makes it seem like a genuinely earnest soul cannot exist in a “man’s” body without some sort of quirk, but it does the job and is more or less left alone after we meet Gloria (Naomi Ackie).

She’s the waitress at the diner where Mike was told to meet his sellers; Troy becomes instantly enamored. Though Mike tries corralling his accomplice into sitting silently while they wait—a fool’s errand: the latter is a magnet for calling a wealth of unneeded attention to them—Troy is easily distracted and, frankly, not as invested in this exchange as Derek would have been. In fact, he’s starting to question the logistics of the whole thing once details start to confuse and contradict themselves. He trusts Mike, though. He doesn’t much like the way he’s being treated and knows he’s only there as a last option, but they grew up together. They’re like family. And if playing bodyguard provides time with Gloria, it’s worth it.

It is to us, too, considering the criminal aspect is less about plot than it is a device to introduce romance. This meet is the reason Troy and Gloria cross paths, but what they do with that fateful collision is why we keep watching. It would be impossible not to—Poulter and Ackie are so cute together with their acerbic flirtations. Both are idealists, in a way, even if his belief that you can simply take what you want has never been her experience. The money has allowed Troy an optimism that Gloria’s current personal drama has all but squandered. Their interaction melts those worries and hopes away; nothing else matters in the moment. As is often the case, however, the past and future complicate things.

I’ve yet to mention The Score is also a musical. Flynn wrote all the songs, the cast singing each well—beyond the odd moment of soaring vocal emotion being met with a subdued performance to confirm they’re lip-synching pre-recorded studio renditions—but I wouldn’t say they’re necessarily a defining attribute of the whole. The music flows seamlessly in and out to get characters’ thoughts and feelings into the open, much as an interior monologue might. It does help our investment by drawing us in, but I think I was “in” anyway. Think of the songs as augmentation rather than substantive. They get us in the mindset of fantasy versus reality and the underlying theme of love versus money. Which matters most?

Mike would obviously say money. Troy might have too before meeting Gloria, but more as a means of moving on than staying put. While Mike needs that cash to sustain what he already has, Troy sees it as potential for escape. Both ultimately target the abstract notion of “a better life,” but their motivation is vastly different. The former sees only obligation. Mike’s jaded to the point of selling his soul for an amount that our millionaire politicians can’t fathom is life-changing enough to ever pass meaningful financial or economic reform. Troy is a dreamer. A lover. He sees that money as the seed for boundless potential because he’s yet to forsake hope. And Gloria sees it as a price all its own—a promise of darkness.

She’s not wrong, either. Smyth wrote an infectious romance as our entry point into this world, but he never pretends the overall sentiment isn’t tragedy. I love when Troy tells Gloria that they can run away together and she laughs, saying “You might be a bit dumb, but you are sweet.” He counters by revealing they can run away with $10,000; her smile fades. “You’d be a bit smarter, but also probably less sweet.” It’s such a small moment that speaks volumes about the message that money is only as good as how it was earned and those who are spending it. That cash is salvation and demise. The scales always balance. If Troy is fast, he still can’t outrun destiny.

There’s a twist along the way, too, but Smyth is smart enough to know twists are only as good as their purpose and not their surprise. This one excels because it makes sense. For being revealed around the halfway point it also allows a deeper dive into the characters involved so it won’t simply live or die on the filmmaker’s self-satisfaction. Its betrayal has the complexity to ensure it also harbors regret; we can wonder if it’ll still happen by the end. Regardless, it never overshadows the love story. It may even strengthen it, solidifying the bond Troy and Gloria share as more than a lustful day of fancy. It’s brief, but real.