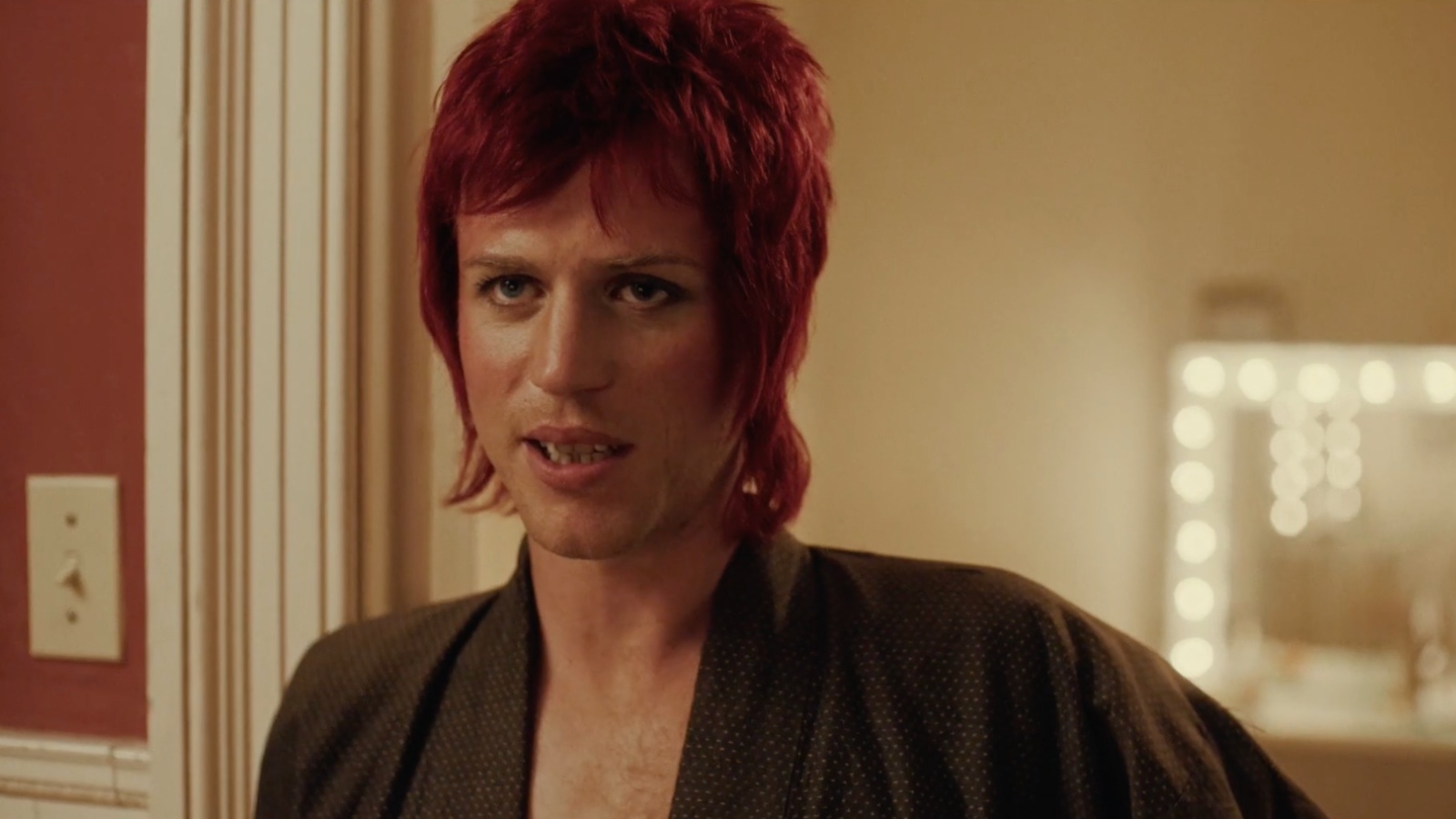 “What follows is (mostly) fiction,” begins Gabriel Range’s lacklustre David Bowie biopic Stardust. What’s true is that in 1971, after “Space Oddity” but before he blew up on the world stage as Ziggy Stardust, David Bowie (Johnny Flynn) embarked on a small tour of America. What’s made up by Range and co-writer Christopher Bell is most of what happened on that tour—including the music Bowie played. As his son Duncan Jones tweeted last year, Stardust was made without the blessing of Bowie’s family, thus without rights to his music. The result is a biopic in search of a point, attempting to uncover the creative mind that birthed the Stardust persona without being able to show us the results of his creativity.

Stardust attempts to shrink the larger-than-life star down to human size by focusing on a concentrated point in pre-fame Bowie’s life. We’re introduced to Flynn’s David as he arrives at an airport in Washington, D.C. and encounters problems with his paperwork: he doesn’t have a work visa, so he’ll only be able to play small venues, and while he can talk to press, he’s not allowed to sing for them. (This odd detail is in fact true, but also a convenient way for Range to partially explain away a lack of Bowie songs.)

Hapless music publicist Ron Oberman (Marc Maron) greets him outside and drives him—not to a hotel, but his own home, where David will be staying in the spare bedroom. It’s hardly star treatment. The next day they embark on a road trip and meet disappointment after disappointment: David struggles to explain his oddball music to skeptical journalists and Ron grows increasingly exasperated at the musician’s lack of media savvy.

Despite his attempts to demystify Bowie, Range’s filmmaking is more over-wrought and obvious than grounded and human. I almost groaned aloud at the opening scene, essentially a shot-for-shot fan remake of the ending of 2001: A Space Odyssey with Keir Dullea replaced by Johnny Flynn. It turns out to be a dream sequence, but serves no purpose other than looking flashy and referencing Bowie’s love for the film, which is never touched upon again. Later there’s a scene where David’s manager asks him point-blank, “Who are you, David, as an artist?” while the camera slowly zooms on Flynn’s face, emphasizing that Range doesn’t trust the viewer with subtext.

There are some grace notes. In one, David sings an acoustic cover at a small venue, and he’s fully immersed in the music—but every time we cut back to Ron watching restlessly from the bar, the sound quality changes to be more tinny. The fluctuating sound and Maron’s nervous energy as his eyes flit around the bar full of disinterested patrons beautifully evoke Ron’s anxiety, as he hopes in vain that someone will pay attention to the promising musician on stage. Still, these moments are few and far between.

Despite the dozen layers of wigs and prosthetics they’re buried under, Flynn and Maron are two of the film’s highlights. Actor-musician Flynn—whose acting skill I was skeptical of when he first arrived on the scene, but impressed me this year in Emma.—manages to evoke Bowie without going OTT on the star’s recognisable mannerisms. Maron makes a fun partner, though his makeup and hair styling is somehow even sillier than Flynn’s, despite the fact that he’s not playing a famous person. We all know what David Bowie looks like, but few of us have a mental image of Ron Oberman to hold Maron up to; why have they made him look like a Madame Tussauds’ version of himself?

Stardust makes an interesting turn in its latter half: through flashbacks, Range reveals the history of psychosis in David’s family that led his older brother to be institutionalized. It’s a revelation that recontextualizes the way David avoids personal questions from journalists and makes vague, deflective statements about drugs and madness in interviews. If you asked Range why he wanted to make this movie, he’d probably tell you he wanted to uncover David’s fear that he himself would fall victim to schizophrenia, and how that informed his music about madness. Range even abandons nearly all other plot threads to focus on this in the final act. But there are too many missing psychological pieces in this story for it to feel poignant or respectful.

If it is possible to make a good David Bowie film without any David Bowie music—and without the blessing of Bowie’s family—then this certainly isn’t it. (Side note: heard of Velvet Goldmine?) In his attempt to peel back Bowie’s enigmatic personas, Range ends up with a film lacking in insight, more bland than awful or offensive. As David says at the end of the film when he refuses to give an interview to a group of American journalists, “aliens don’t mingle.” Maybe it should have stayed that way.

Stardust is now available on VOD.