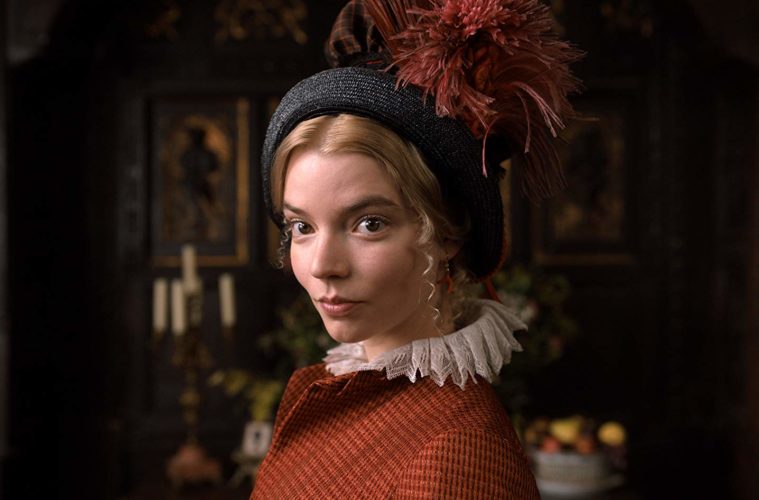 Draw the quick conclusion for why I had little desire to note-take during Emma. (stylized with a period; reasons probably unnecessary), but don’t mistake this limited interest as a dismissal of the entire project. And if whatever compliments it can be paid require meager critical insight, these virtues are nevertheless evident: its ensemble cast befit their talky material with total charm; its design elements, a live-or-die component of 19th-century period pieces, are often exquisite; and notwithstanding slightly anemic aspects to its digital palette, this ornate package is photographed with care.

For some (see: me), the key interest in not Jane Austen’s oft-adapted text but its adaptor, Eleanor Catton–a brilliant, precocious novelist of elegant debut The Rehearsal and doorstop-sized, Man Booker-winning The Luminaries. Her more-or-less-first crack at screenwriting (the only other credit is a forthcoming TV adaptation of her second book) goes to Autumn de Wilde, a debut director whose heavy CV is devoted entirely to music videos and commercials. Though their combined talents wouldn’t denote Emma. as an apprentice work, exactly, it suggests the opportunity to witness fresh talents ascend.

Catton’s effort sadly rings closer to translation than adaptation. A cursory glance through Austen’s text will immediately recall this film’s voluminous run of Victorian cross-talk, doublespeak, and subterfuge; by the admission of its creatives, their Emma. is, as much as anything, opportunity to indulge in, with an occasional (ostensible) twist, the environment out of which this material first sprang. From the word go–we open with a literal appearance of the novel’s opening sentence–we’re in Austen country. Not a bad place to be. These books haven’t endured for centuries as a fluke nor found their way onscreen despite some lack of fertile dramatic ground. How much time you should devote to another stately comedy of manners–a term used instinctively but is part of the official history for describing Emma‘s narrative and emotional threads–and how often you’ll consequently ask yourself what exactly we’re doing here is your game.

Worth reemphasizing that all assembled players rise to the occasion, and Emma. generates most interest when the effects of its verbosity begin paling against non-verbal turns. It could be said an entire second film plays on their faces–medium and master shots alike hold to let the ensemble delineate between the era’s suppressive climate and more timeless comedic mugging. The key is its Emma, Anya Taylor-Joy: hard as it can be to assess a young performer, there’s something especially promising in anyone who’s rendered both M. Night Shyamalan’s theme-heavy lyricism and Austen-by-way-of-Catton’s social maneuvering equally viable.

More credit when such little rhythmic variation exists scene by scene. Characters meet, a conflict becomes apparent, one or the other’s hidden motives bubble under, a quip, cut, all quickly exhausting possibility. Yet de Wilde and DP Christopher Blauvelt hone a pleasing visual pace. Legible geography is neatly established between the many rooms and surrounding areas of action; subjects are actually followed as often as they’re observed, putting lie to expectations this would be static; and in its actual stillness one will find an intelligent variety in set-ups to enliven when necessary, to ends that are in fact possible. I enjoyed sitting with Emma. even as its verbiage only grew flatter–it exhibits a knack for the music without nailing its lyrics.

That leaves us at a midpoint of interest, which at some healthy two hours finally won’t cut it. But if all involved have reason (and financial fortune) to convene again, I suspect the path is worth going down a bit further. For now, this one can slide off easily enough.