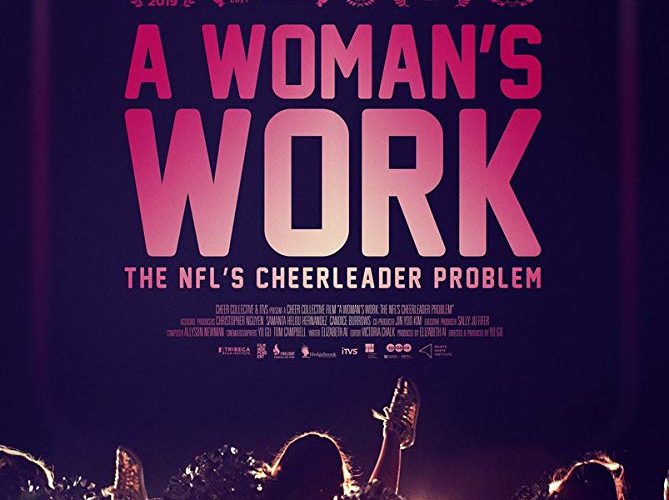 Everything in this world comes down to control and that’s what makes the work being done by minority classes (gender, race, sexuality, religion, etc.) so important today. When those in power look the same (white, male, old), there’s little room to want to look outside their sphere of influence and recognize their impact upon anyone else but themselves. That’s where the manipulations come in and why they’ve become as easy to perform as breathing. And it all compounds in the case of NFL cheerleaders because of how our society’s patriarchal gaze perceives them. Outsiders dismiss them as less than and that ingrained misogyny even makes it difficult for them to disagree. Turn a fight for equal rights into a display of ungratefulness and exploitation is mistaken for reward. That’s pretty much the defense presented by the NFL and its football teams that still employ cheerleaders. In their minds they’re granting these athletes permission to operate under their seal of approval. Like so many artists spanning infinite mediums know, this warped idea of “work for exposure” is a gross fallacy perpetuated by companies and clients trolling for free service. But it works because we’re taught to underestimate our worth. We’re taught to salivate at the promise for paid commissions that never come. Saying, “Yes” ultimately puts their hooks in you by cultivating a complacent, defeatist attitude that the struggle is your only option. You want to dance in front of thousands? Sure. We’ll let you do that … for free. And don’t forget to say, “Thank you.”

As Yu Gu’s documentary A Woman’s Work: The NFL’s Cheerleader Problem shows, however, there’s always a point at which you can say enough is enough. Former Raiderette Lacy Thibodeaux Fields reached it after one year because the out-of-pocket expenses paid to remain on the team were never recuperated. She was instead paid less than minimum wage, only for game day appearances (not practices), and only at the year’s end. Travel cross-country to Buffalo and things are even bleaker. Not only was Maria Pinzone not paid a cent to be a Buffalo Jill, she was volunteering at this for-profit entity to make her bosses money at her expense. These women did agree to those terms—no one disputes that fact. The issue therefore stems from those terms being illegal. Gu and writer Elizabeth Ai take us into Lacy and Maria’s lives as they choose to fight the behemoth that is America’s favorite pastime. Both cases fall under wage-theft (with the additional revelation of sexually abusive “jiggle” tests that dictated whether a woman was “suited” to take the field that day) and both become class action lawsuits that of course find the same type of pushback as union organizers face. This is where the constant reiteration of “family” enters the fray because anyone who joins the fight is ostensibly “hurting” mommy and daddy. What did they give you to earn that loyalty, though? What were all those hours worth to them when they’re all but happy to settle with gag order stipulations and zero apologies? Where’s the love?

There isn’t any because this is business. Cheerleading is a career that only the most talented, athletic, and personable women are able to perform … much like the men for whom they’re cheering. That perspective isn’t easy to come by, though, in a world that has been trained to accept the arbitrary disparity between gendered occupations. Gu isn’t afraid to show just how pervasive this psychological wiring is either when Lacy’s father admits his daughter being a member of the highest league in her sport isn’t equal to a hypothetical son being a professional footballer. It’s not just drunk dudes projecting their own sex fantasies upon cheerleaders to then degrade them as whores. It’s dads, husbands, and sisters who are slaves to a status quo that can change. Because of who remains in power, however, any progress is glacially paced. That’s why Lacy and Maria are such potent examples to focus on above the many who followed in their footsteps (the stat said a third of NFL teams have pending litigation stemming from cheerleaders). Their parallel journeys see moves to other countries, deaths of parents, and births of children. As their lawyers find new areas of egregious conduct to loop in commissioner Roger Goodell as a defender himself, their lives carry on. Women they called friends reject what they’re doing; those of previous generations prove why Baby Boomers need to disappear so we can wrestle the reins from their cold, dead hands; and husbands can’t help interjecting and sometimes bolstering the very stereotypes their wives combat.

It’s the kind of story that would make a lot more people angry if the gender roles were reversed. We’re quick to side with the players’ association whenever a collective bargaining agreement hits the table because we know what they put themselves through to line their owners’ pockets. Why then don’t these women deserve that same allegiance? The simple answer is of course because they’re women. I see it so often now in these documentaries—white women rejecting the label “feminist” with disgust because of how men define the word only to embrace it upon discovering its true purpose. It’s men who have sexualized cheerleading and made it taboo by flippantly equating it to sex work when compensated. “Tackles take talent, high-kicks don’t.” Let’s see them do either.