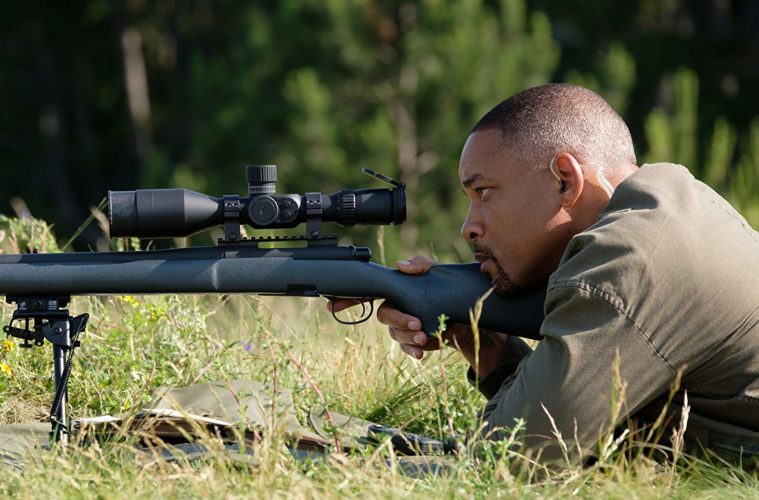 The Oscar-garlanded pairing of Eddie Redmayne and Felicity Jones reteam five years after The Theory of Everything for The Aeronauts, an adventurous family-friendly slice of Victorian nostalgia about the exploits of plucky balloonists who risk all for the pursuit of science. In 1862 London, Redmayne again plays a scientist in his awkward-quirky puppy-dog face vein as a forerunner meteorologist James Glaisher whose climatological predictions he says can only be checked high up in the air. Jones is his erstwhile sidekick Amelia Wren, but being the only pilot of the pair, it’s quickly established that she’s the one in charge. Both are victims of people who lord over them, James because of the old white men who dismiss his avant-guard experiments, and Amelia because of her sex. – Ed F. (full review)

The Day Shall Come (Chris Morris)

Allegedly based upon a hundred true stories, The Day Shall Come, directed by Chris Morris (Four Lions), is another comedy satirizing the theatrics involved in the theater of war–this war, of course, is the War on Terror. This is difficult material to farm laughs from and the film is only marginally successful at showing the absurdity of a sting where competing organizations waste resources frying small fish that otherwise may be harmless. If you’ve seen the compelling HBO documentary The Newburgh Sting, which chronicled an FBI probe to entrap three low-intelligence men and radicalize them so that politicians on both sides of the aisle could have a talking point, The Day Shall Come will feel like a less effective way to tell this story. – John F. (full review)

Ang Lee continues to push the boundaries of cinema. An ostensibly simple narrative, of an aging hitman evading a younger clone of himself, is rife with provocative symbolism surrounding the ways in which new technology has radically altered our relationships with time, space, and ourselves by blurring the lines between the real and the virtual. Armed with high-frame-rate cameras and a uniquely advanced CGI reproduction of one of the most charismatic actors alive, Lee expands the affective capacity of new digital technology and puts it all on display in an immersive viewing experience beyond the scope of human perception. Lee, in invoking this definitive alienation, highlights the “real” characters’ numbness towards their experiences or actions, radically reframing the emotional legwork around a set of digitally generated pixels and proving his humanity in turn. This, paired with some of the most inventive and well-realized action choreography of the year, recalls the ways in which early cinema technology was likened to magic acts. Gemini Man and the way in which it has been critically maligned indicates a potential changing of the guard; of all the films made this year for mainstream consumption, none are as singular as this. – Jason O.

We’ve devoured the land of our planet in an effort to call it our home. We’ve pulled the resources from her body, filled her oceans with litter, and damaged her atmosphere all in the foolish assumption that it was ours to do with as we pleased. We are small, and the Earth is not ours. She will outlive all of us, and we’ll merely be a fairy tale, a blip on her history. Most movies don’t reckon with the older, more mythical stance we held with nature in generations past, but Nietzchka Keene’s The Juniper Tree does. Shot on black-and-white 35mm, her 1990 picture charts the story of a ruptured family trying to gain some semblance of peace in an environment infused with mystical renderings of ghosts, witches, and moral curses acting as karmic gods. – Willow M. (full review)

“The words to pop songs are about the only literature of advice we have on romantic matters,” said an uptight yuppie struggling with matters of the heart in Whit Stillman’s romantic comedy Barcelona. For those seeking the deeper meanings of the universe free from pretense there’s always been The Boss. The directorial debut of Bruce Springsteen, Western Stars is a lovely companion to Gurinder Chadha’s late summer crowd-pleaser Blinded By The Light, as the poet laureate of the Garden State generously shares the images and inspirations behind his latest album. Blinded By The Light beautifully brought to life the lyrics of his earlier career, while Western Stars is a stirring and often heartbreakingly beautiful emotional journey of an artist who can still deliver the goods. – John F. (full review)