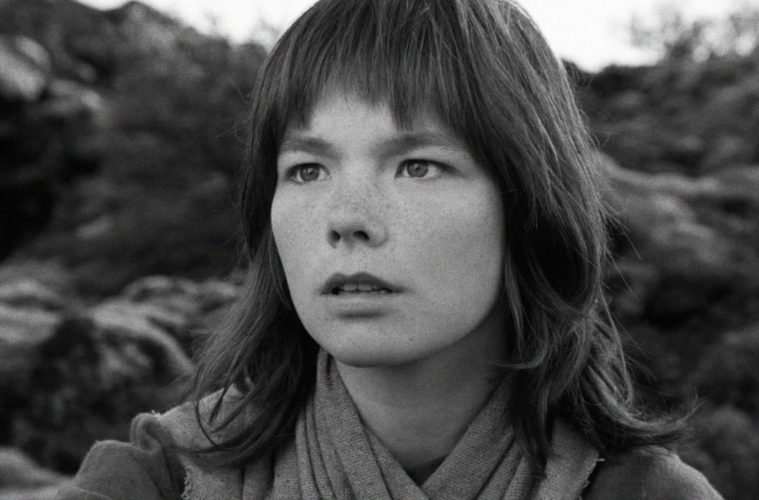 We’ve devoured the land of our planet in an effort to call it our home. We’ve pulled the resources from her body, filled her oceans with litter, and damaged her atmosphere all in the foolish assumption that it was ours to do with as we pleased. We are small, and the Earth is not ours. She will outlive all of us, and we’ll merely be a fairy tale, a blip on her history. Most movies don’t reckon with the older, more mythical stance we held with nature in generations past, but Nietzchka Keene’s The Juniper Tree does. Shot on black-and-white 35mm, her 1990 picture charts the story of a ruptured family trying to gain some semblance of peace in an environment infused with mystical renderings of ghosts, witches, and moral curses acting as karmic gods.

The Juniper Tree takes its DNA from the Grimm Fairy Tale of the same name while ushering in new elements that stand apart from other adaptations or reflections. Its narrative bones are essentially the same: a father and son struggling in the wake of the mother’s death, a remarriage, and tension between the new mother and step-son. Keene smartly realizes that the cinematographic identity should be kin with Ingmar Bergman. Its visual language is built upon nature: the rough, hilly environments, sweeping waterfalls, and run-down shacks made of rocks and straw recall the same sensibility found when Max Von Sydow would encounter Death in The Seventh Seal–which is to say she understands The Juniper Tree must have death in its blood because her cinematic national identity demands it, much like the nature of Grimm Fairy Tales.

It all begins with a sunken witch and two sisters. Margit, played by soon to be mega-star Björk Guðmundsdóttir, and her elder sister Katla (Bryndis Petra Bragadóttir), discover the dead body of their mother (Guðrún Gísladóttir), who has been murdered due to allegations of witchcraft. The image of the dead woman floating in the peaceful harbor of a creek bed perfectly conveys how Keene will juggle naturalism and mysticism: she insists the image is otherworldy by later asserting that these women do have spell-crafting powers through a relationship with nature, which extends the creek into something more. By immediately gesturing towards the mystical, her film becomes larger than it actually is and opens it up to genre settings where anything could realistically happen. Realism is only applied through the smallness of our relationship to nature and the ways in which these two women bend to the Earth. After discovering their dead mother, they flee town and Katia begins to seduce Johann (Valdimar Örn Flygenring), a much older man grieving the loss of his wife. While Johann quickly falls for Katia, his son, Jónas (Geirlaug Sunna Þormar), doesn’t warm up to the young woman and resents her for trying to take the place of his mother.

What follows is essentially the plotting of the fairy tale, but twisted under the weight of Northern European aesthetics. The most interesting dynamic, however, lies in the debut film performance of a young Björk and how it ties into her subsequent career. When musicians turn to acting, they tend to run far away from their musical personae or aesthetic in hopes to prove themselves as “real” performers. Justin Timberlake, Cher, and Will Smith are a few, but typically the best examples arise from musicians willing to mesh their musical identity and their film presence into one image. Björk does so beautifully in The Juniper Tree, her most notorious performance in Lars von Trier’s Dancer in the Dark, and in her music videos. Her acting all comes from the same primal place as her music, and even though it has evolved over the years into a meshing of technological and mystical, her identity in the late ’80s and early ’90s stems from a real place of nature.

Her voice, when really reaching for the heavens, could pierce the sky, but she can be gentle enough to pass for a bird. The dexterity of this voice comes through in her acting, and it is a tool Björk uses to convey emotion. In The Juniper Tree, her rendering of the younger sister Margit is thoughtfully in tune with all the creatures of God’s earth. Margit can understand the birds, and Björk spends a vast majority of the film singing along, not so much conveying what’s needed through dialogue but in how her voice lilts in song. Keene separates her from the other characters through visions, and with the work of primitive special effects, Margit can unlock something supernatural that the other characters cannot. When she sees her dead mother revisit her in one scene, she sings gently, and suddenly her mother has a hole in her chest, reminiscent of some effects in Twin Peaks: The Return, and she sticks her hand through. Her mother smiles. One gets the sense that Margit knows something we cannot comprehend–the same feeling evoked by Björk’s music. She’s in touch with something only she can grasp.

These stronger elements of The Juniper Tree mostly render the films more difficult, slower passages less worrisome. It would be foolish to call this “slow cinema,” but it occasionally plays as such, and even a 78-minute runtime feels overlong. Björk’s co-stars struggle to carry the same presence: while they do an adequate job telling this classic story of karma, they cannot command the same attention Björk does through voice. Seeing an early example of this developing artist’s alien abilities is enough reason to recommend the film, but doesn’t make the entire thing completely worthwhile. A smart filmmaker though Keene may be, with a real understanding of what she wants to do with the camera and the form, The Juniper Tree ultimately boils down to whether or not you can fall under the trance of its mysticism and how much you appreciate the artistry of Björk. Fortunately, I take interest in both.

A restoration of The Juniper Tree opens at Metrograph on March 15.