BFI London Review: ‘The Aeronauts’ is an Adventurous Family-Friendly Slice of Victorian Nostalgia 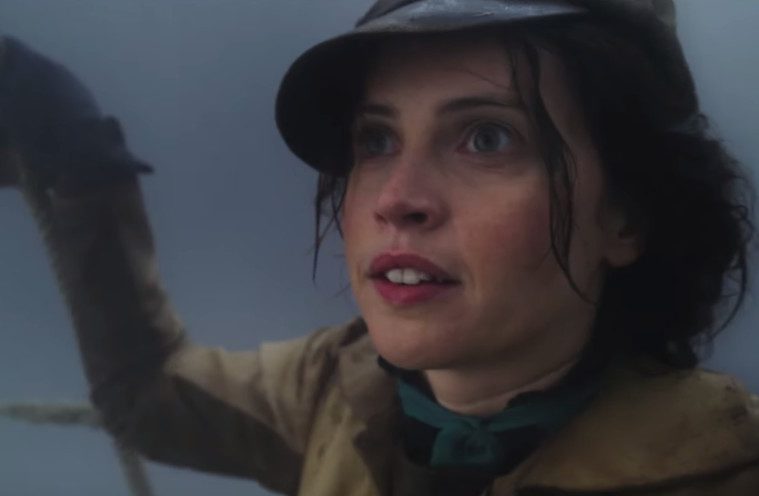 The Oscar-garlanded pairing of Eddie Redmayne and Felicity Jones reteam five years after The Theory of Everything for The Aeronauts, an adventurous family-friendly slice of Victorian nostalgia about the exploits of plucky balloonists who risk all for the pursuit of science.

In 1862 London, Redmayne again plays a scientist in his awkward-quirky puppy-dog face vein as a forerunner meteorologist James Glaisher whose climatological predictions he says can only be checked high up in the air. Jones is his erstwhile sidekick Amelia Wren, but being the only pilot of the pair, it’s quickly established that she’s the one in charge. Both are victims of people who lord over them, James because of the old white men who dismiss his avant-guard experiments, and Amelia because of her sex.

The film goes at quite a clip, with the hair-raising balloon flight itself unspooling in almost real-time. Flashbacks fill in the intermediate gaps, with Tom Courteney solidly cast as James’s father, the man who fomented his son’s desire to pursue science, falling away into old-age dementia. Hamish Patel, recently seen as the lead in Danny Boyle’s Beatles musical Yesterday, provides good humor as Glaisher’s fellow scientist John Trew.

The aerial sequences have eye-popping clarity as Glacier and Wren climb further into the skies, though that perhaps shouldn’t be in doubt with an $80 million budget (fronted by Amazon) in what otherwise is a middle-ranking British period drama. Still, no expense is spared on steampunk period Victorian features that land somewhere between English prestige drama and Disney-fied visuals of something like Mary Poppins.

On the filmmaking side, Tom Harper’s camera isn’t afraid to get inside the claustrophobic–or maybe that’s agoraphobic–confines of the balloon basket. He’s much happier to use handheld photography than stately shots more signature of the genre. It’s perhaps down to Harper’s pedigree: he’s directed both refined dramas– the BBC’s War and Peace –and more down-to-earth dramatic fare like 2018’s Wild Rose. Like that movie, The Aeronauts focuses on its female lead as Redmayne’s character retreats into the background for much of the last act, and Jones especially gets her hands dirty as the balloon flight takes ever more dangerous turns. In particular, a hair-raising scene in which Amelia must climb to the top of the balloon while at 30,000 feet looks like a lower-altitude version of Sandra Bullock’s endeavors in Gravity. Of course, Jones’s Hollywood looks aren’t abandoned, her hair glistening with neatly perfect icicles as the temperatures fall below zero degrees Fahrenheit.

Based on a non-fiction book by Richard Holmes, this is a film that blends facts and fiction, and it’s through the changes that the film should be viewed and interpreted. Jones’s Amelia (named, presumably after Earhart) is a fictional replacement for a white male that really piloted Glaisher’s ascent, which broke the world flight altitude record, and her presence is a sort-of wish-fulfillment on the part of the filmmakers. This is a movie about breaking through invisible glass ceilings, headed by a go-getting young woman following her own pursuits, in a crowd-pleasing yarn headed by a role model for children to look up to.

The Aeronauts screened at BFI London Film Festival and opens on December 6 in theaters and on December 20 on Amazon Prime Video.