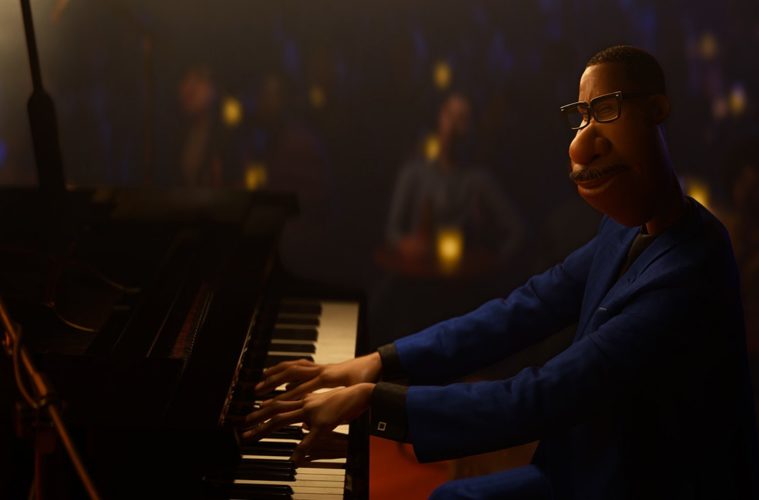 Pixar’s Soul will be celebrated for many things, but chief among them should be the platform it gives, in American animation, to the great art form of jazz. We have come a long way from Jerry Seinfeld in Bee Movie, voicing a bee named Barry B. Benson, trying to woo a human character by inquiring, “Ya like jazz?”

Soul likes jazz very much. That’s a rare certainty in this ambitious film, which attempts to contemplate nothing less than the root of all human experience on this planet. It’s directed by Pete Docter, making his fourth feature for the famed animation house, who holds perhaps the best batting average of all the Pixar regulars. Monsters Inc. and Up in the 00s, and Inside Out in the last decade are benchmarks not just of the medium of animation, but also of imaginative storytelling in art meant for mass consumption. The opening ten minutes of Up in continues to be an example of concise, emotional storytelling; Inside Out has been acclaimed by the psychology community as a plausible analogy for our mental inner workings.

The working title for Inside Out was The Untitled Pixar Movie That Takes You Inside The Mind. In a similar high-concept precis, Soul is the Pixar movie that unveils the mortal soul of a middle-aged, semi-successful African American jazz musician. Joe Gardner (voiced beautifully by Jamie Foxx), is a bumbler, striver, and a dreamer––a typical New Yorker high on his proximity to the cultural elite, even if he’s not always welcome there. The opening sequence shows him coaching a middle-school big band with all of the vim and enthusiasm of Jack Black in School of Rock, and none of the misplaced aggression of J.K. Simmons in Whiplash. But this straight-and-narrow life pathway is upended when his former student Curley (Ahmir “Questlove” Thompson in a self-referential turn), offers him an impromptu gig sitting in with the legendary saxophonist Dorothea Williams (Angela Bassett).

This film is laden with other cinematic hat-tips, and in a breakthrough for Pixar, a wider frame of reference to history, culture, and especially religion. In blocking reminiscent to Albert Brooks’ Defending Your Life, Joe then suffers a near-death experience that whisks him to a fantastical afterlife where the fate of his soul will be determined. Represented here as a light-blue blob with some of his prior facial features, he traverses what is known in the film as The Great Before, a way station where souls are formed and prepare to make the journey into their human vessels.

Soul still maintains the classic Pixar buddy trope, as Joe is paired up with ’22’ (Tina Fey), named for her place in this spirit world’s administrative ledger, a sprightly soul designed with rosy cheeks, who is reluctant to travel to Earth and assume corporeal form. Joe realizes that 22 holds the key to his return, made urgent by the sudden opportunity to fulfill his musical passions.

It appears at this stage in the story that we’ll leave the beautifully rendered New York behind, to stay in this more sterile landscape of loping blue hills and white domes. But then, an unexpected development unites these two domains in a hilarious, disorienting way, and the film finds a new gear of manic invention. The musical score is altogether essential as we find our bearings: Jazz composer Jon Batiste is responsible for the New York scenes, whilst Trent Reznor and Atticus Ross contribute an all-electronic score for the unearthly realm. Reznor himself has now gone from making industrial noise music with Nine Inch Nails to working on a film premiering on Disney+, excelling at both; may we all grow into maturity as gracefully.

A reservation often aired towards Inside Out was about its basis in reality, or how it went about characterizing the emotions we all feel. Really, it attempted to demystify the intangible processes of memory and consciousness, carefully laying out each explained concept like a jaunty science lecturer eager we don’t miss a beat. Soul bests this aspect of the film, by focusing on something far more hypothetical. Any thinking on, to paraphrase DJ Shadow, what a soul looks like, is a more poetic endeavour, specific to everyone with their individuality and varied backgrounds. The production consulted with religious leaders––rabbis, priests, and New Age thinkers––to give their own speculations weight, and the results allow greater room for audiences (especially mature ones) to ponder, sometimes in a state of awed confusion.

To return to jazz, what does feel beyond reproach is the film’s understanding of that music, which in reality often cultivates an elite air. The sequences of Joe riffing on piano off the other instruments, wandering into unknown improvisatory space, are some of the most touching in Pixar’s canon. His outline ascends from its surroundings (but not into the soul world), and the background ebbs away; a purplish, cosmic glow surrounds Joe’s body. For old millennials especially, this is what watching Pixar films themselves used to feel like, and Soul comes closer than most in returning us there.

Soul premiered at BFI London Film Festival and arrives on Disney+ on December 25.