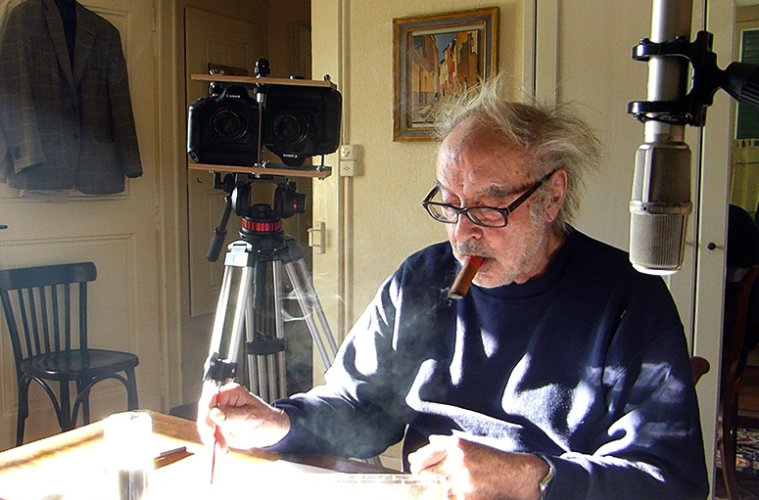 No in-development film casts a shadow quite like Jean-Luc Godard‘s Image et Parole, which would still be a major point of focus if it wasn’t the follow-up to one of this decade’s finest works. (And if he wasn’t perhaps the greatest living filmmaker, and if he wasn’t on quite the roll as of late, and, and, and…) Word has been awfully slim, merely ranging from a 2014 notice that he was “already hard at work on a new project” and, earlier this year, Cannes President Thierry Frémaux telling us the man had “just started shooting his next film.”

It turns out that was, fortunately, inaccurate: Wild Bunch’s Vincent Maraval told Screen Daily that Godard has been in production “for nearly two years now” across Arab nations, in turn revealing the picture serves as “a reflection on the Arab world today among other subjects” through a mix of fact and fiction. Being that just about everything Godard’s touched could be described as “a reflection on [thing] among other subjects” through a mix of fact and fiction, I doubt any of us will consider this update a truly solid image of what’s to come. But at least it might come before long: Wild Bunch hoped to have it prepared for next year’s Cannes Film Festival; and while it won’t be, a window of five-or-so months even being considered feasible could (read: could) be taken as some affirmation.

Thanks to an interview conducted this summer, and just posted to the Russian publication Seance (via Keyframe), those who’ve got a decent grasp of the Cyrillic alphabet can still catch up with Godard. He here expands on Image et Parole, and though the translation is a bit rough, one might find interest in what’s been stated:

“I’m doing a very long introduction. As if, before going to see the whole hand, we must consider each finger individually. So, I give the first five elements: the war, travel, the law (as Montesquieu, The Spirit of Laws) … some other and the latter is called Central Region, in memory of one of American underground films — and then It has gone hand. This little story, I borrowed from one uninteresting books and entitled as Happy Arabia — this epithet travelers of the XIX century (such as Alexandre Dumas) awarded today the poverty-stricken region, the Middle East. The action takes place in one of the local countries where there are oil; people are satisfied with this state of affairs, but their ruler wants to rule over the other Arab countries. He devises of pseudo, which eventually fails, and everything is back to normal. I shoot without actors, they do not need me here. But there is a storyteller, if read out excerpts from the book, and we broadly understand the story, which is a kind of parable.”

That wonkiness actually proves rather amusing when we get to Michel Hazanavicius’ Louis Garrel-led biopic, Redoubtable, about which Godard (more or less) says, “Oh, to even hear about it do not want to! I do not like it. Although, in fact, do not care. Stupid idea, stupid.”

I’d say “never change,” but, good Lord, the man just turned 86 and shows no signs of slowing down. I hope he isn’t even close to done.