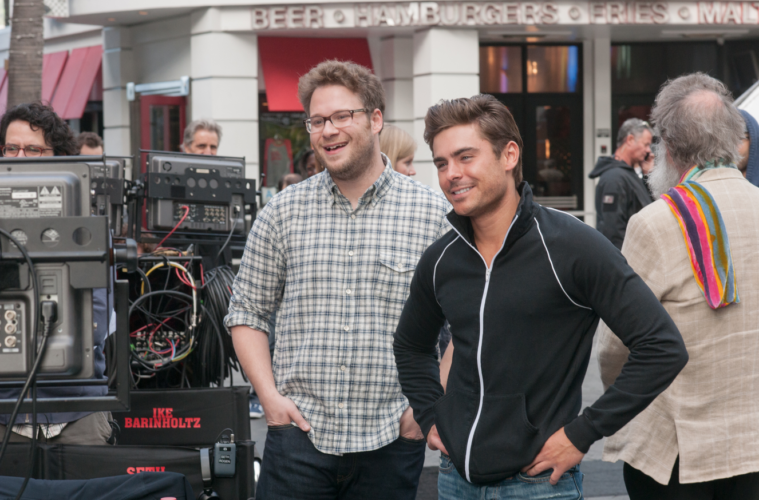 Arriving in theaters this weekend is the first major comedy of the summer, Nicholas Stoller‘s Neighbors, which finds family man Seth Rogen and frat boy Zac Efron at total war. It takes a team to pull off the laughs in a production such as this and two of the most integral parts are producers Evan Goldberg and James Weaver.

We recently had a chance to sit down for an interview with the pair, where they discussed some hazing on set, the original opening, how they pull off the craziness in their films, achieving global appeal, autobiographical elements in their work, their upcoming films The Interview and Sausage Party, and much more. Check out the full conversation below.

The Film Stage: Can you talk about bringing on new cast members who are not usually in comedies like Neighbors? For Zac Efron, Craig Roberts, what’s that process like getting them in the rhythm or cadence of that kind of comedy?

Evan Goldberg: There was no process. Everyone just came and understood. We let everybody know that this movie is so cheap that you can do anything and that’s there’s no-holds-barred. Everyone should go ballistic. In the pre-filming meetings, once we acquired the cast we wanted, it was evident when we were fitting Christopher Mintz-Plasse for a 13-inch dick, and working on an erection rig for Dave Franco, and telling Craig [Roberts] we’re going to literally haze him for a day.

James Weaver: That was crazy. We actually just hazed him. It was for a movie and it was legal but we hazed the shit out of him.

Goldberg: I put him in a dark room and had a strobe light going, I had people bang pots and pans over his head for ten minutes, he almost freaked out there. Anyone would have. That was Zero Dark Thirty shit.

Weaver: That one was wrong. That was just for our own entertainment.

Goldberg: The original intro to the movie was that Zac [Efron] goes through the frat getting everybody because they’re in a race to beat another frat so they can get a bunch of fireworks from them. He goes and Chris Mintz-Plasse is jerking off, Jerrod Carmichael is on special K and can’t move, Dave Franco is studying, and then Craig, Assjuice, is duck-taped way up on the wall and Zac just ripped off the wall and slammed him on the ground. And then Craig was forced to fall down a staircase.

This insanity is a recurring theme to your films. How do you create an environment where these actors show up and do bat-shit crazy things? In This is The End, for instance, you have Michael Cera playing a coke-head.

Goldberg: With Michael, it was like, “do you want to come and do this role?” And he was like, “sure!” He showed up and we were going to do the scene where he’s getting blown and getting his ass eaten and he was like, “can I wear my windbreaker?” And we were like, “no, we don’t like the windbreaker. It’s too colorful it makes you look like a kid.” He was like, “I’ll do everything, just let me wear this windbreaker.” And that windbreaker is a comedic element. He was right. One of the big things is we just make bigger fools of ourselves than others. At parties I end up with my shirt off screaming a lot of the time, they kind of know me as a buffoon, and they’ve all seen Seth do dumb stuff. Weaver has had his fair share. He banged up his eye…

Weaver: At the Neighbors premiere I got drunk and had a grand old time and ended up with a black eye.

Goldberg: It’s a big difference from most producers who try to be fancy fucks, and we are like no, we’re fucking dumb but we’re on top of our shit.

What’s your own experiences with fraternities and what do you believe this film’s outlook on frat life is?

Weaver: I was in a fraternity, and I think, I was the president of my fraternity, and it had that classic thing about it. It was really fun, we partied too much. Zac reminded me, when we conceived the movie we thought of the frat guys as the bad guys and Seth and his wife are the good guys who will overcome them. Zac brought it back and said we got to make sure this movie is for frat guys too, which is ironic he had to say that to me, but he’s 100% right. We captured it in a lot in the script and a lot in the casting. You love Dave, you love Jerrod, you love Chris, and you love Zac, and you love them together. And they’re good to each other until narratively we need them not to be. I think that’s the biggest thing — we embraced what they’re doing and what they’re going through is valid and true for them even if it totally fucks with Seth and Rose’s character. And how much of that is discovered in post-production or test screenings?

Weaver: I remember Nicholas Stoller very smartly during filming was like these frat guys are really likable. This is going to be an interesting part of the movie because you want to spend time with them. In post, the biggest choice we made was to keep the point of view through Seth and Rose’s character. That intro scene Evan was talking about, we got rid of that, and you meet that frat through Seth and Rose’s point of view.

Goldberg: So much money we could have used elsewhere.

Weaver: That drove the movie and point of view.

Golberg: Sorry to interrupt. [Evan points across to the building across the street.] There’s kids on a bouncy castle on top of that building. That’s the worst fucking idea I’ve ever seen in my life. This won’t be funny when we read the news tomorrow. Six children bounce off building.

Speaking of the director Nicholas Stoller, can you talk about his work here? What most struck me are these in-camera gags, most notably an airbag, or gags during the climatic fight scene. There’s a lot of stuff that happens in the frame.

Goldberg: A big thing we all talked about was that we wanted physical comedy because we don’t want to make a movie that only plays in America. We were determined to make a movie that plays everywhere. At first, well we can’t do that it’s about a frat. But frats are something that internationally, people find fascinating, because people are like “Those crazy Americans.” I’m very proud of Superbad, but internationally, it didn’t destroy, same thing with Pineapple Express, but This is the End did better than those movies, because it had physical gags — people getting hit with bats and falling down stairs. And in frat houses people are riding bicycles down staircases and throwing knifes into a dartboard, they drew on the wall with paint. They’re doing crazy physical gags.

Weaver: In Neighbors, you could do it for the sake of the gag. That was so fun. When we’re making our other comedies it’s supposed to be part of the narrative, justify the story or the character. In a fraternity if a guy needs to bounce down a staircase on an exercise ball that’s fine. The genre of this film allowed for that. Nic does have a particularly good sensibility for that stuff.

Goldberg: If you watch his old movies, there’s a lot of physical gags.

Weaver: In general, our company Point Grey’s mantra is to find movies that speak to the time of our lives we’re in. Every movie we’re trying to make has some reliability. This is the End is a great example. That was a period of time as Seth and Evan make their way in Hollywood and trying to figure out how we’re going to relate to our Canadian friends.

Goldberg: The stuff with Jay [Baruchel] and Seth, we didn’t make any of that up. Jay loves to live in Canada. Seth loves to live here and has more Hollywood friends. We just did a movie about a family with a kid and now we’re talking about where we’re at our in our lives. We haven’t made a movie about careers. Why would we write a movie that we aren’t living? We stick to what we know.

Is the hope to bring in new audiences? You were talking about Neighbors appealing on a global scale.

Goldberg: Every film, in our minds, should do better than the ones before.

Weaver: And that’s just blind crazy ambition which we have.

Goldberg: As producers, we are very much aware that we are trying to expand our audiences. We have this other movie coming called The Interview, which is about an international threat which we think will be relatable to other people and involves North Korea and America. We think that will be another rung up on the ladder of international appeal. We have this other movie called Sausage Party which is a CG movie and with CG you can put in voices from other countries. You can put in the top German actor doing it in German. If one of our movies doesn’t do as well internationally as our others, we’ve failed.