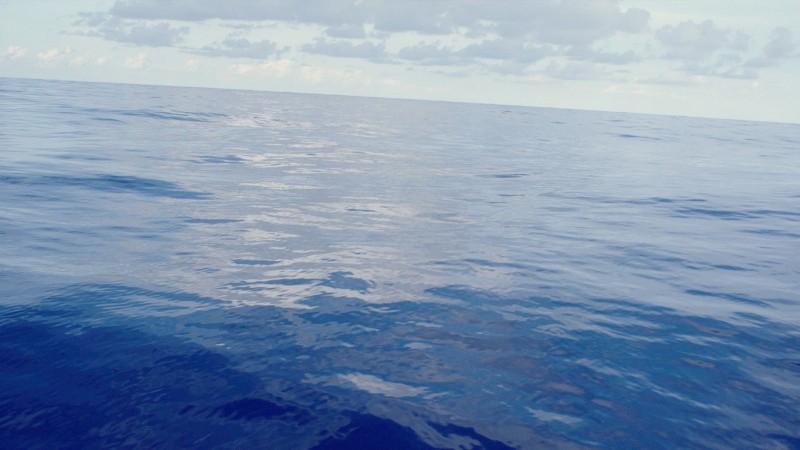 A few minutes into Helena Wittmann’s Drift, two young ladies sit at a bar and recount an old myth from Papua New Guinea. It’s an anecdote of the world’s creation. Back when the Earth was a single primeval ocean, a giant crocodile would paddle back and forth around the planet, preventing the sand to settle. But when a man arrived and killed the beast, the paddling ceased, the sand started to densify, so the land and sea came into being – and that’s why the world is the way it is today.

It is a brief exchange that would have probably gone unnoticed were it not for Wittmann’s verbally parsimonious script. Possibly the longest dialogue between the two Hamburg-stranded girlfriends, Josefina (Josefina Gill) and Theresa (anthropologist and Wittmann’s collaborator Theresa George), it introduces the two elements around which Wittmann’s debut feature gravitates – earth and water – and predates the event that sets the plot in motion: a journey through sea.

Not that Drift has a thick plot to kick-start. Conceived in collaboration with Theresa George and directed, shot and edited by Wittmann herself, it unfolds like a multisensorial meditation more akin to the work of the Harvard Sensory Ethnography Lab power couple Véréna Paravel and Lucien Castaing-Taylor (recall their 2012 seminal Leviathan) than a standard three-act fiction feature.

When we first meet them, Josefina and Theresa are about to part ways. The former is returning to her native Argentina, while the latter is embarking for a solo expedition across the Atlantic, a journey aboard a ship that will take her from the Caribbean all the way back to Europe. We do not know what drives Theresa to spend a few weeks at sea, nor do we know what the relationship between the two girls really involves. They spend mornings in bed together, plan and pack for their respective trips, fantasize over ways to keep in touch and walk on the beach in the dead of night (quiet routines reminiscent of Hong Sang-soo’s Hamburg-set On The Beach at Night Alone, as is the lonesome, autumnal aura that exudes from Drift’s dry-land prologue).

Perceptively, Wittmann’s lensing mirrors the journey’s transition from solid to liquid form. The couple’s last few days in Hamburg are filmed through judiciously designed static and often extreme wide shots, giving the eye ample time to take in the characters entering and leaving the scene – an attention to detail and subtle sense of wonder that may remind Abbas Kiarostami’s acolytes of the Iranian’s posthumous 24 Frames. But as Theresa sails away, images come loose, and the narrative framework loses all temporal and spatial references. We see her sleep in a cabin, wander on the ship’s deck, jot down some notes on a journal, but the camera gradually turns its focus to the open sea, letting the ocean enter and fill the shot in its majestic, whimsical entirety. The screen becomes water, day becomes night, then day again. As the camera follows the boat’s swaying, Drift enters a state of aqueous trance. Objects disappear; the horizon itself sinks under the ocean’s all-encompassing embrace, while Nika Breithaupt’s sound design adds to the sense of awe through a mix of open sea recordings and synthesizer-based electronic compositions.

For over a half hour, as Theresa makes her silent journey across the Atlantic, this is everything Drift has to offer – and it is plenty. While some may shrug at its slow pace, wordless narration and sea-sickening lulling camerawork, Wittmann’s debut is a visually entrancing, one-of-a-kind experience. Watching the water flood the screen as the camera perches atop the ship’s deck, the lens leaning dangerously above the water, Drift conjures up a feeling at once frightening and soothing: the fear of falling into an abyss of inscrutable depth and the urge to dive back into its primordial, amniotic liquid.

Wittmann’s work defies traditional movie-going experience because it demands a lot more attention – and patience – from viewers than more linear and less experimental works would do. But it is also a far more rewarding watch. It belongs to a microcosm of art-house multisensorial features drawing their inspiration from the unfathomable mysteries of the sea – a body of work that finds its origins in millennia-old storytelling practices. In that, it is more traditional than its experimental nature may give away. But in a cinematic universe where quiet-paced pleasures are often sacrificed in the name of louder, faster, higher-stimulus action-packed entertainment, it is delightfully rebellious.