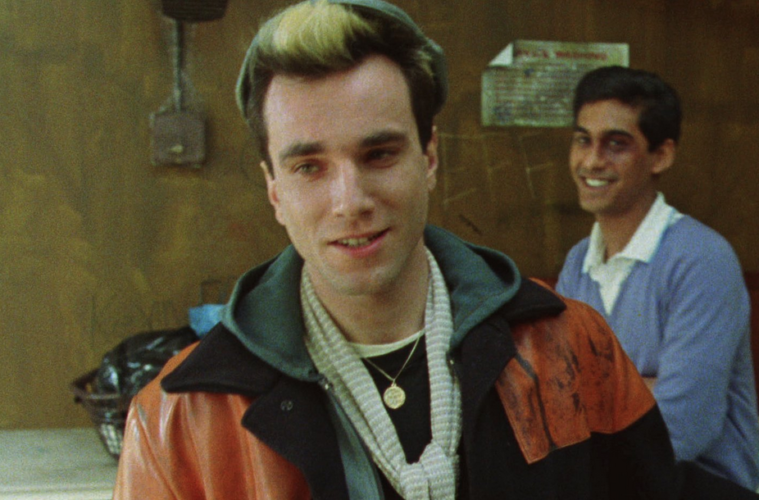 ‘My Beautiful Laundrette’ Hits Criterion: The Boundary-Pushing Gay Romances of 1985

Johnny licks Omar’s neck. He’s got some blue paint on his face from decorating the front of the launderette. The two men stand in front of the building, which Omar manages. Johnny’s friends, a batch of rabidly racist skinheads, stand awkwardly nearby. Yet Johnny doesn’t care. The chemistry between the two seems to be guarded by a blissful force field, magically keeping the bitter cold of Thatcherite antisociety at bay. In its place there are only frisky smiles.

Narratively, of course, Johnny and Omar don’t necessarily have it so easy. Omar is managing the launderette on behalf of his wealthy uncle, Nasser (Saeed Jeffrey), who is determined to educate his nephew in the ways of business and then marry him off to his daughter, Tania (Rita Wolf). Omar’s father (Roshan Seth) is an alcoholic whose greatest disappointment was witnessing a group of Omar’s old grade-school friends, including Johnny, march in a National Front demonstration, chanting along with its racist, anti-immigrant slogans.

The film begins years after this political shock, which ended Omar and Johnny’s friendship. The two meet once again in a dark underpass somewhere in South London, Omar recognizing Johnny amongst the skinheads that have attacked his cousin Selim’s car. Omar is caught in the midst of a violent clash that’s symptomatic of a tortured Britain. Yet he comes across as blissfully ignorant of the tension and walks over to Johnny with a big grin on his face. Their friendship seems instantly rekindled, and, a few scenes later, they share the film’s first kiss. Despite the national mood, all this feels about as tortured as a bright spring day.

Such an assertion of gay romance would hardly seem revolutionary today, of course, following decades of groundbreaking queer cinema both artistically and financially successful. But this was 1985, years before the cultural breakthroughs of the 1990s and the legal victories of the 21st century. Homosexuality in the United Kingdom had only been completely decriminalized in 1982. More than half of the United States still had sodomy laws on the books. And this is all in the terrible context of the AIDS epidemic, which had begun to intensify. Rock Hudson’s illness became public on June 21st, 1985, and he died on October 2nd. Both the Thatcher and Reagan administrations would double down on their decision to ignore the problem.

Yet in spite of such dire circumstances and the political frustrations of a conservative decade on both sides of the Atlantic, a handful of warm and inspiring gay romances arrived in short succession. My Beautiful Laundrette had its premiere on August 18th at the Edinburgh International Film Festival, later opening in the U.K. on November 16, 1985 and the U.S. on March 7th, 1986. Donna Deitch’s Desert Hearts opened in New York on that very same day, after a premiere at the Toronto International Film Festival the previous September.

Deitch’s adaptation of Jane Rule’s famed lesbian novel is a perfect twin film for Frears’s meditation on contemporary British prejudices regarding class and race, even though its synopsis has more in common with George Cukor’s The Women. The setting is 1959. Vivian Bell, played with tremendous grace by Canadian actress Helen Shaver, is an English professor from New York City who has come to Reno for an easy divorce. She stays at a ranch whose sole clientele are women in need of establishing Nevada residency in order to get rid of their husbands. She meets Cay (Patricia Charbonneau), the adopted daughter of the ranch’s owner. They fall in love.

The film begins with Sonnet 57. “Being your slave, what should I do but tend / Upon the hours and times of your desire?” The message is one of romance as separation from society, the choice to devote one’s life to one’s lover and thus dispense with all the rest. The queer love of Jarman’s young men floating across the screen isolates them. Sonnet 148 says it perhaps with the most clarity. “O me! What eyes hath love put in my head / Which have no correspondence with true sight!…If that be fair whereon my false eyes dote / What means the world to say it is not so?” It does not matter how others see, even if they see these lovers as abnormal outcasts. The vision of the queer and lovelorn is new sight, a perception apart.

This conjuring of new sight weaves through the three films in a number of ways. The Angelic Conversation features Paul Reynolds in a pool of water, shirtless and lit by a warm glow. Vivian and Cay first kiss after running through a sudden torrential downpour, on the shore of an unnamed lake. Johnny and Omar splash each other in the back room of the laundromat. My Beautiful Laundrette also shares with The Angelic Conversation a fondness for unusual light, the blue neon of the launderette’s sign as much a beacon of strange magic in the South London landscape as the torches that brightly shine in Jarman’s dark caves, flickering on film.

These images of light and water suggest purity, despite religious connotations of the word that are frequently used to condemn queer love. The launderette is a place of cleanliness, the caves of The Angelic Conversation a locale of deep and organic earth, and the Nevada desert of Desert Hearts a landscape of tremendous natural wonder. Taken together, they are almost alchemical, a trilogy of elemental concoctions that naturalize and sanctify queer affection.

And then there’s all of the smiling. Omar’s full, beaming grin is part and parcel of his overwhelming optimism, even as he boldly displays intimate affection for Johnny in front of his inevitably disapproving family. “Eyelash,” he says, as he reaches up and brushes Johnny’s cheek while his uncle looks on, not a care in the world. Johnny, on the other hand, has an irrepressible smirk. It’s naughtier and perhaps more worldly than Omar’s, but equally gleaming with a love that has little interest in letting the world intrude. The same resilient joy shines out from Desert Hearts, particularly its final act. Cay essentially teaches Vivian how to smile, winning her over with a smirk that isn’t far from Johnny’s.

Jarman was especially fond of the smile. In one of his memoirs he refers to what he calls an “archaic smile,” a lingering “romance in the camera” that he saw in his own work, as well as that of Pier Paolo Pasolini. The Angelic Conversation is like a masterclass on this one effect, with its time-traveling images, gushing Shakespearean romance and beautiful men in the water. Yet while My Beautiful Laundrette and Desert Hearts don’t smile in quite the same way, they share the symbol.

It is an instantly recognizable proof of visceral happiness, often in close-up. The choice on the part of the filmmakers to feature smiling so prominently — as well as laughter and joy in general — is a radical act. To write a script in which gay love gets a happy ending, let alone executing it with such an insistent visual leitmotif of irrepressible joy, was bold enough in 1985.

That said, the groundbreaking character of these movies may not be obvious in today’s context. Both the U.S. and the U.K. recognize same-sex marriages (with the lingering exception of Northern Ireland). Gay relationships have been normalized by the culture and legalized by the government. A pleasant gay love story can seem like just another pleasant gay love story. For context, then, it may help to jump back to one last film from the era — one with a much bleaker picture of gay love.

If the term “gay love” even really applies, that is. Kiss of the Spider Woman is director Héctor Babenco’s adaptation of the Manuel Puig novel of the same name. William Hurt won the Best Actor Oscar for his performance just a few weeks after Desert Hearts and My Beautiful Laundrette arrived in New York City cinemas. Hurt plays a gay man in prison somewhere in South America for corruption of a minor. His cell mate, a heretofore heterosexual revolutionary played by Raúl Júlia, is a political prisoner of the dictatorship. They become friends and eventually lovers, though only for one night.

The sex is brief and hidden by darkness. Babenco shows nothing, only allowing some intimate and awkward dialog to play over the black screen. Moreover, their motivation is hardly clear. It feels as if each man is doing it out of pity for the other, each beaten down by the oppression of the prison and the state. Their connection is one of convenience and necessity, their consummation more narratively inevitable than credibly romantic. Then they both die horribly.

And so the other three films are like one of Jarman’s flaming torches in the dank political and social cave of the 1980s. Frears and Deitch cast their gay love stories in a positive light, neutralizing any source of disapproval. Their smile is invulnerable. Years before the great victories of marriage equality, they stand tall with a defiant grin and a proposal for a way of life outside of legally recognized relationships.

Marriage does exist in Desert Hearts and My Beautiful Laundrette, but its protagonists don’t seem particularly upset that they can’t access it. Nasser seems most happy with his mistress of many years, but their relationship is doomed in a way that Omar and Johnny’s is not. Cay’s friend, Silver, gets married and stays in Reno, while Cay and Vivian hop on a train and head out of town. Neither giddy straight newlyweds nor those frustrated by the enclosure of unhappy marriage are a model for these characters. The glimmering faces of The Angelic Conversation, meanwhile, seem to exist in no discernable location or time period.

And in this in-between reigns love, an elemental and buoyant queer romance that beams forth from the screen despite any and all obstacles from heteronormative society. Jarman, Frears, and Deitch were not likely addressing the gay adoption of marriage, given that it likely seemed politically inconceivable. Yet in its place they created beautiful alternate pathways that continue to shine even though they may not seem necessary anymore. Perhaps, now that marriage equality has been achieved, this unlikely trilogy can serve as renewed inspiration for a dynamic and independent approach to love.

My Beautiful Laundrette is now available through The Criterion Collection.