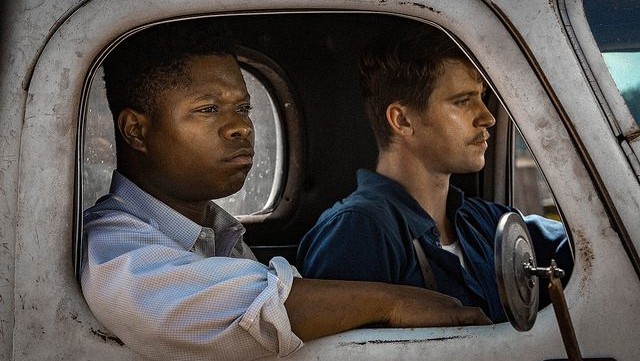 Expanding her narrative scope but still retaining a level of aesthetic intimacy, Dee Rees’ Pariah follow-up Mudbound has the old-fashioned storytelling feel of a grand American novel. Based on Hillary Jordan’s 2008 book, the story takes place during World War II, and while it shows glimpses of the horrors of war, its larger aim is concerned with the racial divide of two families in the American south. Shifting point-of-views result in the drama taking a bit to find its footing, but after the groundwork is set, Rees is able to burrow deeper into the injustices — both piercingly subtle and horrifyingly grotesque — to create a powerful exploration of cyclical racism, with a touch of hope, I noted in my review from Sundance.

With the film now set for a fall festival tour ahead of a Netflix release in November, the first trailer has landed. “This illusion of safety, the illusion of well-being … it’s sad, but we’re in danger,” Rees tells RogerEbert.com. “And if we don’t deal with our history and if we don’t deal with the truth, it’s going to happen over and over again. If we don’t admit what the system is and who Pappy is, you’re going to keep repeating those behaviors and those attitudes. And [I hope it] helps us see each other more in particular and break down this myth of us vs. them.”

Set in the rural American South during World War II, Dee Rees’ Mudbound is an epic story of two families pitted against one another by a ruthless social hierarchy, yet bound together by the shared farmland of the Mississippi Delta.

Mudbound follows the McAllan family, newly transplanted from the quiet civility of Memphis and unprepared for the harsh demands of farming. Despite the grandiose dreams of Henry (Jason Clarke), his wife Laura (Carey Mulligan) struggles to keep the faith in her husband’s losing venture. Meanwhile, Hap and Florence Jackson (Rob Morgan, Mary J. Blige) — sharecroppers who have worked the land for generations — struggle bravely to build a small dream of their own despite the rigidly enforced social barriers they face.

The war upends both families’ plans as their returning loved ones, Jamie McAllan (Garrett Hedlund) and Ronsel Jackson (Jason Mitchell), forge a fast but uneasy friendship that challenges the brutal realities of the Jim Crow South in which they live.