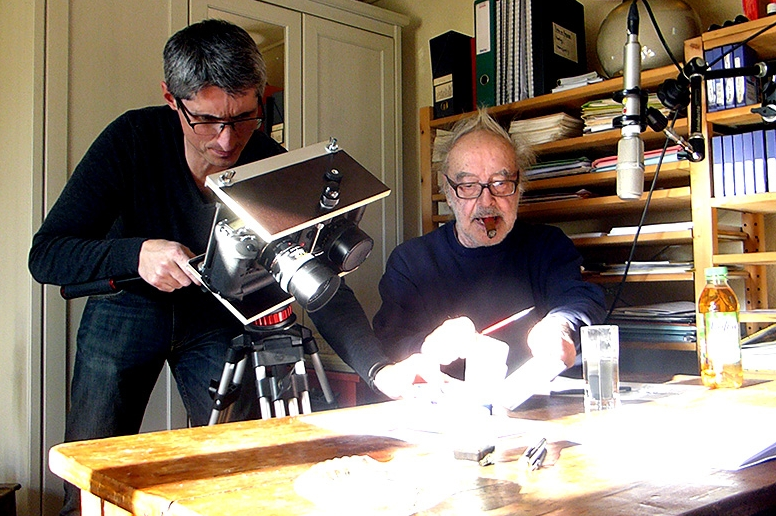 It was, of course, a shock to the cinematic system that Jean-Luc Godard—let’s see… film’s single most important living figure?—would retire after the completion of his films Funny Wars and Scenario. That it is neither unreasonable he’d retire (he’s 90) nor entirely realistic to expect both films will even come to light (he’s 90) says more or less everything.

Naturally, a new interview with Godard’s closest collaborator, cinematographer Fabrice Aragno, yielded intriguing information about the works and their progress. There’s almost too much in his interview with Variety, but let’s skip to the end: they might not be Godard’s swan song(s). Aragno is rather blunt in saying “Neither is designed to be his last film,” and whatever’s the claim now may not hold up in court over time. Or: “If it’s his last film, he’ll say it’s his last film, and then he will make some twist at the end, I think. Everyone will wait for it and then maybe he will say the contrary.”

Who the hell knows, though. (One could, for example, reasonably expect a flurry of postmortem releases that complicate the sense of then and now.) Further details in the concrete are somewhat scant, though format seems locked: Funny Wars will be recorded on 35mm, 16mm, and Super 8—35mm shot black-and-white, the other two color—while Scenario appears “more in a classic video style with some Super-8 images, not with 35mm.”

Jean-Luc told to me he wanted to come back to his origin. He said you know this Chris Marker film La Jetée? Maybe we can do something like that. If you do it in 35mm it will be accelerated, a fast forward, but if you work on computer and still play one image per second, you can enter the material of the film, of the grain, of the dust, of the truth, of the real. You won’t always have this glass of the digital where there is no origin, it’s only a copy. In 35 there is one negative, that’s it. When you work with film you have to trust people, you have to trust the laboratory, you have to be in a relationship with the others. You do some tests, you have an idea of how it will be, but you have to project yourself to what you will do with the film. In digital, you just have a button and you see the result. It’s not to say before was better, but I feel I miss this projection, this movement. I think for Jean-Luc it’s the same.

The ability for a lifelong 91-year-old smoker to actually make the thing is of paramount importance, on which subject Aragno claims Godard is “using his cerebral engine on books, on the ideas of the film, and less in the making,” with plans to test an actress after summer. Not the ideal speed, but supposedly he is “quite ready to film.” We await more.