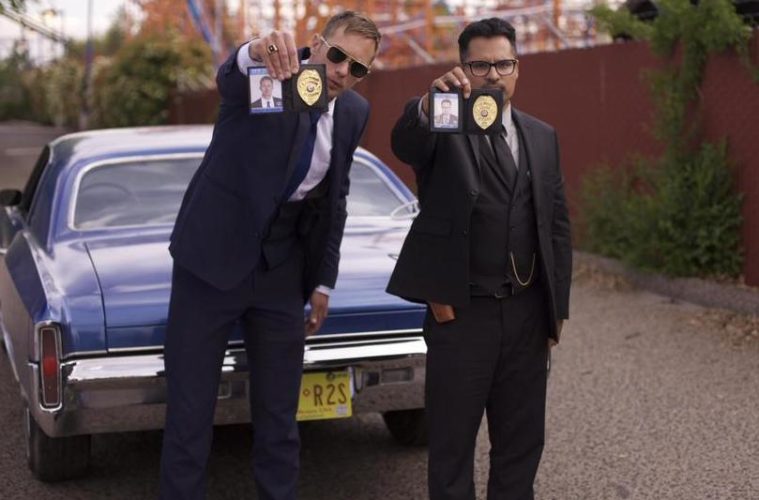 After melding action with comedy with his debut The Guard, writer-director John Michael McDonagh swayed more toward the dramatic side with his last film Calvary, but now he looks to be returning to the other direction with his third feature, War on Everyone. Starring Michael Peña and Alexander Skarsgård as two corrupt cops, it looks like a darkly hilarious comedy, thanks to the first U.K. trailer, which has now arrived this morning.

We said in our review, “Steering into the frame to the sound of ’70s rock music while giving chase in their muscle car to a fully-costumed, on-foot mime, the impeccably dressed, utterly corrupt police duo of Bob Bolaño (Michael Peña) and Terry Monroe (Alexander Skarsgård) initially appear to be running full-speed towards an even wackier version of the Starsky & Hutch movie we got in 2004. Audiences familiar with the work of director John Michael McDonagh (The Guard, Calvary), however, will know something else must be in store with War on Everyone, even if McDonagh himself has made no mystery of the slightly broader canvas he’s working on this time around.”

In Albuquerque, New Mexico, Terry Monroe (Skarsgård) and Bob Bolaño (Peña) are two corrupt cops who set out to blackmail and frame every criminal unfortunate enough to cross their path. Things take a sinister turn, however, when they try to intimidate someone who is more dangerous than they are. Or is he?

War on Everyone opens in the U.K. on September 30th and will be released by Saban Films in the United States.