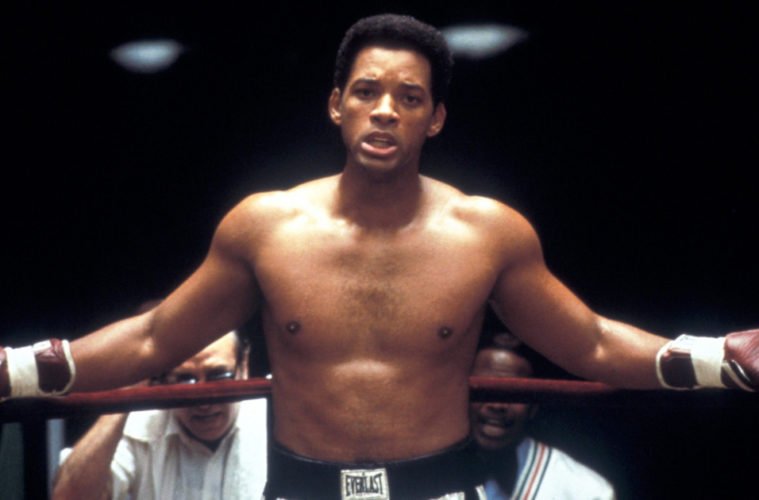 Michael Mann’s ‘Ali’ Will Return to Theaters This Weekend

In naming our favorite boxing movies last fall, we said, “Michael Mann‘s epic portrait of Muhammad Ali marvelously depicts the champ and the cultural upheaval surrounding his storied and controversial career,” adding that, “Ali is a thoughtful and aesthetically flawless picture, which succeeds in conveying the harrowing emotions the People’s Champion felt inside and outside of the ring.” Following the passing of the legendary boxer last weekend, Sony has announced the film will be returning to a few hundred theaters this weekend. While we lament some aspects of digital distribution, consider this a check in the positive column.

“When we made Ali, Will Smith dedicated a year to become Ali. No director ever had a better, more stand-up partner,” Mann tells Variety in a recent guest column. “In the early days, in one of my meetings with Ali, he said one of the most important concerns to him was that there be no idolatry. No sugarcoating. He made mistakes and he wanted all of them included. His life was his life, and he was proud of the totality of it and would not want it diminished by hagiography. That was when the serious depth and character of the man first opened up to me. It led me to ask what mistake he most regretted. It was his rejection of Malcolm X. Malcolm had been expelled from the Nation of Islam and Ali had been convinced by Elijah Muhammad to renounce his friend and mentor.”

Check out the trailer for Ali and press release about the re-release below, as well as behind-the-scenes stills, and see your local theater listings for showtimes.

Ali, the Muhammad Ali biopic starring Will Smith in one of his most memorable roles, will return to theaters this weekend, as Sony Pictures re-releases the film in limited release in homage and celebration of the life of the American legend. The film’s release will be limited to a few hundred locations nationwide.

Commenting on the announcement, Rory Bruer, president of Worldwide Distribution for Sony Pictures, said, “With the passing of Muhammad Ali, we have received many requests for this film to return to theaters, in celebration of his life. The film truly honors everything that made Ali one of the central figures of our time, a man who commanded his sport but whose personal faith and principles made him mean so much more. Muhammad Ali truly was The Greatest, and this tribute is a great way to honor him.”

The 2001 film received two Academy Awars nominations, for Best Actor for Will Smith as Ali and for Best Supporting Actor for Jon Voight as Howard Cosell.

Moviegoers can check their local listings for theater availability and showtimes.

Will Smith puts on the gloves and steps between the ropes as Ali, arguably the most fascinating personality in sports history in this biopic from Academy Award®-nominated director Michael Mann. Directed by Michael Mann, the screenplay is by Stephen J. Rivele & Christopher Wilkinson and Eric Roth & Michael Mann from a story by Gregory Allen Howard. The film is produced by Jon Peters, James Lassiter, Paul Ardaji, Michael Mann and A. Kitman Ho.