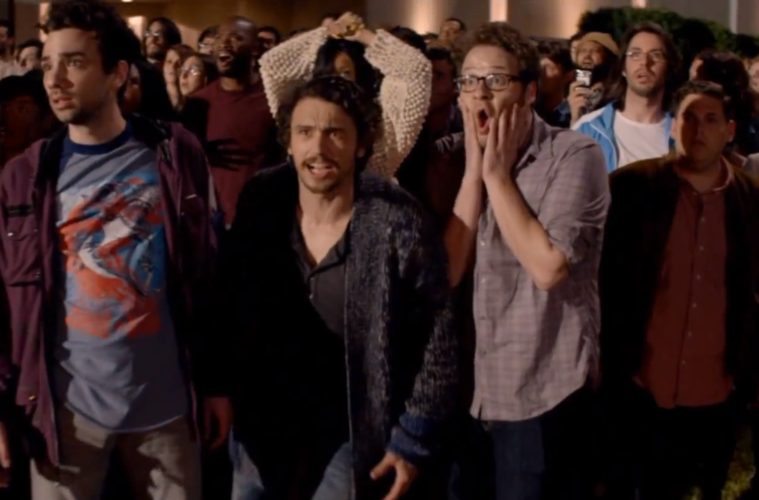 With hefty expectations, Man of Steel will be landing on June 14th, but after this new red band trailer, there’s a film we’re a touch more excited for hitting theaters the same day. Following the first red band trailer and an April Fool’s Day tease this afternoon, we’ve now got a new extended R-rated look at Seth Rogen and frequent collaborator Evan Goldberg’s directorial debut, This is The End.

Featuring a legion of celebrities attending James Franco‘s house party, the world starts to crumble around them and chaos ensues. While previous looks have hinted at some of the comedic violence, this one goes all-out (spoilers), featuring an impaled Michael Cera (after a physical confrontation with Rihanna), as well as Aziz Ansari and Jason Segel falling to their demise. Check out the mayhem below (and a new poster) for the film also starring Jay Baruchel, Jonah Hill, Emma Watson, Danny McBride, Craig Robinson, Paul Rudd, Christopher Mintz-Plasse, Martin Starr, Kevin Hart and many, many more.

Update: Check out a green band trailer, which adds a few new jokes.

The comedy This Is The End follows six friends trapped in a house after a series of strange and catastrophic events devastate Los Angeles. As the world unravels outside, dwindling supplies and cabin fever threaten to tear apart the friendships inside. Eventually, they are forced to leave the house, facing their fate and the true meaning of friendship and redemption.