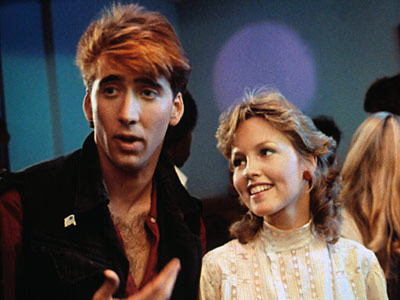 MGM’s near-bankruptcy from a few years back must have really shook them to their core, because ever since they came roaring (sigh) back they’ve been trying to remake nearly everything in their library from Robocop to Carrie to even the recently announced Death Wish.

Add another cog to the MGM Remake machine; Deadline reports that the studio, in conjunction with Paramount, are unleashing a remake of the 80’s classic Valley Girl, which helped change the lexicon of our country as well as jump started the career of Nicolas Cage. But this isn’t just a straight up remake because that would be too easy; instead MGM is turning Valley Girl into a musical in the same vein as the upcoming Rock of Ages where instead of exerting any creativity, they’re just optioning 80’s songs and having the cast sing them instead. Great. Didn’t we stop caring about the 80’s yet?

And in a surprising turn, MGM has hired a relatively new director named Clay Weiner to helm the project. A high profile commercial director, the only movie on his resume is the 2010 made for TV comedy Fred: The Movie for Nickelodeon. If you don’t know what a Fred is, keep it that way (you’ll thank me later). So how did a novice like Weiner end up with what is in theory a high-profile gig? He made a three minute demo reel featuring some of the songs that’ll be in the movie and paid for it out of his own pocket. The execs were impressed enough to bring him on board and as much I’d love to crap on their decision, I simply cannot; Weiner showed the gumption to get the gig and I can’t begrudge him for it. We all wish we could do the same, even for a Valley Girl musical.

While the new Valley Girl will share the name of the 1983 movie it’s remade from, its plot will be completely different: this version will follow a punky teenager (essentially the Cage role) who spends the movie trying to woo a high fallutin’ valley girl away from her snobby boyfriend. The script, originally by Amy Talkington, is currently being re-written by Jenny Lumet who is also writing The Language of Flowers for Fox. Expect casting and other news to quickly materializes as Valley Girl begins on the fast track to production.

While I’m happy that MGM is at least doing something other than a full-on remake, a musical Valley Girl does not sound enticing in the least especially since they’re just going to use new wave songs from the 80’s instead of original music. It just seems so lazy and in a movie industry obsessed with remakes, not even being able to cobble together new music is on a whole other level. Lumet’s involvement is worth noting since she is a coherent writer, so maybe she’ll turn crap into gold during her rewriting process. Either way barring a singing Nicolas Cage cameo, I don’t know if I’ll even give it the light of day.

Here’s the trailer for the original 1983 film if you have never seen it: