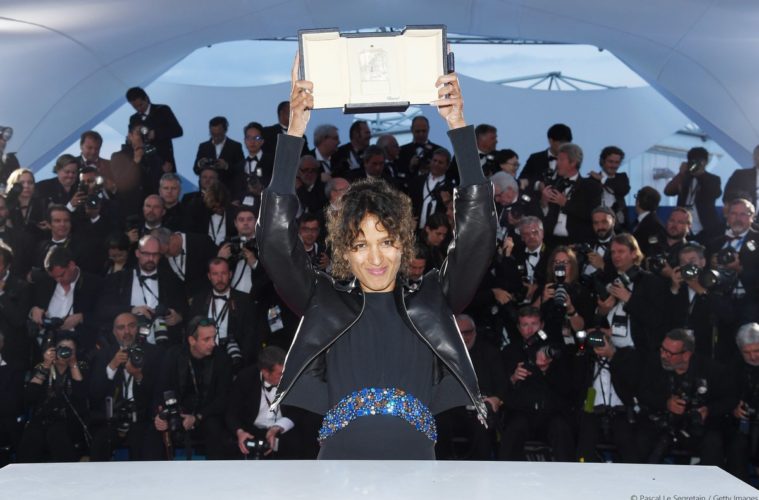 Mati Diop on Her Feature Debut ‘Atlantics,’ Giving Meaning to Lost Lives, and the Hysteria of Cannes “Atlantics is a film about being haunted, being spellbound, and the idea that ghosts are created within us.” – Mati Diop

The ghosts in question in Diop’s film manifest in the bodies of young Senegalese women when a group of men die at sea in search of a better life in Spain. As the women mourn their loss, the men–who left Senegal because their boss scammed them out of wages–rematerialize to seek revenge. With the help of their lovers, the men and women haunt him in a way that’s more political than Hammer House of Horror.

“Somewhere along the stretch of Senegalese coastline where Mati Diop’s feature-length directorial debut Atlantics takes place, a futuristic tower stands tall and spectral above the ocean–a sinister crossbreed between a stalagmite and a lighthouse, its lights thrusting red and warm blobs into the night,” Leonardo Goi said in our Cannes review. “It’s a fictional place in a story of magical, mysterious elements–a love story that crisscrosses between social commentaries and ghastly apparitions, addressing the global migrant crisis through a language of disquieting and stunning reveries.”

We spoke with Mati Diop at the 57th New York Film Festival about crafting her debut feature film as the completion to her 2009 short Atlantiques. Diop talks about being marked, or entranced, with Serigne Seck’s story. She also discusses the political meaning of possession in the film, and being the first woman of color to compete at Cannes.

The Film Stage: You did your own cinematography for the five short films you directed before Atlantics. Can you talk about working with cinematographer Claire Mathon (Portrait of a Lady on Fire, Stranger by the Lake) on your feature debut?

Mati Diop: This time I thought it was a better idea not to do it myself. I did it when I shot on MiniDV–I do it when I have a very small, low-tech camera. I don’t do it when there’s so much going on with the actors. It doesn’t mean that I’m not behind the camera. Even if I have a great DP, I frame the shots. To be honest, in the end, it doesn’t make a big difference because I know I’m there.

Did you create a backstory of what happened to the boys on the boat?

The backstory is my short Atlantiques. Through the story of Serigne Seck, which is the hero of the short. He’s telling his journey to his two friends and me. We really get to experience something from his own words. In the feature, it’s about everything except what’s going on in the boat. It’s about what’s going on with Ada.

In your short film Atlantiques, Serigne says, “When you decide to leave it’s because you’re already dead.” Will you talk about what that means in the short and its relevance to the feature film?

I can’t talk about that because these are the words of Serigne and I think some of my films and images begin where I have no more words to express what I feel. It’s too eloquent and I think the words of Serigne don’t need my explanations. One of the things Serigne shared with me during the night I filmed him, I think that encounter marked me enough to make a feature after that. It may sound easy or simple, that I made a little film that’s only one sequence, but so much happened that night. He entrusted me with so many things that you rarely have the chance to hear and experience and understand and touch. I felt that through filming, Serigne gave me the possibility to approach a certain truth of what was going on at the time. It’s a little bit like being entranced and the feature comes from there.

In the feature, the women become entranced, or possessed, by the ghosts of their dead lovers, which takes on a political meaning.

It was always mixed. The idea was if these boys–who left their countries for a better future because they were not being paid–if they could come back what would they have to say? The fact that they don’t receive their salary before they leave it made me want them to take revenge and to ask for the money back. In France we have a region on the west that’s open to the Atlantic and there’s a lot of tales where people drawn to the sea, come back to fix things. There are stories about ghosts who come back for their money. I was inspired by those tales because they’re simple but full of meaning. It’s also a way to go against the sadness of their lost lives. It was a way in the film to give sense to their lives, not accept the tragic situation and use the film on my part as a way to refuse their fate. As the film is mostly about the present and the living, I was also interested in what’s going on for these girls. How is their everyday life being transformed? How does it affect their intimacy, their imaginations? That was the front story, about Ada (Mame Bineta Sane) surviving a disappearance and her lover coming back as a ghost. Did the men leave for work in Spain without telling anyone? Why did they go at night?

It’s not something they would do in the daylight–it was their secret. It has a sacred dimension to it culturally over there, you wouldn’t take a boat in the day unless the parents know about it. Most of them wouldn’t say anything to anyone because it’s simply a cultural way of doing it. You call when you arrive, you don’t say that you left. For Souleiman (Traore) and the boys in the neighborhood, it was a kind of nocturnal crew. It was like a secret pact between them.

When Atlantics played at Cannes there were stories about you being the first woman of color in competition. Do you feel expectations or responsibility because of it?

No. You know, Cannes creates a lot of shortcuts and hysteria. It’s not the place you get the chance to have discussions about the films, about making them. You have to accept it can be very superficial and surface level. Of course, I prefer when it’s more about cinema. I wasn’t surprised by the stories, I mean, first I was because I never thought of it until I saw it in a newspaper. [Laughs.] When I found out I was going to Cannes, I wasn’t, “Oh, I’m going to be the first woman of color.” I told myself, “Fuck! It’s my first picture and I’m at Cannes.” It’s just insane. But I must admit that when I found out about the competition I was a bit skeptical. “Was that for my film or because it’s good to have a black woman?” Of course, it’s not one reason or another. Being in competition is always a mix of good and bad reasons. It’s not a pressure. I just hope it will happen more and more.

Atlantics is now in limited release and arrives on Netflix on November 29.