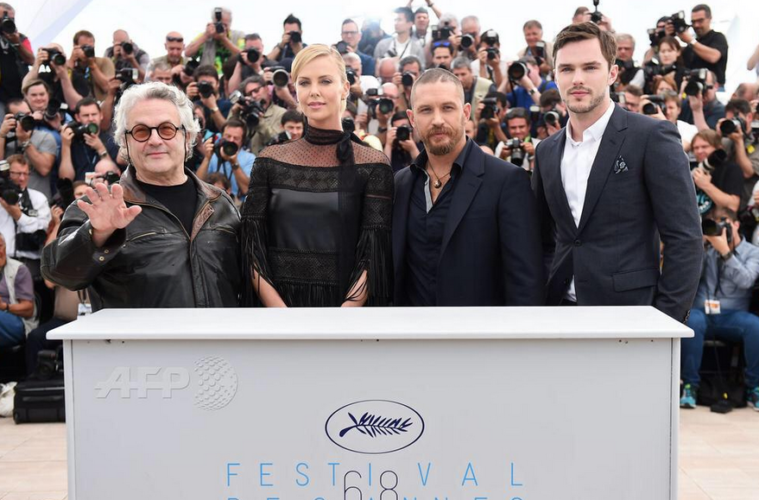 Watch the opening press conference for Cannes featuring the jury:

Watch the Cannes press conference for Mad Max: Fury Road, in which Tom Hardy apologizes to George Miller (via Indiewire):

“For seven months, I think the most complicated or most frustrating thing was trying to know what George wanted me to do at any given minute so I could fully transmute his vision. Because he’s orchestrating such a huge vehicle, literally, in so many departments, because the all the vehicles are moving and the whole movie is just motion, I have to apologize to you [looking at Miller] because I got frustrated. There was no way that George could have explained what he could see in the sand when we were out there… I knew he was brilliant, but I didn’t quite know how brilliant.”

Modern audiences, particularly American ones, seem to have whittled down their interest in seeing a movie almost exclusively to the plot. It is the “high-concept” craze that has been booming for the past 10 years or so. Maybe it’s not the audiences; maybe it’s the gatekeepers — the executives, the marketers and the distributors who, time and time again, aim for the lowest common denominator in their attempts to turn a quick profit. Maybe all that effort has led to filmmakers censoring themselves in an attempt just to get their movies made, and maybe that is why so many films these days unfortunately focus strictly on the familiar narrative beats that audiences have come to expect.

Watch the Cannes press conference for Matteo Garrone‘s Tale of Tales (our review):

Both an actual film and a mythical cinematic object Jacques Rivette’s Out 1 (sometimes subtitled Noli Me Tangere) was shot in 1971 and premiered that year in a one-time-only screening in La Havre. It didn’t surface again until 1989 at the Rotterdam films festival where it was shown in complete form. That’s because this more-than-magnum opus is 729 minutes long. If this brings Andy Warhol’s twenty-five-hour ****/ Four Stars (1967) to mind it should be pointed out that unlike Andy’s marathon, Out 1 consists of eight parts, roughly ninety minutes in length thus easily digestible over whatever span of time one chooses. In 2007 Out 1 was screened in New York, Los Angeles and Berkeley as a two-day presentation (four episodes each day) with suitable allowances for breaks, intermissions, lunch and dinner. It would also be quite suitable for showing as a television mini-series—which was Rivette first had in mind. French TV, however, rejected the idea. And once you see the film—coming to the U.S. soon—and consider it in light French politics in the wake of the tumult caused by “the events of May ’68” (as they have come to be known) you’ll know why. Jean-Luc Godard may be France’s best-known political filmmaker, but Jacques Rivette is its subtlest one.