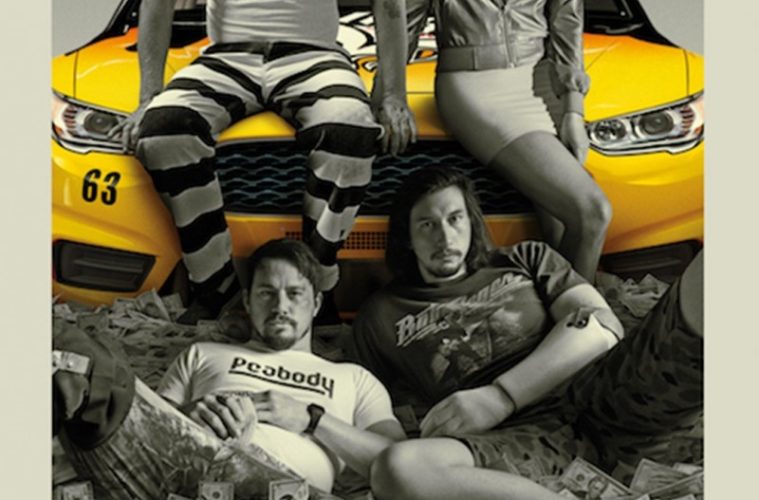 Steven Soderbergh is back, baby — assuming you put less-than-a-film’s worth of stock into two ten-hour seasons of television, a premium-cable something-or-other we might (please?) one day witness, a stage play, various fan edits of classic cinema, a Twitter novella, and editing/cinematography duties on one of the 21st century’s greatest sequels.

All of which is to say that Logan Lucky, his first theatrical feature since 2013 — debates about whether or not Behind the Candelabra is at or after the cut-off point will be carried out elsewhere — probably doesn’t befit a greeting tantamount to Christ emerging in Revelations, nor come close to having that in mind. But a heap of goodwill is deserved, not least of all for how it evinces so much of what’s made him that rare journeyman between arthouse and multiplex; and while one is by and large well-inclined not to presume much about career-sized intentions, a cursory glance reveals overlap after overlap. It’s an easy-enough game of spot-the-predecessor — the heist mechanics of an Ocean’s movie, the working-class struggle of a Magic Mike, and, first most riskily and then most fascinatingly, the procedural iciness of a Side Effects or Contagion.

The reward is watching Soderbergh waltz with a deceptively loose style so thought-through that it’s baked into the movie’s bones. Its color palette, true to the sunny southern setting, is brighter than his recently anemic collaborations with inseparable cinematographer Peter Andrews; the flow and elocution of debut scribe Rebecca Blunt’s dialogue is as folksy as it is purely verbose, playing as written, yes, but crisply so; the acting style, contrasting oddly with her efforts, is looser, more off-the-street than out-of-the-sensory-deprivation-chamber; and the dad-rock song selection hums in an uncommonly comfortable way for a Soderbergh soundtrack (it’s at least the best “Fortunate Son” has sounded in a spell). He largely jettisons the long-take mode adapted significantly for The Knick, returning to a tighter shot-by-shot pattern we’d seen honed with his heavy adoption of digital forms from the late 2000s onward; yet the speed at which his familiarly tight compositions follow each other is, as dictated by the also-inseparable Mary Ann Bernard, looser than the Soderbergh norm, moving not so much with less care than with less tension.

Because it’s a much smaller operation, more on account of its characters being uncertain as to how they should move forward, it’s a heist movie with comparatively less in the way of build-up montage than Danny Ocean et al. robbing a casino. Logan Lucky‘s humorous, well-oiled plotting operates on a macro scale, eliding various details regarding incident that’s to come, sometimes that’s passed, and relationships between characters until what Blunt and Soderbergh found the most decisive point on which to land. This spareness sometimes has a way of diminishing an otherwise click-clack rhythm; threads involving Channing Tatum’s home life are ultimately loose strands, despite the nice conclusion they receive, and as slapdash as much of the central job’s motivation. But Soderbergh is so confident in conveying a smart-dumb temperament, that this ambiguity is all part of the excitement and not so much an overall characteristic.

Logan Lucky‘s spell is light, the magic casual. On some semi-subconscious level, it’s about realizing, nearly after the fact, that Adam Driver was indeed behind the wheel of that car we see plow through a gas station in one take, or that a longer-than-it’s-pronounced sequence really does force Daniel Craig to spew a great deal of fake (?) vomit. In the moment, it’s about the pleasures that rise from watching ostensibly dumb people get away with it all — Craig, his bleach-blonde hair and precise Virginia accent, living up to his moniker, Joe Bang, is a scene fragment like no other — yet is too affectionate to implicate them as such.

The freshness of watching Soderbergh run all the way with an everyman ratchets up the threat that Logan Lucky will crumble when a familiarly clinical tone rears its head towards picture’s end. The suspicion that crept upon me was of witnessing some unwanted fourth act; this is, on the face of it, half-true. But where and how it supersedes a late-in-the-game shift of, say, Side Effects, which crumbled to standard thriller fare whose only saving grace was the fortune of being well-dressed, is in making worthwhile use of its established pieces — how it contrasts with a film’s well-established form, how it reveals more fully what affections are created for its main players. Fun fare turns ominous, and its transformation into procedural drama, a near-total recalibration of visual and aural design, instills a nearly physical sense of bottoming out as higher powers attempt their descent upon a dumb-luck score.

Is there a layer of unreality to the happy ending, or whatever you might reasonably call the still-somewhat-ambiguous final shot? Perhaps, but that’s not exactly out of the ballpark we’ve played in almost all the way through; more critical is that its ways of reaching (and not reaching) a logical end make clear how Soderbergh and Logan Lucky‘s sympathies run. The preceding 100-or-so minutes, the ingrained texture of these peoples’ lives and selves, wouldn’t have me hoping any other way — sans some room for another trip with these lovable buffoons.

Steven Soderbergh never left, and it’s good to have him back.