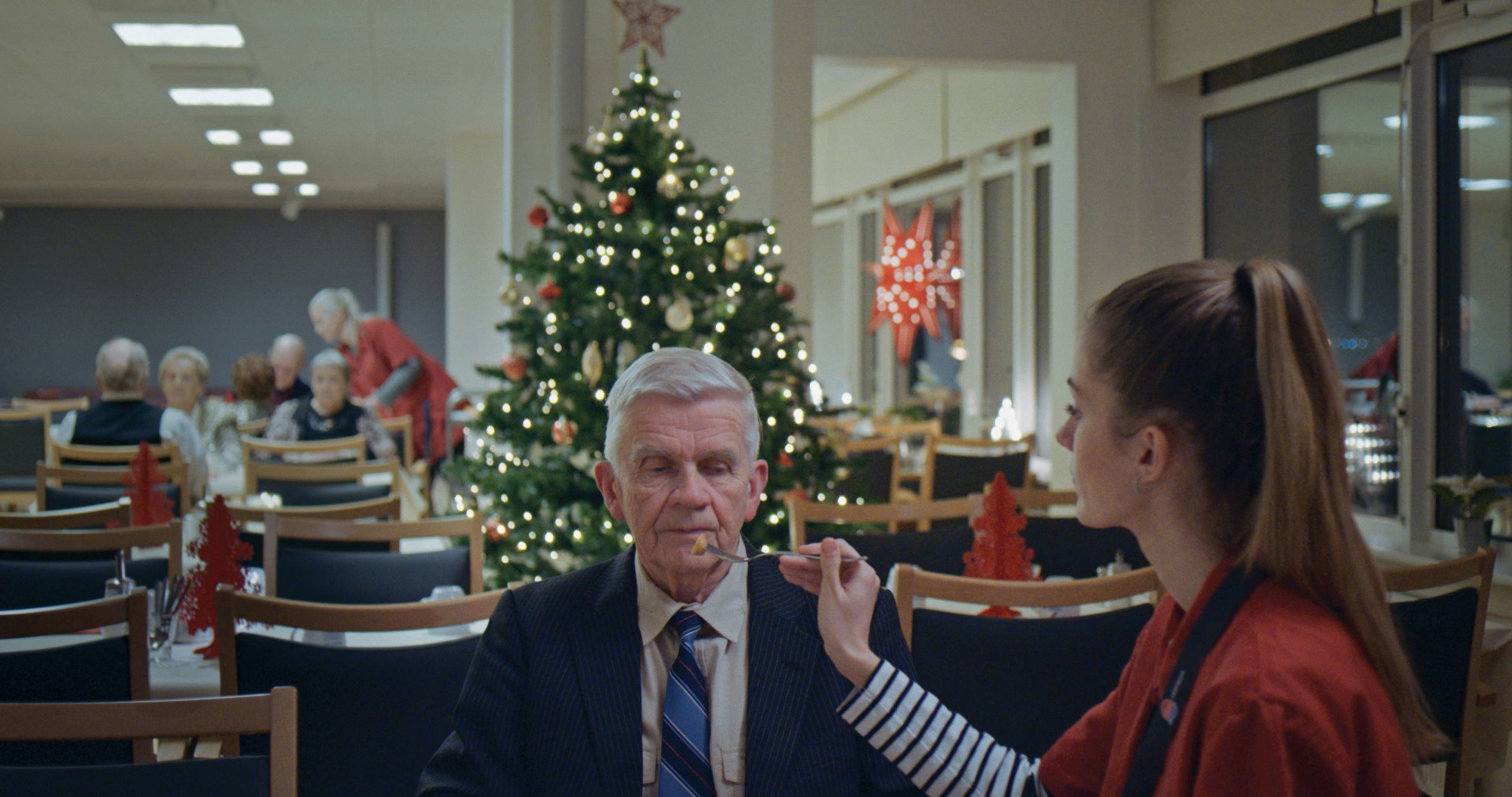 A search and rescue mission wanders into an ice-covered landscape; a librarian tells his parents he will not have whale meat for dinner, and neither will his kids; an African American athlete pops out of a tanning bed to take a phone call from home, he reassures his mom the coach told him to use the solarium “not for a tan, but to embrace the light”; butchers dance to Christmas tunes inside a slaughterhouse, chopping and pounding carcasses; and a grandma holds his grandson’s hand before pointing to her late husband’s grave, warning the child that “we’ll all be buried here: first me, then your mum, then you.” There are 56 scenes inside Rúnar Rúnarsson’s Echo, 56 tesserae of a sprawling mosaic that have nothing in common save for the fact that they all take place around the same time (the last few days of December 2018) and place (Iceland).

An 80-minute neo-vérité hybrid between documentary and fiction, Echo has the poignancy of a love letter, the immediacy of a first-hand chronicle, and the energy of beating organ. It feels alive in a way few other films can claim to be–a feat that’s all the more impressive considering Sophia Olsson’s cinematography crafts each scene as a static tripod shot. An ingeniously crafted study in observational cinema, Rúnarsson’s follow up to his 2015 San Sebastián winner Sparrows dances between sadness and irony, between satire and tragedy, with contagious energy and candor. Roy Andersson acolytes are likely to venture into familiar grounds here: with its blend of bleak, surreal humor and vignette-scaffolding, there are moments Echo harkens back to the tone and structure of the Swede’s 2014 A Pigeon Sat on a Branch Reflecting on Existence. But unlike Andersson’s Golden Lion Winner, Echo’s micro-chapters seldom feel staged.

Beguilingly minimalist and seldom spanning longer than a couple of minutes, the 56 vignettes exude a fly-on-the-wall feeling, hinting without ever fully revealing the multitudes each carries. Part of Echo’s many pleasures is to partake in the kind of digging-up Hemingway had called for in his iceberg theory: every single episode feels like the surface layer of something tucked deep within, a window into worlds and lives with their own subplots, their own dramas, their own roots. There is a whole film in a half-way segment where two preteen stepsisters compete for their father’s attention over a piano piece, and a whole life in a later chapter, where a daughter visits her old father in a hospice, feeds him, and whispers things he does not seem to register. And while there may be very little point in trying to address Echo’s plot (aside from the static tripod shot, the only other dogma Rúnarsson follows is to never return to the same characters twice), the absence of a traditional, linear scaffolding feels somewhat liberating, prompting one to look for connections that venture into themes and tones.

A sense of urgency and longing reverberate all throughout. This unassuming gem of a film is– among many other things–the chronicle of several interlocked crises, everyday struggles that spiral out of people’s homes and swell into some larger, communal traumas. There are constant allusions to Iceland’s struggle against poverty, the kind of “class void” a lady denounces on a radio show, the consequences of which burst most vividly in the sight of people queueing outside a Red Cross food bank over Christmas. There’s the question of immigration, piercing the screen in an early shot of two undocumented migrants plucked out of a church by the cops, surfacing again in the sight of a construction area abandoned by its Polish workers, striking for better wages, and rekindled in the New Year’s wishes to the country by Prime Minister Katrín Jakobsdóttir, a televised speech that plunges a party into a bitter argument, and leads the supper to a premature death.

Echo landed a slot in Locarno’s international competition billed as a “portrait of modern society,” but I fear the label hardly captures the film’s mystery and its heartbeat. Yes, Rúnarsson’s puzzle does ultimately stitch together a snapshot of present-day Iceland, but it does not accomplish this by parceling out this or that grand statement. Nor, politically conscious as it may be, does it ever ring polemic or unnervingly preachy in tone. If the feeling it leaves you with is to have witnessed an all-encompassing, choral picture of an island and its people, the realization comes organically, and this is very possibly Echo’s strongest asset. Here’s a film that can aspire to say something universal because it remains anchored in its specifics: the minutiae, quirks and idiosyncrasies of the everyday moments it portrays, and the people who enact them. Its 56 postcards do not exist independently of, but in a dialectic relationship with each other. An early moment inside a church readying for a funeral is juxtaposed with a later segment in a delivery room; a kids Christmas recital (arguably one of Echo’s funniest sketches) finds a strident, humorous contrast in a cut to a women’s bodybuilding context. It’s all part of a large, breathing canvas–a patchwork of voices, people and places shimmering with unassuming and candid wonder.