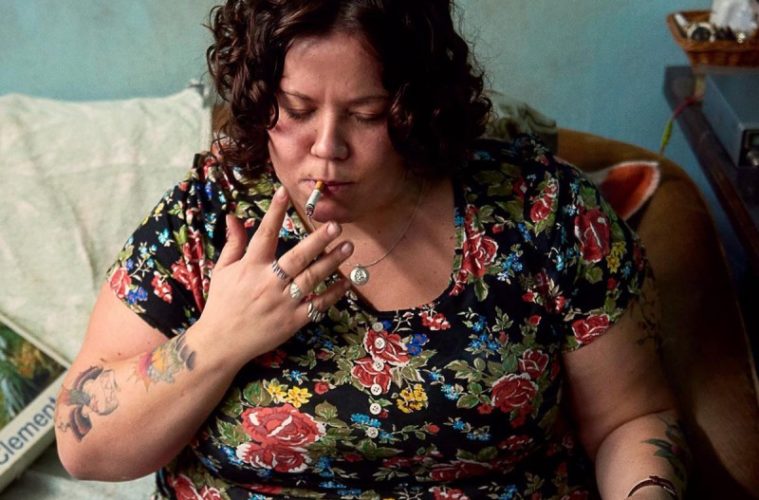 If there is an image to best introduce audiences to the grimy cinematic world of Ray & Liz–the remarkable debut feature of Turner prize-nominated visual artist Richard Billingham–it might be, fittingly, the very first one to hit the screen: that of a cracked, burnt-out light bulb filmed dangling beneath a nicotine-stained ceiling. Billingham has spent much of his career as an artist documenting and, in his short films, dramatizing the lives of his father Raymond (a chronic alcoholic played here by Patrick Romer and, as a younger man, by Justin Salinger ) and mother Elizabeth (Deirdre Kelly and–best of all–Ella Smith) and Ray & Liz could be viewed as a culmination of that work. It’s an immersive poetic-realist dive into the artist’s fractured memories of his parents during the time he spent growing up in Birmingham in the ‘70s and ‘80s.

One could say that the main strength of Ray & Liz is the vividness of those memories. Billingham’s screenplay cuts between three time periods, the earliest seemingly from when he was around ten years old and living in a council house with Ray, Liz, and his younger brother. It’s pre-Thatcher Britain, of course, so life is not yet all that bad for a family of the Billinghams’ means (they even have a color TV). The director then shoots forward about eight years for the second section, by which time we find that they’ve been forced to downgrade to a flat in a tenement building and are well on their way to accepting a whole host of demeaning new routines. One of Liz’s involves collecting cigarette ends from the floor of the tube station in order to supplement her incessant chain-smoking. The most contemporary sequences also take place in that flat, although by this time Ray has been left alone with just a bed, a supply of home-brewed booze, and the family’s old immersion heater for company.

All of this style is not without substance. Shot on beautifully tactile 16mm film, cinematographer Daniel Landin (Under the Skin) consistently focuses on small details with the kind of fascination one associates with a child’s-eye view. Furthermore, while this working class, kitchen-sink midlands mood might lead the viewer to believe that the director owes a significant debt to Ken Loach, there’s an even stronger case to be made for Lynne Ramsay’s Ratcatcher or the earlier films of Terence Davies–each of which are personal recollections of their respective director’s youth.

There is also something to be said for Billingham’s surrealist flourishes, which are often manifestations of wildlife imagery (a reference to Liz’s own real-life obsession with exotic jigsaws and decor, and also a clunky metaphor for the boys as caged beasts). More importantly, however, is the fact that while the film depicts what can objectively be viewed as an upbringing of abject misery, the director seems (in a way similar to Ramsay and Davies) to be recalling a great deal of it through a laced curtain of almost magical nostalgia and, breathtakingly at times, even humor.

It’s indeed remarkable considering the circumstances that there is apparently very little blame being doled out here. There is an early sequence when Liz’s not-the-full-deck-of-cards brother (played brilliantly by Tony Way) is tricked into doing something grim and grotesquely hilarious by a local thug (Sam Gittins). His actions result in Liz casting him out of her home and beating him with the pointy end of a high-heel. When she later discovers that she was in the wrong, she chooses to destroy the evidence of her wrongdoing. Naturally, ego was to blame for her actions but, as we discover, so was the potential loss of a small source of the family income. While the director leaves us in no doubt about his mother’s cruelest instincts he doesn’t fully seem to hold it against her either.

Billingham’s film comes across as a man’s attempt to understand this world of so few soft edges. Later on, the director’s younger brother (Joshua Millard-Lloyd) will spend a night sleeping rough before being taken in for a couple of days by his pal’s mother. They are a lower-middle-class family (and, interestingly, also immigrants) and yet the humble comfort of their home feels like a relative oasis of warmth and safety in the film. Out playing in the park the next day he passes Liz who casually mentions that the cops have been out searching for him, before carrying on with her business of inexplicably pushing a rabbit in a buggy. Priorities, indeed.

A constant presence of Billingham’s career as an artist seems to be his father’s alcoholism and here it is dealt with with a similar type of wounded, self-deprecating empathy to that which he shows to Liz. Stripped of benefits in the middle sequence, Ray takes to brewing his own booze and by the third section he is in such a state of subservience to this sickly black liquid that he lines up his full 2L bottles beside his bed with the same sort of reverence the primates showed to that big black thing in 2001: A Space Odyssey. Ray spends what are surely his remaining days sleeping and drinking and listening to the radio while never leaving his room; an image of misery if ever there was one. Yet the director films it with tenderness and humility. One of the opening shots shows Ray flinging a picture of Jesus from his bedroom window. As the film closes, it is clear that God’s judgments have long since left this particular building. Good riddance.

Ray & Liz premiered at the 2018 Locarno Film Festival and opens on July 10.