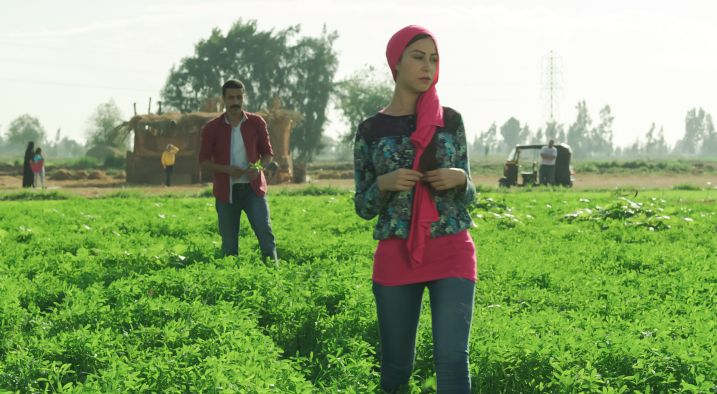 “Today we gather in love.”

The wedding, in cinematic terms — the opportunity to present dozens of extras of mingling amidst an ever-expanding backdrop (e.g. the Visconti quotations from The Godfather or The Deer Hunter) — is, to say the least, a very exciting opportunity. Though within Brooks, Meadows and Lovely Faces, the idea of a wedding points to a pressure for national unity when the narrative in question is all about splintering: separate couples all living in fear of their true feelings for others in the shadow of class and age.  This truly Sirk-ian impulse sets the stage for Reefat and Galal, our two lead brothers in the small Egyptian town of Belqas: the former a lovable, actually illiterate oaf; the latter a slick lady’s man with a scarred record due to dodging military service eight years prior. Both work as chefs under their father, Yehia, who has a catering service for special events. Reefat is engaged to his niece, Karima, who’s secretly in love with Galal. Yet Reefat isn’t one to be upset, being that he has his eyes on the divorced Shadia, who’s forced to restrain her reciprocated admiration for him being that he’s younger and of less money.

Casting a shadow against all of this are corrupt forces that conspire to tear them apart: the rich Farid, an attendee of the wedding who wants Yehia to sell his business, and Galal’s Morris Day-like fast-talking childhood friend, Farry, who tries to convince him to quit and leave for Saudi Arabia to start a new life for him and his young son.

If these multiple strands seem somewhat deceptive — as it aligns us with the “soap opera,” a term certainly still used as a pejorative to describe anything remotely melodramatic — Yousry Nasrallah’s directorial choices instantly remove the slightest thought of daytime television, be it the bright color palette that differentiates each home and character or complex blocking that, in tandem with a general lack of shot-reverse-shot, situates every figure’s relationship to the other. More so, a cinema that consists of wistful looks, be it locked eyes or one character spying behind their object of affection’s back, harkening to the depiction of romance in silent film.

Later, though, it comes to be an example of the buoyant melodrama that takes risks with violence, e.g. a late-in-the-game castration that’s as surprising as the rape in Verhoeven’s Showgirls. It not only gives all the romantic hijinks higher stakes, but a bluntly angry, political dimension.

The energy from extended musical numbers, be it a gaudy Egyptian boy band dressed in denim and rhinestone, naturally evolves into a ridiculous climax featuring a mass of computer-generated bees that almost look as if they’re from an episode of Decker (though that’s not really an issue). In racing to the finish line, Nasrallah’s exuberance may outweigh the actual effect of his story; we feel more through his camera’s placement than the actual chemistry between his stars. Yet considering the growing distortion of what “popular cinema” can mean from the United States and China, the film may be more than enough of a reminder of the romantic melodrama’s capabilities.