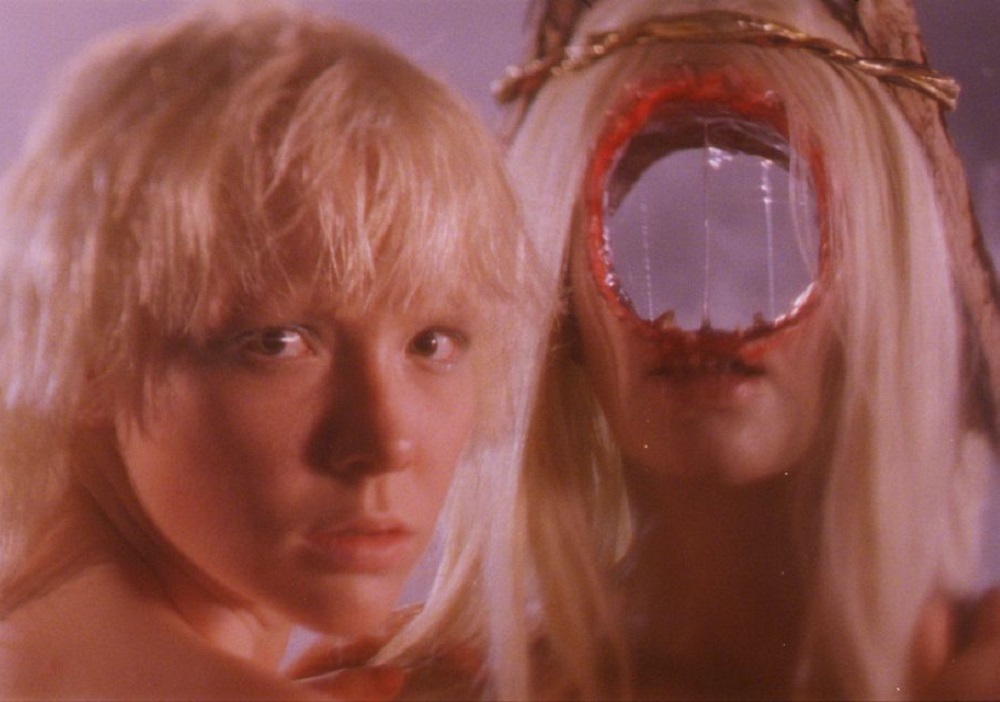 In the post-apocalyptic nightmare of After Blue, humanity—or what’s left of it—roams a former paradise turned wasteland. The Armageddon that wrecked the Earth in some undetermined past left no machines behind, no screens, and, perhaps most conspicuously, no men. In the distant planet the human race fled to, and which writer-director Bertrand Mandico’s film is named after, “they were the first to die,” we’re warned early on: “their hairs grew inside them, and killed them.” As it was for its predecessor, The Wild Boys, After Blue is suffused in a feverish ecstasy, that wild excitement that comes from a watching one world crumble and another jutting into being from scratch, a vision of a clean slate in which everything—and everyone—can be reinvented, and every norm challenged.

At its heart is Roxy (Paula Luna Breitenfelder), a teenage girl living with her mother Zora (Elina Löwensohn) in a village nestled in some remote corner of the planet. As the film opens, Roxy is wandering along the beach and bullied by three girls her age when she suddenly catches sight of a head popping out of the shoreline. That’d be Katajena Bushowsky, aka Kate Bush (Agata Buzek), a Polish assassin buried alive in the sand by a foreign militia in hopes she’d drown at the first high tide. All of this, of course, is stuff Roxy doesn’t know; when the algae-smeared head begs for help, she heeds the call and plucks the stranger out of the sand. As it turns out, Kate Bush is something of a genie, and in exchange for Roxy’s mercy, she promises to fulfill three of her “secret” (read: too dark to be confessed) wishes, the first of which is to slaughter the three girls who’d tormented Roxy (and turned away from Kate’s cries). It doesn’t take long for the news of the triple murder to spread across the village. Seeking revenge, the dead teens’ mothers order Zora and her daughter to leave, and only return once they’ll have tracked and killed Kate Bush.

What follows is a fantasia perched somewhere between Italo Calvino’s Cosmicomics and the darkly surreal universe of William Burroughs’ books (one of which, incidentally, had served as inspiration for The Wild Boys). The world mother and daughter wade through is an extraterrestrial landfill of poisonous mountains, quartz stalagmites, putrid tree-sized mushrooms, and myriad obscure cephalopods-like creatures harvested for food, sexual pleasure, or both. For even though everything here is either rotting or deliquescing, the landscape—and all the eccentrics dotting it—teems with untethered lust. The strange, mystical attraction Roxy feels for Kate Bush carries a clear sexual overtone, but desire, in After Blue, flows from mouth to mouth as in a process of osmosis. To be sure, sex doesn’t play the same role it did in The Wild Boys; where that film unspooled as an erotically charged riff on “Lord of the Flies,” in which a quintet of young men (all played by women) gradually shed their genitals and genders in a binary-shattering hallucination, Mandico is after something different here. Yes, Roxy does undergo a kind of sexual awakening, but After Blue isn’t as interested in gender fluidity as it is in capturing and complicating another equally shapeshifting, elusive notion: that of a community.

It’s telling that, as the village women order Zora to kill Kate Bush, they should stress she must do so “out of community spirit”. “In After Blue,” Roxy muses seconds later as mum and daughter schlep up a mountain like a vision plucked out of a Jodorowsky film, “nomadism is seen as a form of decline.” Later, when mother and daughter happen into an artist (Vimala Pons) and her blind male android (Michaël Erpelding), Zora blurts out, “do you have community spirit here?” as if community spirit was an essential resource on par with fresh water or oxygen. I can’t pretend the pursuit is as riveting and provocative as the debunking of genders was in The Wild Boys, and the film’s leisurely pace—After Blue clocks in at just over two hours—leave some of its sections to drag and stall. For all the visual flairs and perverse adornments, there were moments when the fantasy locale Mandico conjures stopped giving me new things to look and marvel at, but the journey still crackles with a febrile excitement, a playfulness of moods and images that makes it easy to be lulled in all the bizarrerie.

That’s in good part because After Blue contains all the visual hallmarks Mandico embraced in his short films, and which had already rippled on to The Wild Boys: tinted lenses, superimpositions, rear projections. It’s a retro aesthetics brought to life by cinematographer Pascale Granel that further complicates the film’s temporal framework—in more ways than one, After Blue is a vision of the future haunted by the past. Sometimes seesawing between comedy and horror, sometimes lurching between a lysergic trip and a fable in the vein of Disney’s 1940 Fantasia, After Blue teems with references that ring anachronistic, vestiges of a bygone world that, in the film’s timeline, feel all the more absurd. Take the guns, named after luxury brands (there’s a Gucci, a Paul Smith, while the male android is referred to by its owner as “a Louis Vuitton”), or the echoes of movements and paranoias that haunted the Earth before doomsday (we hear of “neo-virtualists,” “ultra-neo-classics,” “economic-existential crises”). I’m not too sure Mandico wants us to view these as parts of a larger critique—answers to the question, what will remain of us after the apocalypse?, or snide remarks on our consumeristic practices (though it’s curious that the only male character should be turned into—and referred as—a commodity).

Uneven and patchy as it can be, After Blue remains an exhilarating vision of an Eden gone awry, a portrait of humanity orphaned by a Waiting for Godot-like loneliness. After all, as Roxy tells us at the end, mother and daughter clinging on to each other, this is “a place for all the dead in need of love.”

After Blue premiered at the Locarno Film Festival.