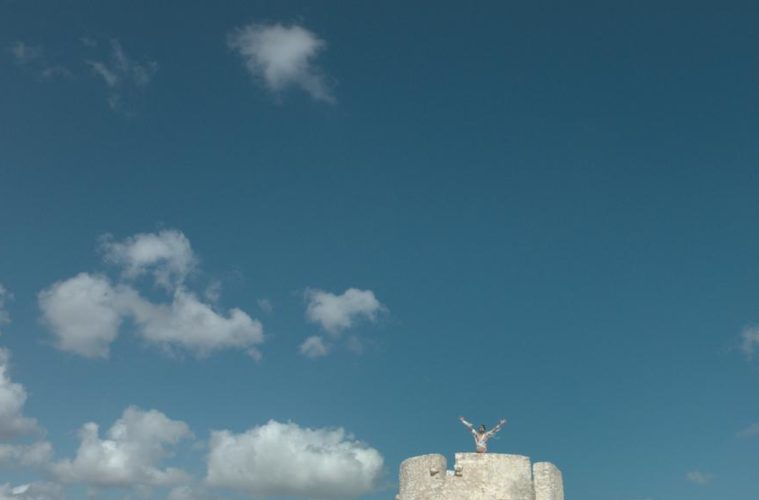 The first part is a period piece of sorts, in which reenactors suit up as 19th-century French colonial fort in Algeria. The dialogue is taken directly from military reports from the time. Except this “dialogue” is warped into incomprehensibility, the actors’ audio synthesized into disturbing, modulated gibberish – perhaps played backwards, or mixed to hell. Sometimes they don’t speak at all, but subtitles nonetheless appear. The past is another country, and these men are in another country not their own besides that, and they are played not by white Frenchmen but by Algerian locals. The soldiers are apparently gearing up for a campaign of brutal “pacifying” of the countryside, but in the meantime they busy themselves acting out bizarre rituals of boredom, playing with their target dummies or trading pornographic photograms. It is the calm of the occupier alongside the storm the occupied weathers. Mari shoots these scenes like perverse versions of classical paintings, arranging the men into playful tableaus.

Fast-forward to the current day and the Greek island of Kythira. Mainly in long shots, we watch people whom Mari has brought to the shore to conjure up an idyllic commune. These characters, too, are isolated from tumultuous events, though they are wholly fictional instead of being based on the historical record. (Alternatively, one can ignore the conceit and view this section as a straightforward document of Mari’s nonprofessionals acting at utopia.) Their festive mood and collective congeniality is soured by the sense that it’s all a put on, and indeed, the final act moves the movie entirely from staged fiction to nonfiction.

In Greece, Mari interviews two different activists: a well-off lawyer in a café and a poor man in a shack. Here we see what colonization has wrought, a devastated economy and an impassioned uprising roiling in response. Whereas the first two parts reveled in different kinds of escapism, here we see the stark reality of resistance, separated from lofty ideals and hashtags. The picture the two subjects draw up of the political situation in Greece is not terribly positive, but still set with grim resolve. (“What I want is not what I hope for,” says one.) Le fort des fous darkens both metaphorically and literally as it progresses, from the orderly, sunnily-lit compositions of the first act to the murky environs of the last. The impression is troubling, and also unforgettable.