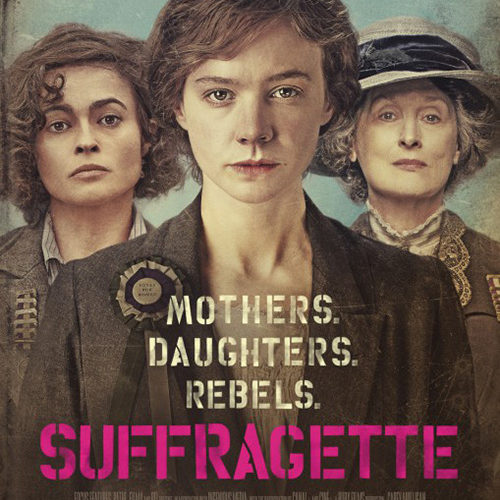 Directed by a woman, written by a woman, and with a cast led by women, Suffragette opens the London Film Festival with the smashing of glass ceilings and shop windows. Even the recent ire of the Twitterati – who criticized the film’s publicity line of “I’d rather be a rebel than a slave” – hardly dims the film’s credentials as a progressive move in women’s filmmaking. This is an urgent, persuasive, if cloyingly conventional history lesson with a story that Hollywood’s barely touched on before.

For not all Suffragettes weren’t the genteel women of conventional Brit period dramas – nor indeed were they twee characters like Mrs. Banks in Mary Poppins. Suffragette is about the working-class experience of Carey Mulligan’s laundry worker, Maud, whose interest in the movement was piqued just as the Suffragette movement was becoming militant.

Set in Bethnal Green – a part of East London still suffering deprivation today – in 1912, it follows Maud as she operates in a dank workhouse where she’s laboured since the age of seven. Now 24, she works in fear of of sexual abuse from her boss (Geoff Bell), her only solace being the escape offered by her husband Sonny (Ben Whishaw) and son George. But when offered the vision of a change to her circumstances, she grabs it. She watches on as her colleague, Violet (Anne Marie-Duff), smashes a shop window in one of the first violent “militant” protests of the Suffragette movement. (It was, by this point, sixty years old in the UK.) When Violet is unable to speak to Parliament after being beaten up by her alcoholic husband, Maud steps in and, for perhaps the first time, is given the chance to speak up for herself.

Mulligan is terrifically understated as Maud – a composite character derived from various working-class suffragettes by writer Abi Morgan – whose stature and purpose grows as events reach their climax. Although it’s initially a stretch to get over her Eliza Doolitle-ish cockney accent, Mulligan can exude an emotional range without saying much. Even though she’s the front-and-center protagonist, it’s Violet and Edith, a pharmacist portrayed by Helena Bonham Carter, that seem to have more lines.

Carter — whose great-grandfather was Herbert Asquith, the Prime Minister who opposed women’s suffrage — represents something of the educated members of the Women’s Social and Political Union (WSPU), an organization founded by Emmeline Pankhurst, and whose line “deeds, not words” is the movie’s defining phrase. But the film’s dedication to this slice of working-class life is one of its great credits, leaving only the leading upper-class figures (e.g. Pankhurst) to bit parts and whisked off in carriages when in danger, while it’s the foot soldiers who suffer harassment, imprisonment, hunger strikes, and force-feeding. Pankhurst, of course, arrives in the otherworldly form of Meryl Streep doing her throatiest English accent this side of Margaret Thatcher.

Abi Morgan, whose Iron Lady script lacked credibility in its absence of political emphasis, brings more political fire to the table here. As Maud’s commitment to the cause deepens, her sacrifices become more pronounced, losing her home after Sonny throws her out — and then her son, because men had sole rights over children. But Maud’s sense of empowerment, that her cause is just, only grows as these life events happen.

Yet there’s a troubling lack of nuance in Suffragette‘s presentation. Although Sarah Gavron’s direction is smart — be it the dank environs of the laundry, or in her 16mm handheld visions of crowds under police siege outside Parliament — this is storytelling told with blunt instruments. Gavron doesn’t offer us reasons as to why Suffrage was so widely opposed by the British (and around the world) until after the First World War. Even the male characters, including Brendan Gleeson’s gruff police surveillance officer — Javert-esque in his subscription to the letter of the law — are largely sympathetic to the cause.  It’s perhaps best summed in that t-shirt-fitting slogan “I’d rather be a rebel than a slave.” Well, wouldn’t anyone?

That said, the film’s addendum lists milestones in woman’s suffrage, listing countries from New Zealand in 1893 to Saudi Arabia, still the only nation not to offer women the right to vote. This is a story without an ending, and that’s the film’s most persuasive point.

Suffragette opened the London Film Festival and will arrive in the U.S. on October 23.