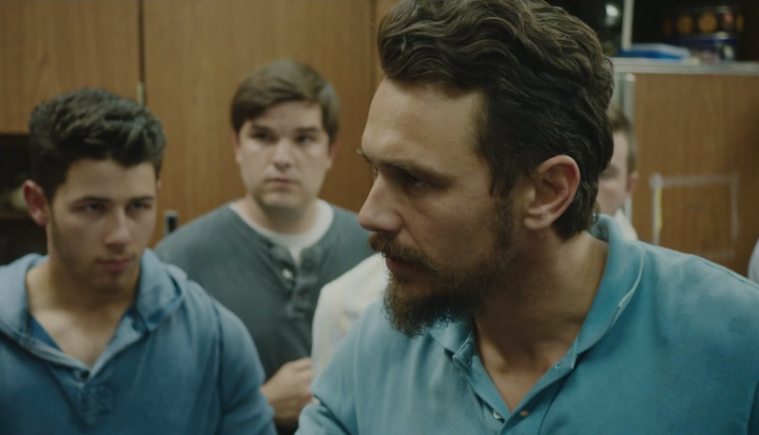 James Franco Wants to Get Punched in NSFW Trailer For ‘Goat’

Far removed from the days of Animal House, Andrew Neel’s Goat takes a look at the initiation process to enter a fraternity (aka hazing) and the strength and limits of loyalty. Led by pop-star-turned-actor Nick Jonas and Ben Schnetzer, with a cameo by producer James Franco, as evidenced in a new NSFW trailer, the script is co-written by David Gordon Green.

We said in our review from Sundance this year: “Telling us little new about the horrors of hazing that Todd Phillips’ documentary Frat House didn’t already do at Sundance nearly two decades ago, Goat is a compelling watch, but in the end, its themes are a bit muddled, and certainly not unique.”

Check out the trailer and poster below for the film also starring Gus Halper, Danny Flaherty, Jake Picking, and Virginia Gardner.

Reeling from a terrifying assault over the summer 19-year-old Brad Land (Ben Schnetzer) starts college determined to get his life back to normal. His brother Brett (Nick Jonas) is already established on campus and with a fraternity that allures Brad with its promise of protection popularity and life-long friendships. Brad is desperate to belong but as he sets out to join the fraternity his brother exhibits reservations a sentiment that threatens to divide them. As the pledging ritual moves into hell week a rite that promises to usher these unproven boys into manhood the stakes violently increase with a series of torturous and humiliating events. What occurs in the name of ‘brotherhood’ tests both boys and their relationship in brutal ways.