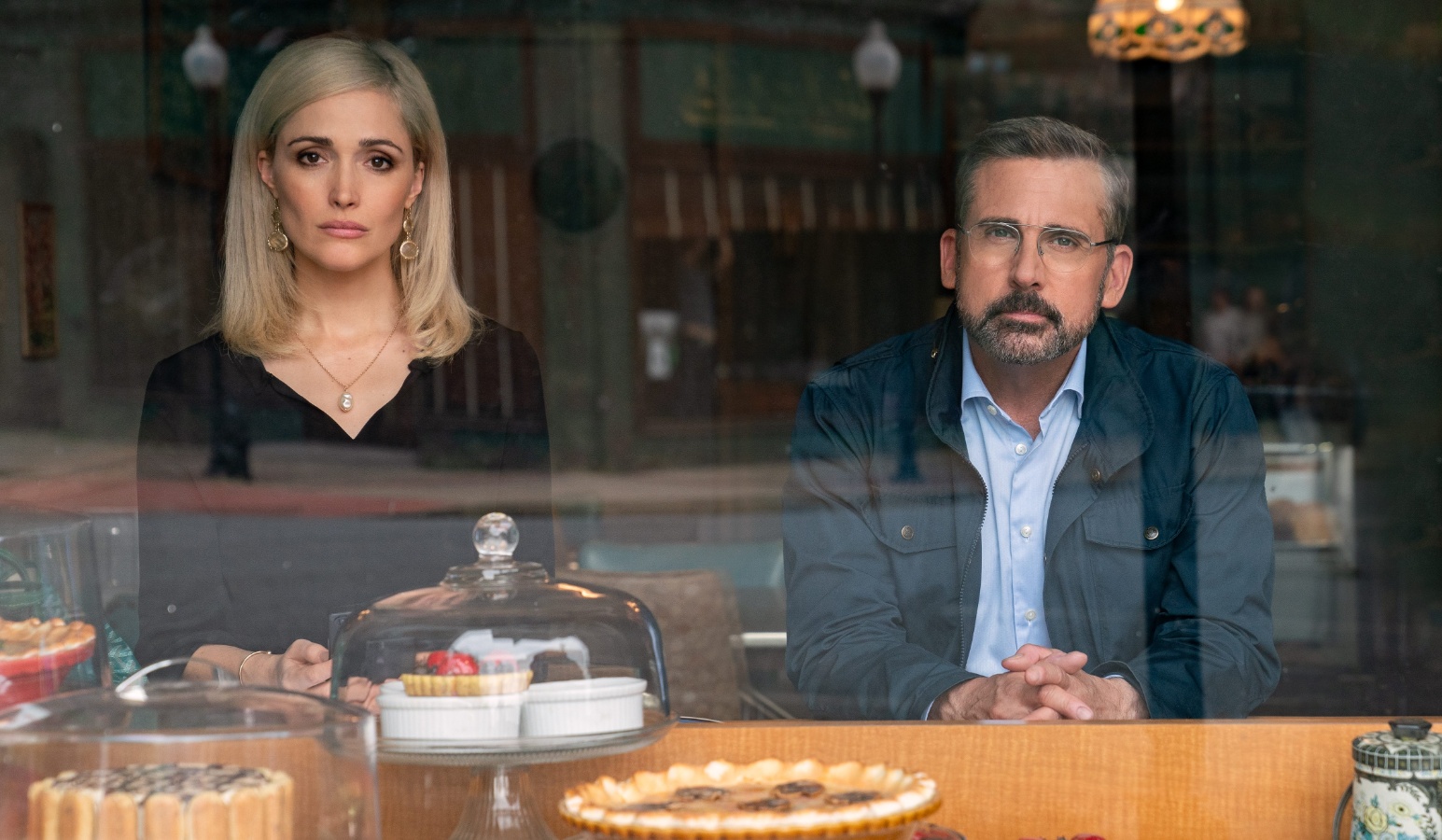 The aftershock of November 8, 2016 has been felt most fundamentally on a human level, as vital rights have been stripped from the underserved and overlooked members of society, a basic sense of empathy has been eradicated, and a maelstrom of deceit has become the foundation of our government. When it comes to the art in response to this nightmare, the output has been a mix of the revolutionary and powerful to the treacly and futile. With his second directorial effort Irresistible, Jon Stewart unfortunately sways to the latter side as he aims to investigate America’s corrupt political system through the microcosm of an underdog campaign in a small town located within Heartland, USA in Rural America. Yes, those signifiers literally appear onscreen near the start, in case one was curious if any nuance or wit would be left on the table.

After his campaign to elect Hillary Clinton fails, Democrat political strategist Gary Zimmer (Steve Carell) is struggling to learn what went wrong. He comes to the conclusion that his team failed to connect to the people who ended up voting for Trump, but may feel a better political answer is out there. Playing like an inverse of Mr. Smith Goes to Washington, rather than bringing the political fight to our nation’s capital, he finds a man that could help start the groundswell to sway the swing state of Wisconsin, specifically in the fictional town of Deerlaken.

The man is retired Marine Colonel, now farmer Jack Hastings (Chris Cooper), who is the subject of a viral video in which he stands up for the rights of immigrant workers in a local town hall meeting. Zimmer believes Hastings, leaning into the moderate angle, should run for mayor and be the catalyst of a new kind of Democrat party that appeals to those that are fed up with both current sides of the political spectrum. So, Carell’s rather undefined, personality-free character ventures to this small town to launch a political campaign that he hopes could be a stepping stone to resonate around the country.

While Jon Stewart’s political viewpoints are no secret, having been aired nearly daily for nearly two decades on television, he does find room to poke fun at both sides and the campaigning process in general. The NPR-listening left’s pandering to appeal to minorities without truly getting to know their personal struggles is a running joke, along with a skewering of the current news media cycle from CNN to Fox News in terms of what they believe is worth covering and how they go about doing so. Yet this tedious film’s biggest issues don’t lie with its simplification of politics or often taking the feel-good easy route, but rather how flat the comedy lands. This in part due to how weakly formed its characters are across the board, as well as the peculiar tonal approach that is taken.

Undoubtedly the lead, Gary Zimmer is far from relatable and it’s not strictly because of his single-minded, politics-centered focus to win at all costs. When it comes to Carell’s character, Stewart simply never finds a handle on his soul–or even soullessness, which perhaps would’ve been more compelling. One puzzling moment he’s terrified of harmless dogs and in another he’s attempting to herd cows in the film’s comedic nadir. In the punchline of another scene, he cracks a joke about the amount of guns in Jack Hasting’s home right after giving a desperate, earnest plea to convince him to run in the election.

Irresistible feels like an excuse for Stewart to throw everything that personally frustrates him at the wall and the thought never crossed his mind what may make logical sense to tell a compelling story with characters one can discernibly define. If Zimmer truly is at the top of his game in political strategy, then his doltish demeanor never once sells his supposed intelligence. As the Republican political strategist Faith Brewster, Rose Byrne is having the most fun of the cast devouring the scenery, but her over-the-top approach feels at odds with Stewart’s intention of a dramatic arc and, ultimately, imposing a Capra-esque lesson to all viewers. As she spews hard-R insults at Carell’s character, it’s the closest to earning a laugh, yet it calls into question the intended audience, as the rest of the proceedings play like a timid, facile satire.

One of the few worthwhile explorations of the Heartland in a post-Trump America, Frederick Wiseman’s Monrovia, Indiana, showed that a director barely needed to even bring politics into the conversation if one wanted to get a sense of the community and its citizen’s viewpoints regarding a desired way of a life. Stewart takes the exact opposite approach here, revolving virtually every aspect of the script around the nooks and crannies of the political system, from the amoral involvement of Super PACs to the effects of mass data mining to the silly stratagem of political ads. Add in a late-stage plot twist, and it’s a lot for a film to have on its mind in a relatively brief runtime. While a few select lines offer some wisdom (“They’re spending to stop something. We’re spending to start something.”), they are few and far between in what is otherwise a dated, bland exercise in envisioning a grassroots political world with healed partisan divides.

The opening credits are a montage of presidents throughout history connecting to their communities–not necessarily poking fun at conservatives until we get to our current president, who has perhaps never looked good in a photo. One wonders if this is setting up a one-sided diatribe for the country’s current political failings but by the film’s end, it is made abundantly clear with the heaviest of hands that Stewart has issues with the entire system of the electoral process. (How and when the true meaning of the title is revealed will leave any viewer in a dumbfounded state.)

Early on in the story, Gary Zimmer (who one imagines is partly a cipher for the director) is speaking to a group in the Wisconsin town and ponders why “guys like me can’t talk to guys like you.” To begin to answer that question, perhaps part of the reason is a film like Irresistible, which finds little to connect to on either an empathetic or comedic level, regardless of one’s political affiliation. With a release clearly timed for this year’s election, anyone in the country would be far more edified watching a documentary like the forthcoming Boys State if they want a glimpse into the weaknesses of our current political system and a vision for a better future.